Advent expects the STC for the PC-12 eABS system to be issued later this month.

Advent Aircraft Systems is reporting that they’ve completed the necessary FAA flight testing for using their anti-skid braking system with the Pilatus PC-12 series. According to company officials, once the STC is issued, this will mark the first time an anti-skid braking system has been offered for the PC-12. So far, the Advent eABS is currently certified for use with the Eclipse EA500/550, King Air B300, and T-6 Texan B/C, with certification for use with the King AirB200 pending.

Advent says that the company’s flight tests were carried out at the Sanford Seacoast Regional Airport (KSFM), on Sunday, March 26, 2017, followed by the formal FAA flight tests on Thursday, March 30, 2017. Peter Simpson, the pilot-in-command for the FAA flight test, said that “the new stopping performance of the airplane was remarkable and exceeded expectations, with excellent directional control throughout all test events.  The technology of the system integrates perfectly with the PC-12.”

Advent reports that a total of sixteen hard braking events were performed at light, medium, heavy, and maximum weight conditions during the two days of the company and FAA flight tests. Eight events (six landings, and two accelerate-stops) were conducted on each day, and all sixteen events were conducted with the same single set of tires and brakes, which showed “negligible wear” after the testing was concluded.

The FAA tests, which were conducted with both dry and wet runway conditions, recorded an average 24% reduction in all stopping distances, with landing rolls reduced by an average of 26% and maximum takeoff weight accelerate-stopping reduced by an average of 19%. Reduction in maximum weight accelerate-stop distances came out to 620 feet in dry conditions, and 520 feet in wet conditions. In order to meet regulations, all the tests were performed “without the use of reverse thrust and compared to the Aircraft Flight Manual (AFM) distances for the day’s conditions.”

Advent says this offers a “substantial new safety margin” for operators in the case of aborted takeoff, and the land roll reductions offer less risk at all weights, offering PC-12 operators “an alternative or complement to the use of reverse thrust.”

According to company officials, for certification, Advent only needed to demonstrate to the FAA safe operations of the systems and that stopping distances for eABS equipped PC-12’s were no worse than the existing AFM values. They added that subject to customer demand, they would “consider seeking FAA approval for a revision to the AFM to incorporate the reduced stopping distances demonstrated during testing.” Advent expects the STC to be issued in April and has the first installation scheduled for mid-April, at Pilatus authorized service center ProStar Aviation.

The company says that those interested in the Advent eABS system can order it through most Pilatus authorized service centers, or contact Advent’s VP of Marketing and Sales, Tom Grunbeck, at (203) 233-4262 for more information. 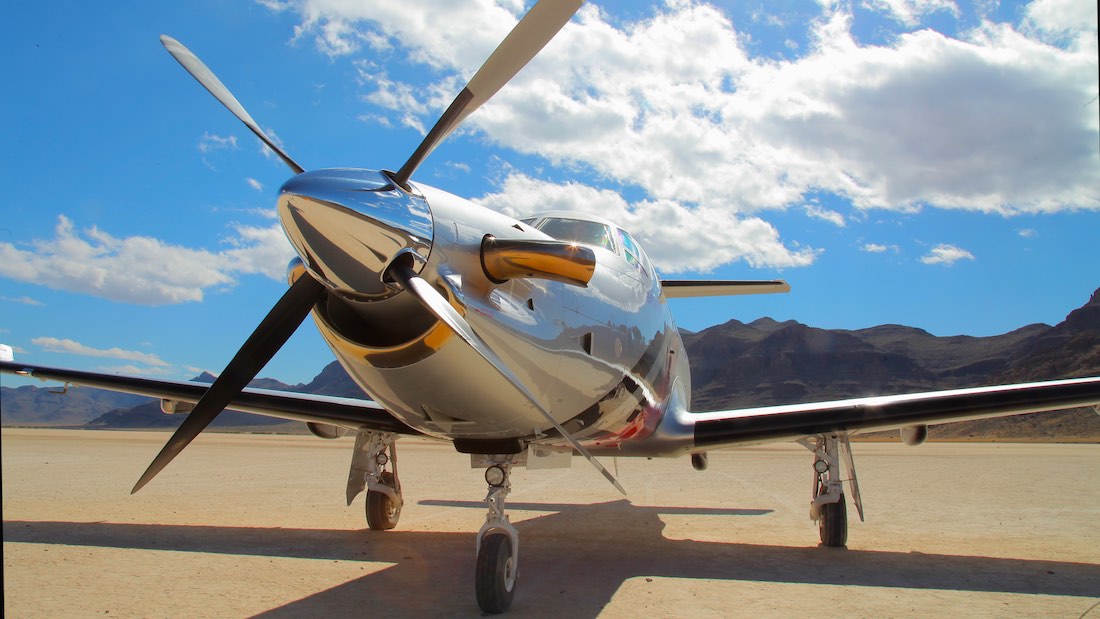 “We want a video that really shows off this airplane, and we want it done in an exotic looking place.” That was the entire blueprint we had, and all anyone knew. My teacher (CFI) and good friend Jim shares my stress on these jobs, or at the least he seems to provide a calming kind of support by making himself available to discuss my doubts. Each time we have done one of these aviation projects, Jim has been the one who brought it to us, and his name being on the line along with mine [Click to read more…]