The NTSB accident docket for the American Airlines Flight 383 engine failure will be opened at a later date.

The NTSB has issued an update as part of their ongoing review of the American Airlines Flight 383 engine failure. The incident, which took place on October 28, 2016, at Chicago O’Hare International airport, happened during the take-off roll of the Boeing 767-300 (N345AN). Immediately after the incident, an emergency evacuation was conducted for the 161 passengers and 9 crewmembers onboard.

Timeline of the Accident From the Update 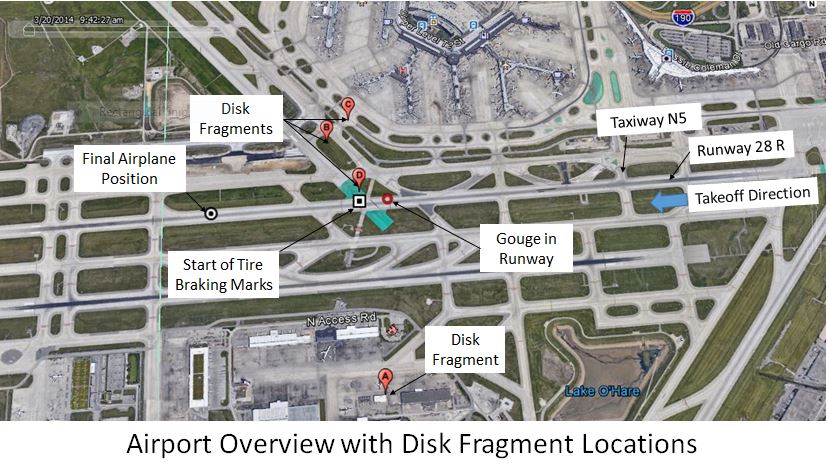 Graphic courtesy of the NTSB

Details on the Fractured Engine Disk

A stage 2 high-pressure turbine disk in the right engine fractured into at least 4 pieces (locations A, B, C and D on the graphic above). The piece found at location A was propelled through the inboard section of the right wing, over the fuselage and into a nearby UPS warehouse. 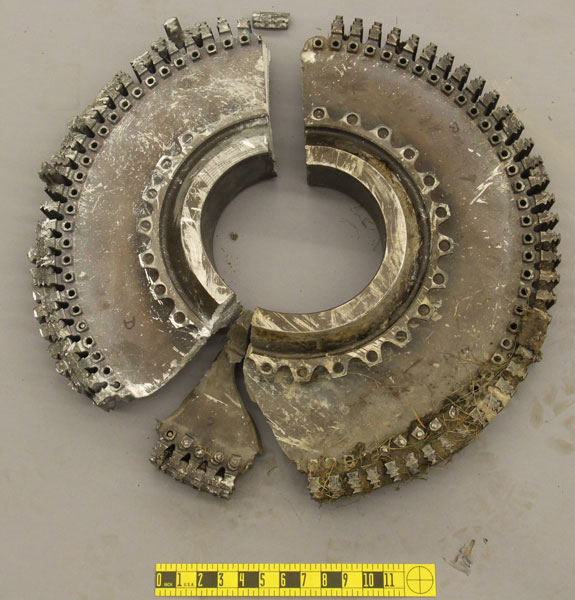 The majority of the disk was recovered and sent to the NTSB laboratory in Washington DC for a more detailed examination. The NTSB has found that one of the fractures on the disk “exhibited features consistent with fatigue cracking initiating at an internal inclusion near the forward side of the hub’s inner bore.”

The NTSB says that the disk had 10,984 cycles, with a life limit of 15,000 cycles, and that a review of the engine maintenance records, manufacturing records, and associated processes are ongoing. In addition, the disk will undergo metallurgical examinations focused on “detailed characterization of the inclusion and the fracture surfaces.”

Additional debris from the engine and wing were found around the area marked “gouge in runway” on the above graphic.

In addition to the NTSB, the FAA, American Airlines, Allied Pilots Association, Boeing, General Electric Engines, the Transport Workers Union of America and the Association of Professional Flight Attendants are also parties to the investigation.

The official accident docket for the American Airlines Flight 383 engine failure with associated factual reports and other material related to the investigation will be opened at a later date, and the NTSB will release more information as warranted.

Featured Image: Grant Wickes, CC2, Note: This is not an image of the actual aircraft involved in the incident.