Got questions about ADS-B? The March-April 2017 FAA Safety Briefing covers everything you need to know.

There’s a lot to know about Automatic Dependent Surveillance-Broadcast (ADS-B). So in order to continue preparing pilots to be ready for the upcoming January 1, 2020, ADS-B deadline, that’s the FAA’s focus for the March-April 2017 FAA Safety Briefing: everything from the benefits of ADS-B, to details on the purchase, installation, and operation of ADS-B equipment. So, let’s a quick look at the many articles the FAA has prepared, and what else is being discussed in the latest issue of Safety Briefing.

An Overview of the March-April 2017 FAA Safety Briefing

In ADS-B 101: What It Is, and What It Means to You, the FAA Surveillance and Broadcast Services (SBS) Office (who is responsible for implementing ADS-B into the National Airspace System) covers all the basic questions, including ‘How Does ADS-B Work?’ It also covers the requirements to meet the ADS-B mandate and the many benefits for general aviation. Also, though I know what the acronym stands for, I found even their brief explanation of each of the different pieces interesting:

For Getting it Right: What You Need to Know About ADS-B Installation Errors, pilot, ground instructor and Safety Briefing associate editor James Williams covers three specific areas relating to ADS-B installation. First, he takes a look at what you need to know when selecting a shop/mechanic to do the installation work. Next, Williams takes a look at some of the common problems that can occur during the process. And finally, he offers advice to aircraft owners on what they should expect and what to look out for before they accept an installation.

Up next, the FAA’s SBS Office tackles the agency’s rebate with Everbody Loves a Rebate: The FAA’s General Aviation ADS-B Rebate Program Explained. In covering all the requirements in order to be eligible for the rebate, they also reveal that as of January 1, 2017, an estimated 4,000 rebates have been claimed, and the monthly equipage rates for eligible aircraft has almost doubled. 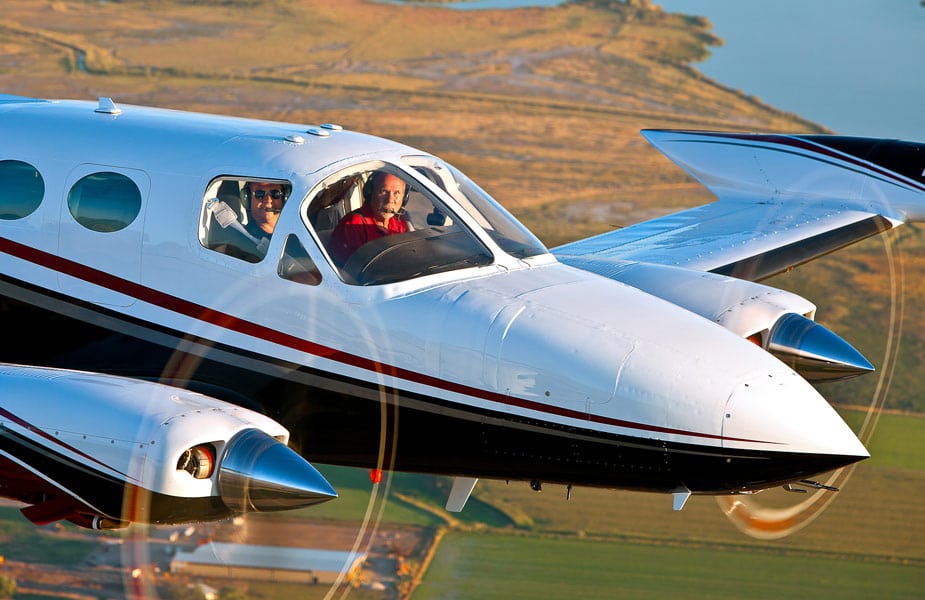 We all want to fly safely, yet, each year NTSB records reveal the same stubborn problems. While it’s true some aircraft accidents are caused by mechanical failures, pilot incapacitation, and the ever-mysterious “unknown causes,” when looking at AOPA ASI’s “Joseph T. Nall Report” over the last decade, nearly three-quarters of accidents are “pilot-related.” The report points out that most pilot-related accidents are the result of specific failures of flight-planning, decision making, or [Click to read more…]

Commercial pilot and Managing Editor of the FAA Safety Briefing Tom Hoffman follows, with What’s in a Name: How to Avoid an ADS-B Call Sign Mismatch. According to Hoffman, a large number of the operational inconsistencies with ADS-B Out so far are a result of Call Sign Mismatches (CSMM). A CSMM happens when an aircraft’s identification listed in a flight plan doesn’t exactly match the ADS-B transmitted identification. And while Hoffman notes that most GA pilots likely won’t have to deal with this problem, it’s important to understand the problem and be sure that your ADS-B Out system was properly installed and configured. 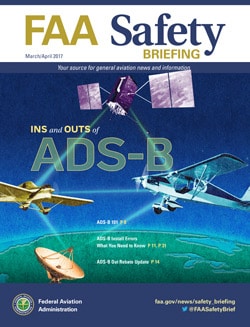 Finally, Safety Briefing assistant editor and student pilot Jennifer Caron takes a look at the Top 10 Things You Need to Know About ADS-B. This includes such topics as why portable ADS-B Units are not an option, and how the airspace you fly in helps determine the type of equipment you’ll need.

And if that’s not enough, the March-April 2017 FAA Safety Briefing also covers such things as some techniques to correctly set up the ADS-B system, how ADS-B helps with the “See and Avoid” technique, and ADS-B and helicopters.

To read the March-April issue of Safety Briefing, click here, or on the image to the right. You can also visit the main Safety Briefing page, where in addition to the PDF version, they also offer an ePub version (for iPads and Nooks) and a Mobi version (for Kindles.)