Full-time Skywriting is More Complicated Then You Might Think

Suzanne Asbury-Oliver and her husband and co-pilot Steve Oliver are unique. They are perhaps the nation’s only full-time skywriters. In a typical year, they write about 500 sky messages in 150 locations nationwide. 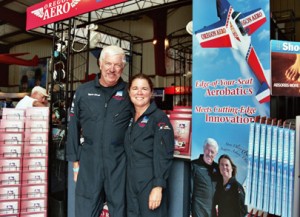 “We do everything from marriage proposals to commercial stuff,” Asbury-Oliver told Bloomberg Businessweek. They announced a Lady Gaga tour on the blue canvas over Miami. They do wedding proposals, congratulatory messages, corporate stuff and more.

“It requires an incredible level of precision flying,” Oliver says, noting the duo can write as many as 25 letters while flying their 1956 de Havilland Chipmunk with a modified 27-gallon smoke oil system. “There are so many factors. Where’s the sun, which way is the wind blowing, where’s your crowd? You only learn that over time, after doing it enough. And you can’t go practice when skywriting fluid is $10 a gallon and gasoline is $7 a gallon.”

One reason Asbury-Oliver and Oliver are among the only skywriters in America is because, well, they won’t share their secrets.

For those interested in having their own message written in the skies, Asbury-Oliver warned it’s extremely expensive.

“People call us because they want to invite their girlfriend to the prom or whatever,” Asbury-Oliver says. “They think it’s going to be a couple hundred bucks. But then I lay out the expenses and explain to them that they’re looking at multiple thousand dollars. That usually scares everyone away.”

Check out this full article to learn more about this fascinating couple, their business, and the art of skywriting.