Why the Aviation World Needs More Groups Like the IAA

One of the exciting new ways the IAA is supporting the safety of their pilots is their “Stuck ‘n’ Stay” program.
Carly Courtney, December 15, 2016
5K 1
Home » Aviation Articles » News » Why the Aviation World Needs More Groups Like the IAA
23
SHARES
ShareTweet

According to the FAA, in 2011 there were just under 196,000 private pilots, a number which has been fluctuating but on the decline since the late 1970’s. There is much speculation as to why the interest in getting a pilot’s license has been fizzling out; financial concerns, fear, and the concept of inaccessibility that plagues many interested would-be pilots. I’ve faced the same roadblocks and spent my entire life believing the world of aviation to be a dimension totally separate from the one non-pilots existed in. After I dipped my toes (and have since jumped in screaming, “Cannonball!”) into the world of pilots, I’ve realized two things:

There is a sense of community between pilots like nothing I have ever felt before. Since I’ve began writing for Disciples of Flight, people have written to me and thanked me for sharing my experiences with non-pilots, in hopes that they too will catch the bug and become pilots themselves. It’s like a global network of friends you’ve never met who just want you to make the best decision of your life; no ulterior motives, no dastardly plans. Pilots simply love flying so much that they can’t contain it within themselves, and thus need to share it with other people.

That sensation, that urge pilots have to share their passion is the closest thing I’ve ever experienced to true altruism, which makes flying even that much more beautiful. The Idaho Aviation Association (IAA) which was organized in 1989, is, in my experience, a fantastic representation of the very best of pilots.

Encouraging flying in the “Gem of the Mountains” 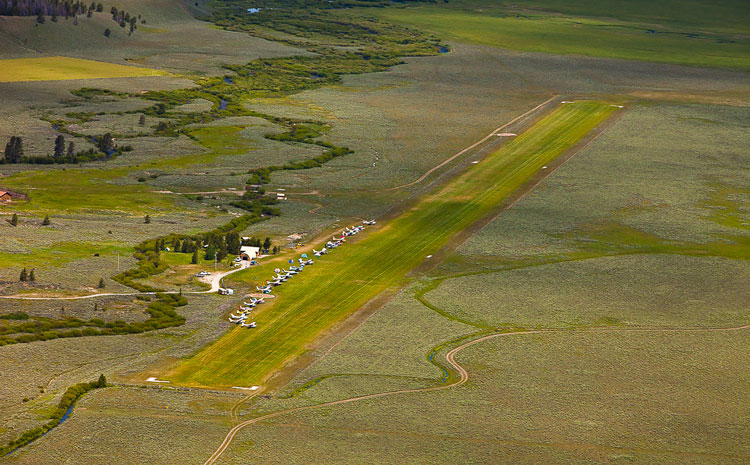 The IAA is an organization of (mostly) backcountry pilots who dedicate themselves to the repairs and preservations of Idaho’s many scenic and secluded airports and backcountry airstrips. To achieve their goals, the IAA acts as the front line for all aviation issues, primarily by coordinating with and educating the authorities whose decisions affect the airstrips they work to protect. In addition to their active participation in the industry on behalf of the IAA, each member is infected with that passion for sharing aviation with friends, loved ones, and anyone else who’ll listen.

That means preserving and improving airports and airstrips for general aviation, but the IAA also takes every chance they get to better educate their fellow pilots to be safer, stronger aviators. In my interactions with them, I’ve not only noticed that indescribable love for flying that makes certain pilots wonderful, but a no-questions-asked willingness to help their fellow aviators in times of need.

One of the exciting new ways the IAA is supporting the safety of their pilots is their “Stuck ‘n’ Stay” program. Taken from the IAA’s website, the new programs mission is described as a method to “reduce accidents often associated with ‘get-home-itis’ or ‘get-there-itis;’ the tendency for pilots to continue a flight to the destination, even if the weather is deteriorating or the aircraft has a problem.” The IAA has a member base of over 1,000 active pilots, many of which who have now signed up to provide “last-minute overnight stays to stuck (IAA) pilots and their passengers at no charge.”

The “Stuck ‘n’ Stay” program is simply the latest and greatest of the dozens of ways the IAA works tirelessly to improve the experiences of pilots braving the wilderness in Idaho for generations to come. To check the host list for the Stuck ‘n’ Stay program, or to sign up to be a host, visit this page on the IAA website. And if you plan on visiting and flying in Idaho’s backcountry, contact the IAA and support their goals to promote responsible use and stewardship of Idaho’s backcountry airstrips.