Backcountry flying, particularly in the mountains and canyons of Idaho, is like nothing else in aviation. True, a fair number of Americans confuse Idaho with Iowa, but they’re probably not pilots. Pilots know that Iowa is mostly flat farmland while the central part of Idaho is so rugged that hardly any roads go through it. Even its signature river, the Salmon, is called “The River of No Return.” That river runs through a mile-deep canyon, its walls covered in dense pines except for those places so steep the granite is bare. And beside the Salmon River, all its forks, and the myriad other rivers, streams, and creeks that run through even more rugged canyons, sit a plethora of the most beautiful backcountry airstrips in the world. In the past, only a select few old-timers knew about these gems. Information was word-of-mouth, and you took your life into your hands if you tried to fly into many of them on your own. But things have changed. More pilots are discovering the joy of flying into Idaho’s backcountry beauties. Indeed, a few years ago, sitting in the cockpit of a British Airways 747-400 (after we had landed on a flight from London to Chicago), the dapper-looking Captain told me about his absolute favorite thing to do aviation-wise: Hop a flight to Idaho, rent a Cessna, and fly in and camp at Johnson Creek. Idaho’s reputation as a backcountry Mecca is truly worldwide.

How have people so far away been able to get information about these hidden gems? Largely due to a little book, often called the “Backcountry Bible”—Fly Idaho! by Galen L. Hanselman. 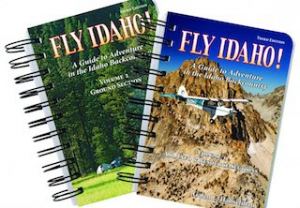 The big news is that an ALL NEW fabulous Third Edition has just been released.

I would argue that Galen Hanselman has done more for backcountry aviation in Idaho than any other single living person. His books, articles, and aeronautical charts are used by thousands of pilots across America and the world. Nearly every pilot in Idaho who flies the backcountry carries a copy of Fly Idaho! in the cockpit. And after five years of painstaking labor, the all-new Third Edition of this indispensable guide is now available.

As Harrison Ford says in the book’s Foreward:

“Don’t leave home without it.”

Since its initial publication in 1994, Fly Idaho! and his other books have accomplished what their author intended:
Provide accurate, easy-to-use data about backcountry airstrips, many of which are not shown on standard aeronautical charts. This helps the pilot determine whether he or she has the necessary skills and equipment to safely operate at any given airstrip. Increase public awareness of irreplaceable backcountry airstrips, and the organizations that are dedicated to preserving them, the Idaho Aviation Association being one of the most prominent. Increased interest in backcountry aviation helped spur the creation of the Recreational Aviation Foundation.

As pilots have begun to explore backcountry destinations with the help of Hanselman’s books, they have brought their dollars to nearby FBOs, mountain-flying CFIs, outfitters, guides, hotels, restaurants, and other businesses.

How did all this happen? Born in Ohio, Hanselman moved to Ketchum, Idaho with his family at age 14. He grew up fishing and exploring the nearby rivers, creeks, and mountains, graduated with a B.S. in Physics from the College of Idaho, and then started a business designing and installing residential and commercial fire and security systems in the Sun Valley area. Hanselman started flying in 1980 at the age of 32. With the aircraft, he was able to do installations throughout Idaho and as far away as California, Texas, and Massachusetts. 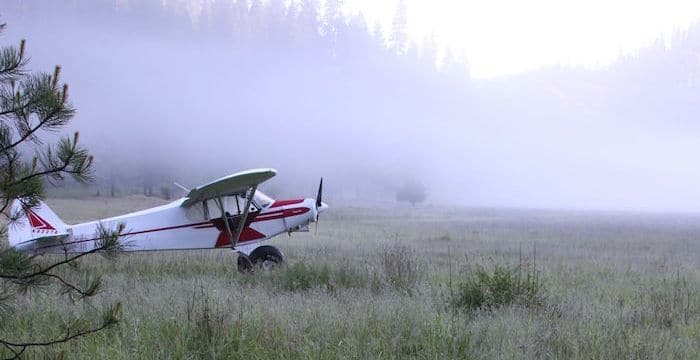 Hanselman often heard his flying buddies, one of whom flew a Super Cub, talk about their experiences in the “backcountry.” Hanselman had newly transitioned to a Cessna 182, and he decided to fly to Sulphur Creek. As he touched down (too fast) he realized the runway was much shorter than he expected. Locking the brakes, he nearly skidded off the end of the runway.

Before trying that again, he got specialized backcountry flight instruction (one excellent source is Lori MacNichol’s McCall-based flight school), but, as the years passed and Hanselman explored more of Idaho’s backcountry airstrips, he realized most of his information was simple word of mouth. Having recently sold his business, he decided to systematically and scientifically document as many of Idaho’s airstrips as possible and publish his findings in a book. This would give other pilots accurate information to help them decide whether or not they had the skills and equipment to safely fly into each particular airstrip.

Besides, it gave him a great excuse to visit every backcountry Idaho airstrip.

Hanselman developed a system, the “Relative Hazard Index,” or RHI, which assigned a number between 0 and 50 to each airstrip, with 50 being the most difficult.

The RHI is broken down into three vital components:

This factors in runway length, elevation, and surrounding terrain. 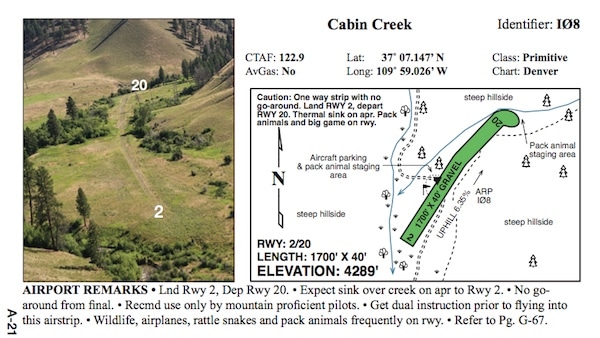 This takes into account obstacles, water, go-around opportunities, visibility, and non-standard patterns, among other hazards.

This factors in runway surfaces, erosion, dog legs, windsock (or lack thereof), adverse gradients, and so forth.

A quick glance at the RHI instantly gives a pilot an idea of the difficulty of operations at a particular airstrip. The RHI is augmented by vertical and horizontal photographs of the airstrip, taken by Hanselman from the air, that show each runway and its surroundings, with runway numbers superimposed on the photo. Runway length, elevation, lat/long, and commentary supply additional information.

In order to provide a complete guide, Hanselman added recreational information, such as where to camp, fish, hunt, hike, visit hot springs, etc., to each airstrip’s information. He also included historical anecdotes, many of which are hilarious. The book, Fly Idaho!, was published in 1994 after more than a year of work, and could soon be found in nearly every backcountry pilot’s cockpit.

After the initial 1994 publication of Fly Idaho!, Hanselman turned his attention to other areas with backcountry airstrips. He spent four years researching and writing his follow-up work, Air Baja! He then published Fly the Big Sky!, a complete guide to Montana’s airstrips. His next project, Fly Utah!, suffered a one-year delay as a result of an accident. An updated Second Edition of Fly Idaho! was published in 1998, with several subsequent printings.

By 2010 however, some of the information presented in Fly Idaho! had become outdated. Trees had grown, lodges opened or closed, and runways had lengthened or shortened. Hanselman decided it was time for a completely new, updated version of Fly Idaho!, his biggest project by far.

The all-new Third Edition of Fly Idaho! is a whopping 946 pages, compared with 456 pages in the previous edition. To accommodate all this new info, the book is split into two Volumes, which arrive in a beautifully-designed custom slipcase. The first Volume contains the “Air Section” and covers 83 airstrips, compared with 71 in the 2nd Edition. Four pages for each airstrip have been designed to give the pilot quick access to all pertinent information needed for safe operations at each strip. Most pilots start by looking at the Runway Hazard Index (RHI) in the corner of the first page. A quick glance at the RHI instantly allows the pilot to gauge the difficulty of operations at a particular airstrip. The RHI is augmented by all-new vertical and horizontal photographs of the airstrip, taken by Hanselman from the air, that show each runway and its surroundings, with runway numbers superimposed on the photo. A diagram of the airstrip with runway length, elevation, lat/long, and commentary supply additional information. 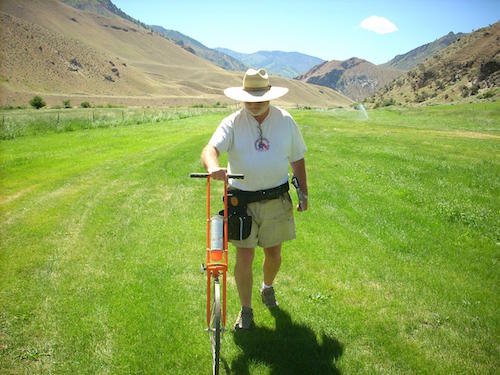 Hanselman is a stickler for accuracy. I assisted him in taking measurements at several of the airstrips. At one airstrip, he discovered the battery on his GPS/altimeter device was dead. I had just purchased a new smartphone with GPS, compass, and altimeter functions, so I suggested we use it to determine the elevation and runway directions. He used my phone but flew back to the strip later to confirm the data with his own equipment.

The new Third Edition also provides two diagrams first introduced with the Utah book, the Runway Elevation Profile, and Terrain Elevation Model. After Hanselman crashed in Utah attempting an uphill takeoff from a deceptively sloping runway, he developed a system to measure runways slopes. For the new Idaho book, he used an improved system, a rotating horizontal laser. The author personally visited every airstrip in the book and painstakingly measured the length and elevation of each runway, as well as the runway slope and elevation changes. To operate safely in the backcountry, it’s crucial to know whether an airstrip is up or downhill, and how the slope may change. The Runway Elevation Profile provides that information at a glance. The Terrain Elevation Model shows surrounding terrain, similar to a topo map, which helps the pilot plan a safe descent into a canyon and quickly shows the best way out in case of a go-around.

What else does Fly Idaho! have to offer?

• The Zen of Fly Fishing

• Indians on the Middle Fork

• Author’s Promise to You

• Dumb Things I Promise Never to Do Again (This I love—it’s a blank page with lines for the pilot to fill in after he/she does something dumb, to be initialed by spouse or significant other) 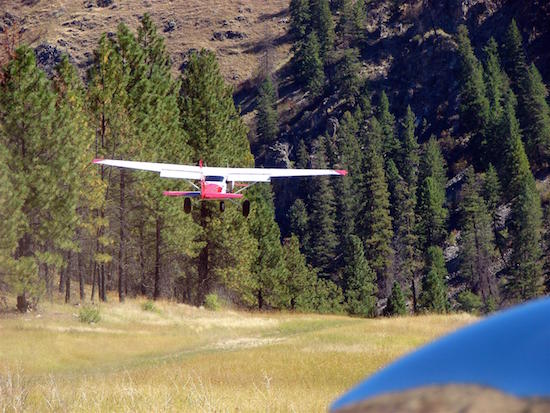 Buyers of the book will be able to access updates on the website. Orders come with a money-back guarantee, two-volume book in slipcase is $59.95, eBook is $39.95, www.FlyIdaho.com.

ForeFlight users will want another new product Hanselman has just designed, called the Backcountry Idaho User Waypoint file. What is this? Fly Idaho! contains 17 airstrips not shown on FAA aeronautical charts. Hanselman has created user waypoints for these airstrips and put them into a file that can be imported into ForeFlight. As the author says, “Want to fly from Sun Valley to Big Bar? No problemo! The User Waypoint name for Big Bar is (surprise!) BIGBAR. In ForeFlight’s NavLog, enter KSUN and BIGBAR and bingo, distance, fuel, ETE and ETA based on winds aloft, and bearing to destination are all shown in exquisite detail as well as the magenta course line and the exclusive BIGBAR waypoint precisely located on the moving map. Want to fly a backcountry route? No problemo! Mix and match as many of the Idaho User Waypoints along with the identifiers of published airstrips and off you go.” 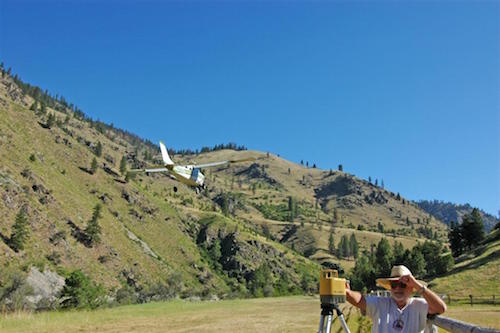 Hanselman’s thoroughly researched books have enhanced the reputation of backcountry flying immensely—as an activity to be enjoyed responsibly. His work has stood the test of time and will continue to assist pilots far into the future. With this book in hand (and proper training, skills, and equipment), you’ll be able to plan unforgettable trips into some of the most beautiful places in America. And over the winter, pull up a comfy chair in front of the fireplace, because this book is also a great read. Hanselman speaks with a unique voice and has a talent for digging up fascinating, and funny, bits of backcountry history and crazy characters. Once you read it, you’ll see why Fly Idaho! is treasured by pilots far and wide.