The Super Seawind Aircraft is Literally One of a Kind

Massachusetts pilot/aircraft builder Steve Wightman’s personal aircraft is unique—literally. Wightman flies the only turbine-powered Seawind in the world, and it’s a beauty. If you’d like to get a close look at it, Wightman will be flying his Super Seawind aircraft to Oshkosh this July, before he takes it to Alaska. The Super Seawind is a bit of a tortoise-and-hare story: a long, slow process to build what is surely the fastest, highest-flying single-engine amphibious airplane anywhere.

Wightman’s involvement with aviation began with model airplanes, which he flew as a teenager. The Massachusetts native then served in the Army as an aircraft repairman and crew chief from 1966–69. Aircraft he both worked on and flew in as Crew Chief included DeHavilland Otters and Beavers, Beech Queen Air, and a variety of helicopters. In 1997, working through the USAF Aero Club at Hanscom Air Force Base in eastern Massachusetts, Wightman earned his private pilot certificate. He flew the club’s Skyhawks, Cherokees, and Arrows. Later he added an instrument rating, high-performance, complex, and tailwheel endorsements, and a seaplane rating.

Seaplane training made Wightman realize he wanted a plane that could both land anywhere and carry his friends. He soon learned of the Seawind: a relatively new amphibious flying boat-design aircraft that was modern-looking and made of composite material so it wouldn’t rust.

History: What is a Seawind?

Let’s take a moment to clarify what a Seawind is, and what it is not. A Seawind is not a Searey. Searey is a company now located in Tavares, Florida (“America’s Seaplane City”) that offers three models of aircraft: the factory-built, turbo Rotax 914-powered Searey Elite, the factory-built, Rotax 912-powered Searey Sport (both Light Sport airplanes), and the Searey LSX kit. These are all two-seat, flying boat configuration amphibious aircraft that normally cruise at around 80 knots, with a range of about 360–380 statute miles with reserves. (Famed aviation author Richard Bach owns a Searey named “Puff” that he flew across the country low and slow, a trip he described in his book Travels With Puff. Bach was seriously injured when he crashed his plane after clipping power lines on approach to an airport in Washington state. He had his airplane repaired and is flying again.) 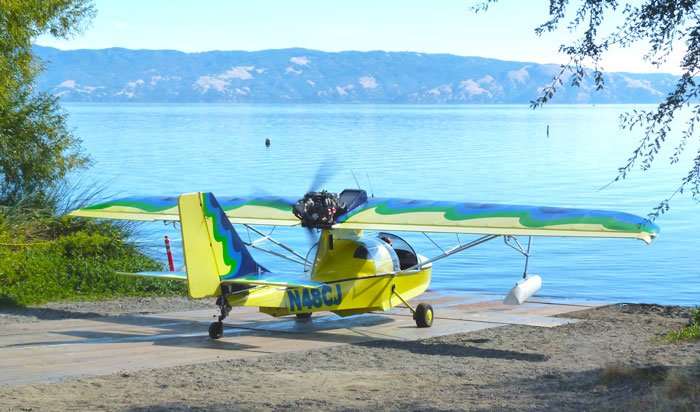 The Seawind aircraft design originated in Canada and first flew in 1982. The Seawind 2000 kit was produced and sold by Seawind International of Haliburton, Ontario and powered by a 200-hp engine. The Seawind 3000, powered by a 300-hp engine, was introduced in 1993 and acquired by Seawind North America (SNA), based in Kimberton, Pennsylvania. In 2002, SNA suspended production of its kits to focus on building a factory-produced airplane based on the Seawind 3000: the Seawind 300C. Certification of any new aircraft is a daunting proposition, and SNA has been hampered by lack of funding and the crash of a prototype, although the company still intends to certify the airplane and about 50 customers still hold delivery positions.

Wightman became interested in the Seawind after he learned of its capabilities: a 4-place aircraft that could cruise at 200 mph. Its 1,000+ pound payload included up to 110 gallons of fuel capacity for a range of at least 1,000 statute miles with reserve. At the time, in the late 1990s, standard Seawind kits cost just under $60,000. SNA estimated that additional necessary components not included with the kit would run between $40,000–$65,000.

(Interestingly, this was about the same time, in the late 1990s, that my husband and I became interested in the Seawind for the same reasons as Wightman; we just didn’t want to build an airplane.)
But Wightman wasn’t put off. He began attending Seawind fly-ins, talking with other builders, and comparing notes. In October 2000, he drove his trailer to the SNA headquarters in Pennsylvania, picked up a Seawind 3000 “Kwick Kit,” and headed home to New Hampshire. SNA’s estimate of build time for a standard Seawind was 2,000 hours. The Kwick Kit, which provided some major components pre-assembled, cost an extra $14,500 but reduced the estimated build time to about 1,600 hours. Wightman’s plan was to build his Seawind within five years. 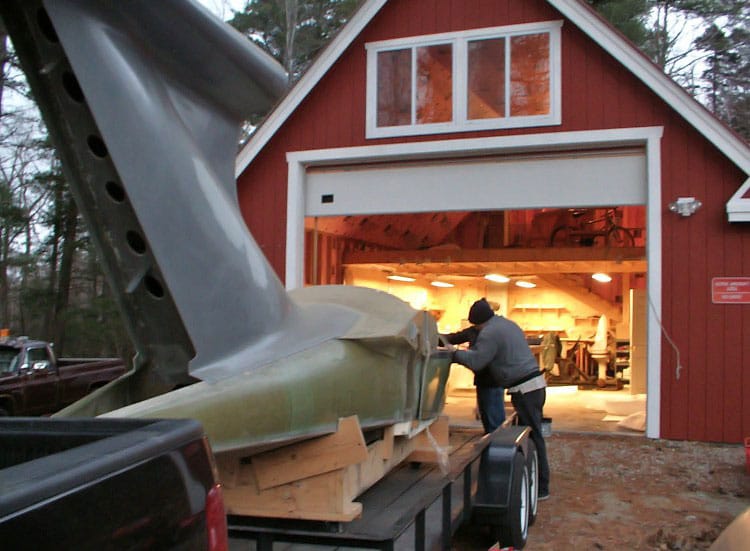 Flash forward five years to late 2005: Between commitments to work and family, lack of experience and specialized equipment, and temperature extremes in his garage, Wightman had only spent, at most, the equivalent of six month’s worth of weekends building his airplane. At this rate, the airplane might never be finished. He contacted the build-assist shop Planemakers, located in Sarasota, Florida, and the company transported the partially-assembled kit to their headquarters. With the benefit of the company’s experienced builders, specialized tooling and resins, and resin-friendly temperatures, Wightman began to see progress. Soon it would be time to install the recommended 300 hp, IO-540 six-cylinder engine. But … 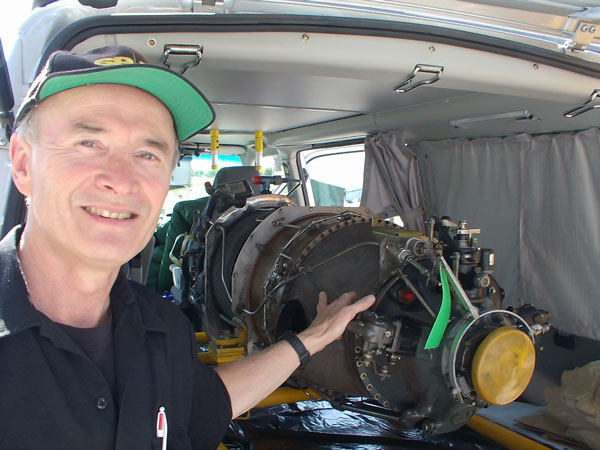 The more Wightman thought about it, the less he liked the engine, which weighed in at 530 pounds. By contrast, the reliable Pratt & Whitney PT6A-20 turbine weighed just over half as much and produced nearly twice the thrust, 550 hp. The extra thrust would allow even the fully-loaded Seawind to lift off from the ground or water in a much shorter distance. With the PT6A-20, the airplane would also be able to climb 2–4 times faster. Not needing to use 100LL Avgas would be another plus: Jet-A is usually less expensive than 100LL and in many parts of the world, Jet-A is the only fuel available.

As Wightman said, “With leaded gas headed toward extinction, I wanted a long-term solution for my Seawind.” That said, according to the P&W pilot operations manual, the PT6A can burn up to 150 hours of AvGas, good in a pinch. Additionally, Pratt & Whitney has an excellent support network that can provide training, parts, fuel and maintenance facilities worldwide. But could the aircraft be modified to accommodate the turbine? Wightman decided that it could, and purchased a refurbished and tested PT6A-20. 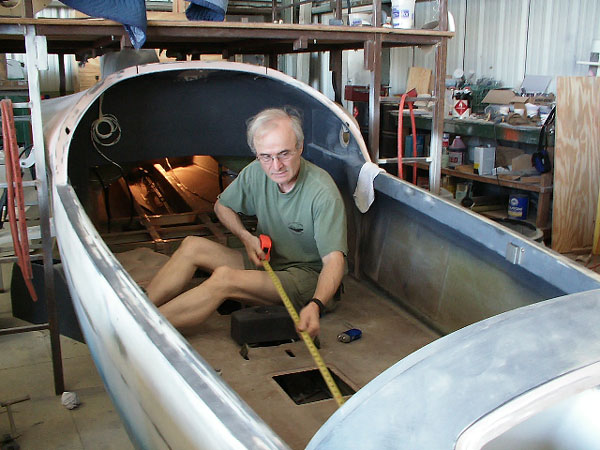 With the new engine and higher performance capabilities in mind, the vertical stabilizer was reinforced. Controls, cables, and wiring were custom-fitted to the PT6A-20. A unique carbon fiber cowling was designed and built. A stronger engine mount would also be necessary. Wightman was referred to the now late Bud Gustin, who had also been working on the idea of a turbine-powered Seawind. Gustin shared a copy of his engine mount design and mold. After fabrication and mounting, Wightman and Planemakers found that the mount fit the engine to the airframe perfectly. To translate all that power into speed, Wightman added an all-composite MT constant-speed prop. A five-blade, 74-inch propeller, instead of the usual 76-inch, 3-blade prop on typical Seawind builds, was needed to work with the restricted clearance as well as handle the torque created by the application of 550 hp. 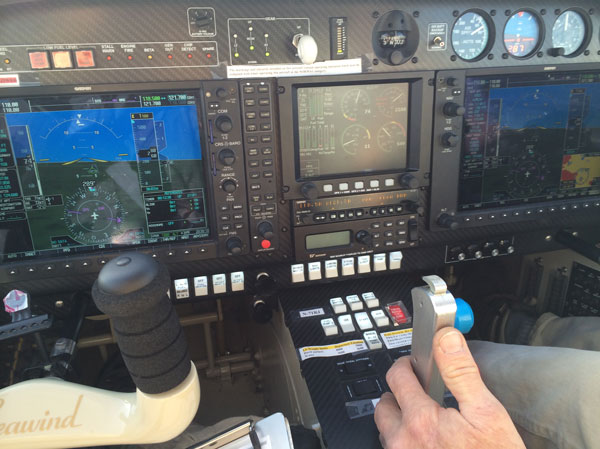 With the aircraft frame and powerplant finished, it was time to think about instrumentation. Jason Smith of Aerotronics, Inc. supervised the construction of the avionics panel. Each wing received its own pitot-static system, and steam gauges were installed in the panel as secondary back-ups. But the heart of the new avionics system was a Garmin G-900X equipped with synthetic vision, accompanied backed by a Grand Rapids Technologies (GRT) EFIS also with full MFD functionality, satellite weather, engine monitoring system, and a two-axis Tru Trak autopilot, the Sorcerer, capable of flying the airplane even if all other instruments failed. A Ray Allen 3-axis electronic yoke keyed trim would make cruising and landing much easier, especially in IMC. The arrangement offered excellent redundancy, position awareness, weather, synthetic vision, GRT highway in the sky (HITS) traffic and full hard IFR-capability—a high-end system for any general aviation airplane, especially an experimental.

Now it was back to Florida and time to attach all the big pieces—wings, rudder, and elevator—to the airframe, sand everything to perfection, and paint. In February 2012, nine years and three months and some 15,000 man-hours after he purchased his kit, Wightman’s Super Seawind received its FAA airworthiness certificate.

Wightman’s Super Seawind, N71RJ, first flew on March 15, 2012, from SRQ in Sarasota, Florida. The pilot, the now-late Wisconsin-based CFII Jack Ardyno, who had flown 27 different Seawinds, said the “…plane did not disappoint me. It climbed from 5,000 to 10,000 feet at 2,000 fpm at an almost uncomfortable nose-up attitude, in contrast to the 400–500 fpm climb of a Lycoming-equipped 300-hp Seawind.” 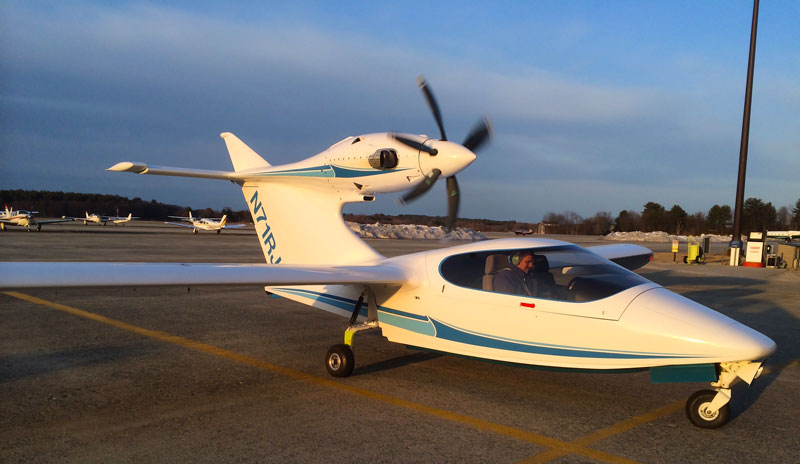 Wightman’s first solo in his Super Seawind occurred at VNC in Venice, Florida. He commented, “I think I was more scared than when I was serially sniped in a prior life in Panama. Lined up on the runway with 20° flaps, I advanced the throttle and pulled the yoke simultaneously full aft. 1RJ lunged forward like a racehorse out of the gate. Ten seconds later and yoke now neutral, I was airborne and climbing so fast that I popped above pattern altitude.

With my pounding heart now in my throat, I turned crosswind and then downwind and set up for my first landing. On final, I was too fast and too high so I went around for another try. On final, I could see Jack off to the side. I don’t know who was sweating more at that moment. With flaps at 40°, I touched at 70 knots and stayed on the main wheels and rolled down the runway. From that day on, it was lots more of the same. I then graduated to my favorite, lake landings. Jack said our runway distance markers were now alligator counts.”

By June, Wightman was ready to bring his new baby home. He and Jack departed Florida enroute to Bedford, Massachusetts. While using oxygen at 19,000 feet MSL and 1,900 rpm, they trued out at 193 knots (about 222 mph) at 78% power with flaps set to minus 10°. In 2014, Wightman flew the Super Seawind to Oshkosh with CFII Jay Drury at up to FL 170 (again, with oxygen masks) where it demonstrated its range, with reserves, of more than 1,000 miles.

Super Seawind N71RJ just finished an extensive “annual” that took 19 months and about 1,500 man-hours, during which Wightman and Jay Drury, AI, made a number of significant changes and safety improvements. For example, they removed the 35-gallon center fuel tank, lightening the airplane by 50 pounds. Wightman now plans to use his airplane to help rescue pets as part of the Pilots n Paws program. As mentioned earlier, Wightman will fly his Super Seawind to Oshkosh again in 2016, where it is sure to attract a crowd.

In the time leading up to Oshkosh, he also plans to set a speed record flying from Bedford, Massachusetts to AOPA Headquarters in Frederick, Maryland with his friend Herbert (Jay) Drury, CFII, AI. Toward the end of the summer, he will head to Alaska, using his Super Seawind aircraft to visit the incomparable turquoise lakes of both Katmai and Lake Clark national parks and journaling the trip with three mounted GoPro cameras. One of the GoPros will be mounted on an iPhone controlled drone for aerial wildlife photography that’s sure to find its way to his plane’s website. 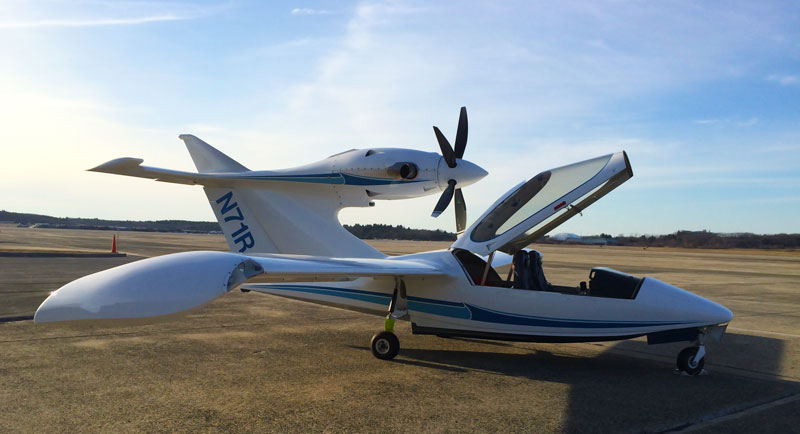 Wightman says, “1RJ has never been in better shape than now. My goal is to sell it to either the U.S. Coast Guard or U.S. Navy for reconnaissance and/or search-and-rescue operations. Neither has such an aircraft that can come close to 1RJ’s performance. It can fly twice the distance of a helicopter at far higher speeds and land in water too. The pilot can see terrain in pitch dark with synthetic vision. It’s an amazing airplane that James Bond would be proud to fly. In fact, I’d love to offer it for the next James Bond movie!”