NTSB Releases Report on Increasing Use and Effectiveness of PIREPs

The NTSB PIREP report provides safety recommendations for a number of aviation groups.

The NTSB (National Transportation Safety Board) has released a special investigation report calling for changes to both training and procedures for pilots, air traffic controllers, and others when it comes to pilot weather reports, or PIREPs, and the PIREP system. Their intent is to reduce the number of inadvertent encounters pilots experience with dangerous weather and prevent weather-related accidents.

The NTSB’s Acting Chairman Robert L. Sumwalt said that even with the many advances in recent years in the areas of weather modeling and forecasting, nothing could replicate the value of pilots reporting the weather conditions they’re encountering. He added “As a longtime general aviation and air carrier pilot, I can’t overemphasize the importance of PIREPs. They provide pilots of all types of aircraft with critical real-time information that can enhance safety for everyone in the skies.”

The report, with the long and official name ‘Improving Pilot Weather Report (PIREP) Submission and Dissemination to Benefit Safety in the National Airspace System (NAS)‘, began to take form after NTSB staff investigated 16 different aviation accidents and incidents in which weather was a factor. During the investigation, they identified several issues that reduced the effectiveness of PIREPs, which they felt fell into two broad categories: submission issues, and dissemination issues.

On the submission side, they felt pilots were not submitting enough PIREPs and that the pilot’s assessment of weather conditions were too subjective and they submitted PIREPs that were often inaccurate or incomplete. In addition, they felt that air traffic controllers were not consistently soliciting PIREPs during conditions that mandate such services. On the dissemination side, they felt ATC, flight service stations, or company personnel responsible for handling PIREPs could introduce delays and errors into the reports, or even fail to distribute them at all. Procedural inefficiencies, noncompliance, low priority being assigned to PIREP processing, errors in data entry, problems using data entry interfaces which include a lack of PIREP automation in NextGen systems, and proprietary practices in which PIREPs weren’t shared to the NAS were all identified as other ongoing issues. 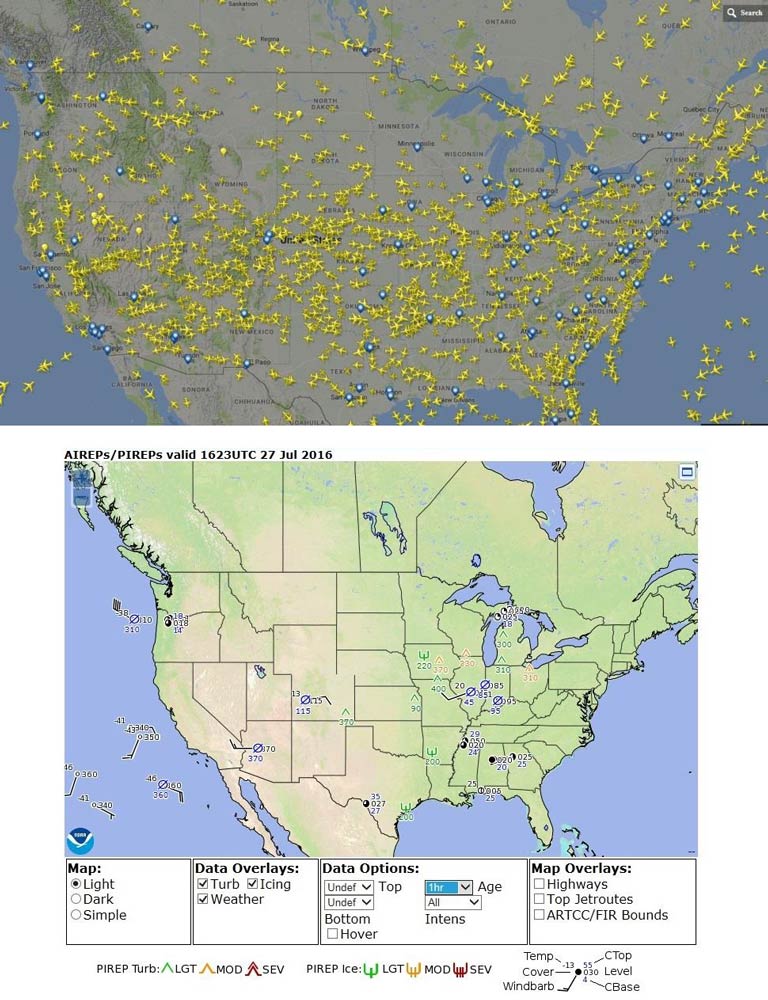 This led to the NTSB hosting a two-day forum on PIREPs last June, in order to open a dialogue on PIREPs among the groups who created and used them. Information gathered from this forum was added to the what they’d found from the accident investigation, and they discovered several opportunities for improving the PIREP system.

In discussing the problem, the NTSB provided an illustration of the problem. The top image, drawn from the FlightRadar24 website, shows the approximate amount of air traffic captured at one moment during a day in June 2016, while the bottom image, pulled from the Aviation Weather Center’s website, shows graphical representations of about two dozen PIREPs submitted during a one-hour period on the same day.

The NTSB’s investigators put forward a number of reasons they believe pilots are making relatively few PIREPs, as illustrated in the image, including:

In addition, they found numerous factors that are also contributing to the challenge air traffic controllers run into when they’re soliciting, collecting, handling, and providing PIREPs, including:

The investigators also pointed out that air cargo operators, who do a majority of flying overnight, could prove to be a massive air to weather forecasters by increasing the frequency and number of PIREPs they submit on a daily basis.

The recommendations include items such as asking the AOPA Air Safety Institute to update their online PIREP course to include scenario-based training that makes use of real-world examples; asking the FAA to review the process by which federal and contract flight service station specialists receive verbal PIREPs, and then simplify the procedures to reduce the amount of time needed to obtain the report from pilots; and asking the Aviation Accreditation Board International, National Association of Flight Instructors, and the Society of Aviation and Flight Educators to emphasize and teach pilots about the importance and utility of PIREPs during initial flight training, recurrent flight training, and flight reviews.

The full NTSB PIREP report can be read by clicking here, and for those interested, you can find the agenda, presentations, and other information from the NTSB June 2016 PIREP forum by clicking here.

It was a beautiful morning in St. George, Utah when I first asked a group of pilots the question: is flying safe (meaning general aviation aircraft)?  The sun was just peeking over the red rock cliffs and was bathing the rows of personal aircraft in golden morning light, and the air was crisp and cool but not cold. My friend John was getting his Cessna 421 fueled up, Jim was doing the same for the Centurion and Peterson was happy to just be “shooting the shit” with some fellow pilots while it all happened. I wasn’t a pilot yet. [Click to read more…]