As a cargo pilot, I do a lot of night flying…

On this night, the winds were out of the north at 12 knots with 3 miles visibility in light drizzle and mist. The first layer of clouds was at 300 feet, with a broken layer at 500 feet and overcast at 1100 feet. On takeoff, it was just an instant of watching the last of the white lights fall away from the nose when I transitioned inside and onto the gauges, or more accurately, eyes onto the “glass”. In about as much time as it took for you to read those words, we had slipped into the inky murk of the low hanging clouds. Other than the thump of the landing gear retracting into the wheel wells and the slight rumble felt with the retracting of the flaps, there was almost no sense of motion. The numbers on my altitude tape continued to get bigger, so that was good, the heading bug was where it was supposed to be, the attitude indicator showed blue on top and brown on the bottom, and the airspeed numbers got bigger and then settled where they belonged at our climb speed. All was right with the world because the instruments say it’s so – at least in my little world anyway.

Once all was confirmed to be behaving properly, I peeked over the instrument panel and was greeted with two greyish white javelins from our landing lights spearing into the layers of broken clouds. I knew that if we kept climbing eventually I’d see the stars. And then like a fish jumping out of the lake, we popped out. The difference, though, is that the fish falls back down to the water, while I fall up into the night sky!

The Greatest Challenge of the Night for a Cargo Pilot

We’re leaving New York’s JFK airport headed to Europe, to the old Hahn Air Base just outside of Frankfurt Germany. Tonight’s flight will be taking us 3359 nautical miles mostly across water and is planned for six hours and twenty three minutes, takeoff to touchdown. Looking at the flight plan, I convert the fuel burn that is listed in kilos first to pounds and then to gallons. It’s my own check as to the madness in the world when I then convert the gallons figure into how much flying I could do in my Piper Cherokee back home. We’ll burn just over 22,500 gallons of jet fuel tonight, converting that to avgas, that’s enough to fly well over two thousand hours in the Cherokee, even if I push it hard, and if I still had the Champ – well, that’s an awful lot of flying!

Taxiing a Boeing 747 at a big, busy airport is probably the greatest challenge of the night. There’s a lot of airplanes moving around, rapid fire instructions from the controllers and many different taxiways with a lot of intersections that allow for plenty of opportunities to mess up. Eventually, we find our way and join the conga line, patiently inching ahead for our turn to takeoff.

Finally, we depart runway 31L with an immediate left turn toward the Canarsie VOR. We’re handed off to departure control and crossing Canarsie, we turn left again and head outbound on the 176-degree radial. We then receive vectors for the climb to keep us out of the arriving traffic flow. The airspace is very busy with JFK, LaGuardia, Newark, and Teterboro all sharing the same neighborhood. We level at our initial altitude of 5000 feet followed shortly with step climbs, being cleared higher just as we approach the next assigned level off. We continue southbound just long enough to begin to wonder when, or if, we’ll start heading toward Europe. We’re then handed off to New York Center, level at 17,000 ft. We get a turn to the northeast with a heading to join our assigned route and we climb to our initial cruise altitude of FL330. We’re handed off to Boston Center and continue northeast bound up the coast of the U.S. We cross into Canada’s airspace, splitting New Brunswick and Nova Scotia, then over Gander on the Island of Newfoundland. We do one last navigation system check to make sure the airplane is where it thinks it is and coast out of Newfoundland, joining our assigned route for the ocean crossing. “Feet wet” to “feet dry” is about 3 hours or so.

A Cargo Pilot has an Unmatched View, Flying at Night

We’re filed for one of the North Atlantic Tracks, NAT track Tango tonight. This routing will take us across the North Atlantic, passing various points in space identified only with Lat/Long coordinates, finding land again over Ireland. Our assigned altitude for tonight is FL340 and we begin our climb to be level before our first fix on the NAT track.

As we start the crossing, the weather offers generally smooth air with an occasional light bump. Not much moon tonight but the sky above is clear with almost unlimited visibility. Dancing in the heavens are brilliant stars and constellations to keep us company as we make our way. I’m always amazed with what goes on in the night sky. It’s funny; Orion seems to follow me wherever I go, and tonight I can see Betelgeuse and Rigel and the stars Alnitak, Alnilam and Mintaka shining brightly on his belt. Way up to the north I can see Cassiopeia. I start humming that old Bobby Vee tune, “The Night Has a Thousand Eyes.” In the song, the chorus trails off with “So remember when you tell those little white lies that the night has a thousand eyes.” How true! The sky is the most honest place I know of on this earth.

There are a just few basic rules to the sky and if you follow them, the sky rewards you with good flying and a long wonder-filled life. Violate those rules and you’re in for much wailing and gnashing of teeth. You can’t fool the sky, and although it will challenge you from time to time, the sky doesn’t lie. For instance, if there is a thunderstorm ahead, it is considered best practice to fly around it, giving it a wide berth, wishing it well and letting it be on its way as you pass by. However, there is nothing to say that you couldn’t play the matador and wave your aeronautical cape at it, taunting it. You may even decide to make like an NFL running back, tuck the ball in close, lower your head and charge straight up the middle. This technique is generally frowned upon though, and you could find yourself transitioning from an airplane pilot into an experimental lawn dart driver in rather quick fashion. If I happen to find a supercell thunder-boomer staring me down, my technique is to take what I see through the front window and, depending upon which way the wind is blowing, put it in one of the side windows and keep it there until I’m well on the other side. Then, with a tip of my hat, I bid the storm farewell, and I continue on my way. Wimpy? Maybe. But, I have danced with many thunderstorms and I am still very much alive, so there!

I assume my late night cruising position, lights down low in the cockpit, forearm resting on top of the instrument panel, chin resting on forearm, face as close to the windshield as I can get without leaving a smudge. I’m struck with an intimidating thought. The only thing between my forehead and a 470 mile per hour -54C breeze is about one and a half inches of glass. I slide my chin back just a little and whisper a word of thanks to the Boeing engineer who designed the windshield, hoping he had a good math day while he was doing his figuring. Mind drifting back to the sky, every once in a while, a shooting star. I look to the heavens and thank the maker of all this. I can’t explain it, it is a mystery to me, and in awesome wonder I sit back and enjoy its magnificent beauty, and I am very thankful!

As we cross 30 degrees west longitude, which is generally considered the middle of nowhere, I can’t help but think about how Charles Lindbergh found himself out over this same ocean, flying much lower, battling all the North Atlantic had to throw at him, on one engine, and all alone. With that thought, I excuse myself from the flight deck, walk back to the galley, have a stretch and fix myself a nice hot cup of coffee. Heading back to the cockpit I pass the lav, again my thoughts are with Charles Lindbergh, thirty-three and a half hours without a galley for coffee or a bathroom, that poor guy! I silently thank all those who have gone before me, advancing aviation to the point where I find myself tonight, nested in a reasonably comfortable, multi-positioned, electronically operated, high back chair with adjustable arm rests inside a pressurized cabin environmentally controlled with heating and air conditioning that’s adjustable to my liking, a coffee pot, a bathroom, and four engines. Life is good for a cargo pilot!

Coasting in over Ireland, we pass just north of Shannon and then pass a little south of Dublin. We cross England, flying over London and then across the English Channel.

Crossing the channel, my thoughts move to the many WWII 8th Air Force bomber crews who crossed here, many never to return. I can almost feel the energy in the air, the British night raids followed by the U.S. day raids, airplanes everywhere, fighters twisting, turning, fighting and some falling. Their cargo, bombs to stop oppression and to keep the world free. My cargo… well, just cargo. Cargo of who knows what for who knows whom to be delivered to who knows where….

We begin our descent over Brussels, into the dawn of a new day beginning. 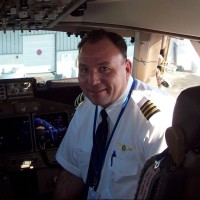 Matt Ferrari
View More Posts
Matt Ferrari is an aviation enthusiast who, while learning to fly in small planes, wanted nothing more than to fly big planes. Now that he flies big planes, he can’t wait to get home to fly small planes. He is currently flying the world in a Boeing 747-400 for work and flying his Piper Cherokee 180 for fun.