The dream of flying is as old as humankind itself. Throughout our history, we have struggled to achieve flight. And it wasn’t until fairly recently in our history that we achieved the first flight. We started with balloons, followed with gliders, and eventually developed powered aircraft. The story of this achievement is a fascinating one, with many players such as the Wright Brothers being well established. However, their historic first flight at Kitty Hawk in 1903 may not have actually been the first powered flight. In this three part series, Disciples of Flight is going to look at the question of who achieved the first flight with a powered aircraft. In part one, First Flight: The Early Aviators, we will look at the development of flight leading up to the Wright Brothers. Part two, First Flight: the Wright Brothers, will give a brief history of the brothers, and cover their first flight. And part three, First Flight: Gustave Whitehead, will cover the bold claims of Gustave Whitehead, and others, to first flight.

The Dawn of Aviation and Dream of First Flight

Human study of aviation began with the study of birds – the Earth’s true natural aviators. Ancient times are littered with stories of people who built wings that strapped to their arms and attempted to take flight. And much like the myth of Icarus, most of these attempts at first flight ended in tragedy. The trouble was that birds were designed for flight, with wings, feathers, light bodies, and hollow bones. They were made to soar through the air. But for heavy, clumsy humans, taking to the air was not going to be an easy accomplishment.

The study of aircraft began around 500 BC, with the ancient Chinese and Japanese civilizations both developing and using kites. This represented mankind’s first flight. And though this first flight was unmanned, it still served as a very important step in the design and testing of later aircraft. A couple hundred years later, the Chinese developed the world’s first hot air balloons, called Sky Lanterns. Their invention is generally credited to military strategist Zhuge Liang, who used a sky lantern to deliver a message requesting reinforcements during a battle in which he was surrounded.

In the centuries that followed, men continued testing various aircraft, gliders and yes, wings attached to their bodies, in the quest for manned first flight. Many of these original aviation pioneers clearly did not subscribe to the popular jest, “If God wanted me to fly he would have given me wings.” Finally, in the 15th century, things started to really get serious with scientist and researcher Leonardo Da Vinci.

Da Vinci designed many flying machines, powered by a variety different methods. One of his most notable was called an ornithopter, a machine that worked by flapping wings (apparently, we really wanted to fly by flapping wings). In the 17th century, Isaac Newton and other scientists and researchers began exploring aerodynamics and the physics of flight.

We just knew flight was possible and continued to work at it, deciding it was only going to be a matter of time until we could make a manned first flight.

The Montgolfier Brothers Achieve First Flight in a Balloon

Finally, in 1783, the Mongolfier Brothers made that first flight. Beginning in 1777, Joseph and Jacques began experimenting with hot air. Joseph had observed laundry drying over a fire, and how it created pockets in the fabric that billowed upward. Convinced that smoke contained a special, buoyant gas he dubbed ‘Montgolfier Gas‘ (because hey, why not?), he built a box like structure out of wood. It was roughly 3 feet x 3 feet x 4 feet (1 m x 1 m x 1.3 m), and he covered the frame with lightweight taffeta cloth. He lit a fire under the bottom of the box, and it lifted off its stand,and rose to the ceiling.

Joseph contacted his brother, Jacques, writing “Get in a supply of taffeta and of cordage, quickly, and you will see one of the most astonishing sights in the world.” Together, the brothers constructed a similar box, roughly 3 times larger. They were so surprised and unprepared for the lifting power of this box that they lost control of it during their first test. It floated some 1.2 miles (2 km) before crashing to the Earth. The brothers decided the next step was a public demonstration, so they could establish a claim on this new invention. 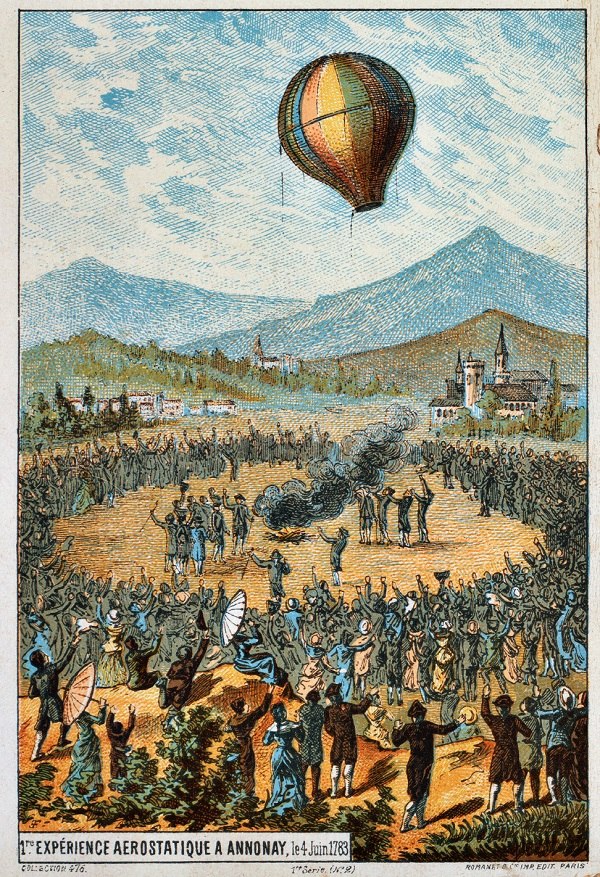 Word of this flight spread quickly, and the Montgolfier Brothers decided to build an even larger balloon. Working with wallpaper manufacturer Jean-Baptiste Réveillon, this new balloon had a 37,500 cubic foot (1060 cubic meter) interior,and was covered with taffeta varnished in alum, which had fireproofing qualities. King Louis XVI of France suggested this demonstration be manned, and offered up a pair of criminals for the uncertain job. The Montgolfier Brothers declined, instead deciding to send up a sheep, duck, and rooster. The flight took place before a crowd at the royal palace in Versailles (including the King and Queen) and was a great success. The balloon flew for approximately 8 minutes, covering 2 miles (3.2 km) at an altitude of about 1,500 feet (460 m). The balloon landed safely, delivering a trio of unharmed but likely thoroughly confused and terrified animal passengers back to Earth.

The success of this demonstration led to a third balloon being built, with a 60,000 cubic foot (1,700 cubic meter) capacity. The balloon was roughly 75 feet (22.9 m) tall and 50 feet (15.2 m) in diameter. On 15 October 1783, Jacques went up in the balloon, achieving manned first flight. This was followed by many additional flights and tests, including the first female aeronaut, Elisabeth Thible, in 1784.

Over the years, ballooning evolved to include the use of hydrogen gas (though not always with the best results), and despite never becoming a primary, sustained means of air transportation, it has earned it place in history, and still enjoys recreational pursuit.

First Flight with a Glider

Next came George Cayley in 1799. This prolific British engineer, who is hailed as “The Father of the Aeroplane”, is widely considered one of the most influential people in the field of aviation. He seems to have been the first to really grasp the underlying aerodynamic principles of flight. He was the first to identify the four forces of drag, weight, lift, and thrust, and gained great acclaim with his landmark three-part treatise “On Aerial Navigation.”

In 1804, Cayley designed the first model glider with the layout of a more modern aircraft. His glider had a fixed main wing and movable tail surfaces. The aerodynamic concept he set forth here was that the aircraft must have a fixed wing for gliding and direction, and a separate system for propulsion, control, and lift. In 1853, he was able to build a full sized glider that successfully carried his footman across Brompton Dale. This was the first flight in history with a manned glider.

Felix du Temple followed in 1874. A French Naval Officer, du Temple built the first Monoplane made of aluminum. This plane had a wingspan of 42 feet (13 meters) and had an empty weight of 176 pounds (80 kg). There are many people that credit du Temple with the first powered, manned flight. His steam-powered monoplane, after running down a ramp, sputtered through the air for a few brief moments before returning to Earth. Certainly not as impressive as later flights, but this predated the Wright Brothers by some 27 years.

Du Temple was followed by another French engineer and inventor, Clement Ader. Ader created a flying machine he dubbed ‘Éole‘. This bat-inspired design was powered by a lightweight steam engine of Ader’s making. The 4 cylinder engine, weighing roughly 140 pounds, produced about 20 hp and drove a four blade propeller. The Éole had a wingpsan of 46 feet (14 m), and a weight of 650 pounds (300 kg). On 9 October 1890, Ader made an attempt to fly Éole, and it’s accepted that the aircraft took off, reached a height of roughly 8 inches (20 cm) and flew uncontrolled for about 160 feet (50 m). This flight predated the Wright Brothers by 13 years.

In 1893, German aviation pioneer Otto Lilienthal, later dubbed the Glider King, made hundreds of successful glider flights, gliding distances of up to 820 feet (250 m). What Lilienthal achieved that all the inventors and gliders before him couldn’t was consistency. He could repeat his flights over and over again. This fact gave him a kind of viability and credibility in the young but rapidly growing science of aeronautics. Tragically, Lilienthal died in 1896, after his glider stalled and he was unable to regain control. Falling from a height of about 50 feet (15 m), he broke his neck. His legacy, however, was strong, and the Wright Brothers cited his work as a primary influence on their decision to pursue aviation.

There was also the US astronomer and aviator Samuel P Langley. After successfully flying many Aerodrome models, he built a full-sized, steam powered one with a 50 hp engine 1893. Sadly, on both attempted flights, the Aerodrome was damaged during launch, and Langley never achieved successful flight.

Around the turn of the century, a new host of players enters the scene, and things start to get a little muddled. There are, of course, Orville and Wilbur Wright. There are also the controversial and hard-to-ignore claims of Gustave Whitehead, and a pair of lesser-known aviators to consider: Karl Jatho, and Richard Pearse. These other men, it seems, may have as much claim to the first powered flight as the Wright Brothers. But wait, you might say, what about du Temple and Ader? Didn’t they beat everybody?

Well, yes. But according to aviation historian Charles Harvard Gibbs-Smith, the Wrights still deserve the credit. He writes that “a barn door can be made to ‘fly’ for a short distance if enough energy is applied to it” and dismisses Ader, du Temple and others as having achieved ‘powered hops’, and not sustainable, controllable, repeatable flight, as the Wright Brothers did.