Aviation and aerospace giant Boeing isn’t just spending their time building and researching new aircraft. They’re also interested in developing new ways to fight fires. And thanks to a report from the Seattle Times, we have a chance to look at a new artillery fire fighting system Boeing just patented.

The patent, which features seven Boeing employees as inventors, shares information detailing why they think the artillery approach would be more efficient at delivering fire retardant chemicals than the traditional use of airplanes and helicopters. There’s no indication Boeing has done any testing on the idea yet, as a working prototype isn’t a requirement for securing a patent.

Why Shift Away From Fighting Fires With Aircraft?

Currently, airplanes and helicopters are employed to drop fire-retardant material on or in front of advancing fires, but according to the patent “such aircraft deliver fire-retarding materials at a low rate which often makes them inadequate to control forest fires.” As an example, the patent states that “in order to establish an aircraft-delivered firebreak for a relatively small 28-acre fire, it would take approximately 7.6 hours to deliver a required 6,469 gallons of fire-retarding material.” It goes on to say that during that time period, that relatively small fire has the potential to grown and burn roughly 100 acres of land. The patent claims it gets worse when combatting larger fires.

The patent also points to several other shortcomings of aircraft-delivered firebreaks, such as the inability of the aircraft to deliver payloads at night, and that the accuracy of payload delivery can be diminished due to wind, rain, and / or smoke. In the words of the patent, “An improved system and method is needed to fight forest and other types of fires.”

Why Artillery, and How Would it Work?

On a basic level, the artillery fire fighting system would work by firing an artillery shell packed with fire-retardant material towards a fire, and then (non-explosively) triggering the shells, based on a pre-determined condition, to release 1 to 6 gallons material over an area of 100 square feet. Using the right gun, the patent says that the shells could be delivered from over 15 miles away, and be accurate to within 15 feet. 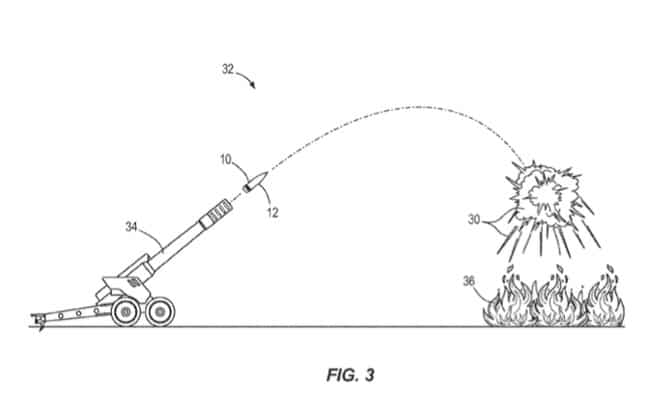 The patent also states that with artillery, the retardant could be delivered in different patterns suited to different situations, such as “a concentration barrage, a creeping barrage, rolling barrage, or a block barrage,” and that the retardant could be “delivered continuously or intermittently for long durations, regardless of darkness, weather conditions, or intensity of the fire with reduced risk to those fighting the fire.”

So, what’s the right gun for the job? Well, the patent offers up four different howitzers (a designation of artillery gun):

Additional Details of Interest From the Patent

In the patent, they specify that the shells would be made from material that degrades in a timeframe of anywhere from 1 month to 10 years, “but at no time before, during or after its degradation shall it be toxic to the environment.”

Finally, Boeing includes spreadsheets that demonstrate the superior nature of the artillery fire fighting system when compared to aircraft, though they do refer to them as “simulation results.” Again, using a 28-acre fire as an example, they say it would take aircraft delivering 6,469 gallons of retardant over 7.6 hours to contain it, during which time it would burn an estimated 100 acres. By comparison, the artillery system delivering 3-gallon shells would use only 4,990 gallons of retardant over a 2.6 hour period, and limit the area burned to 39 acres.

Response to the Idea of Fighting Fire With Artillery

It’s definitely an intriguing idea, but not everyone is sold on it. According to the Seattle Times report, Tim Ingalsbee, the Executive Director of Firefighters United for Safety, Ethics, and Ecology, a group advocating progressive approaches to managing wildfires, questions whether the artillery would really be able to provide the unbroken coverage necessary to keep fires contained.

“It sounds ridiculous because it’s a matter of scale — how many rounds do they have to pound out to lay out a good retardant line?” Ingalsbee questioned. He also adds that while it’s true aircraft are often grounded by extreme conditions and smoke, when they are able to fly, they can drop retardant in remote areas and steep canyons, something that might present some difficulty for artillery when its being positioned for a shot.

Randy Eardley, the Chief of External Affairs with the BLM’s National Fire and Aviation program expressed interest, but with caveats. “Wildland fire agencies are always interested in exploring new technologies that have the potential to enhance the effectiveness and efficiency of wildland fire management and wildfire suppression. However, there are rigorous processes in place to test new technologies to determine whether it is feasible and appropriate to incorporate them or not.” He added that until such time that a product is fully tested, the BML can’t speculate on their potential uses.

Regarding the testing, Boeing spokesman Brett Jensen said in an email to the Seattle Times that Boeing gets hundreds of patents annually, and just because they are awarded a patent, it doesn’t mean they’re actively developing that concept or design in the near future.

For anyone interested in reading through the 14-page patent for Boeing’s artillery fire fighting system, you can find a copy at this link here.