Flying to Volos Airport and Pelion, the Mountain of the Centaurs, can be an incredible experience for private pilots.

It seems that ancient Greek mythology has always had a wide fan base. Maybe it is because Greek Gods came with very human behavior. They had weaknesses and passions; they were protectors of particular trades; they would change the path of history; socialize with fairies, minor gods, demi-gods, etc; and obviously, they were all immortal. One such group of immortals were the Centaurs. They were half man (from the waist up) and half horse, and their origin was Mount Pelion in Thessaly… and this is a good excuse for any pilot to fly over to Volos Airport, and have a look. 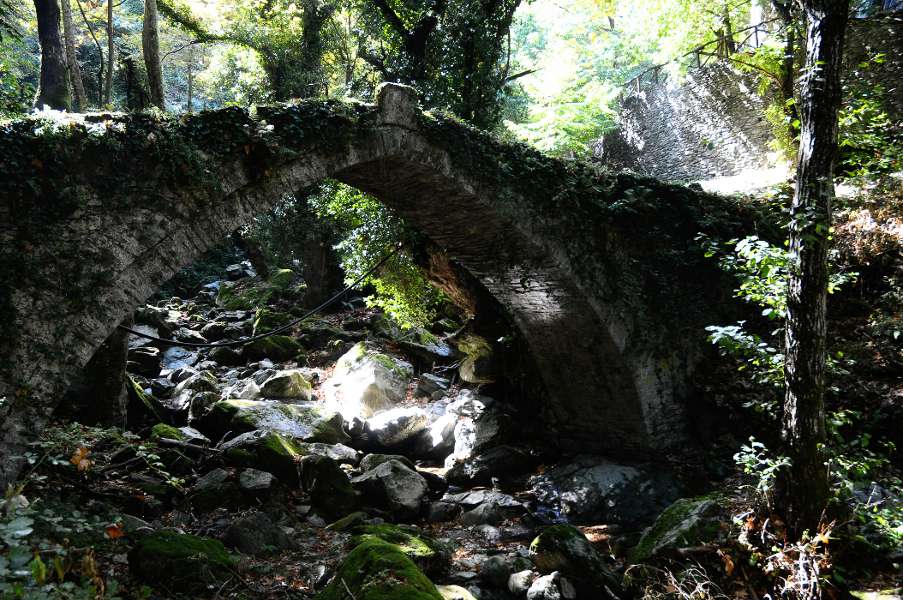 The first thing you need to do is to get out of Athens, ASAP! When I have discussions with foreigners about Athens, they all exalt the Acropolis hill and the surrounding area and forget that Athens is a 412 km2 (159 sq mi) large, 5 million strong metropolis, of which you eventually become tired and need a break.

Passing the gate at Tatoi AFB (LGTT), I’m switching off my mobile phone, which is a great relief. It’s time to leave everything behind and start making calculations. 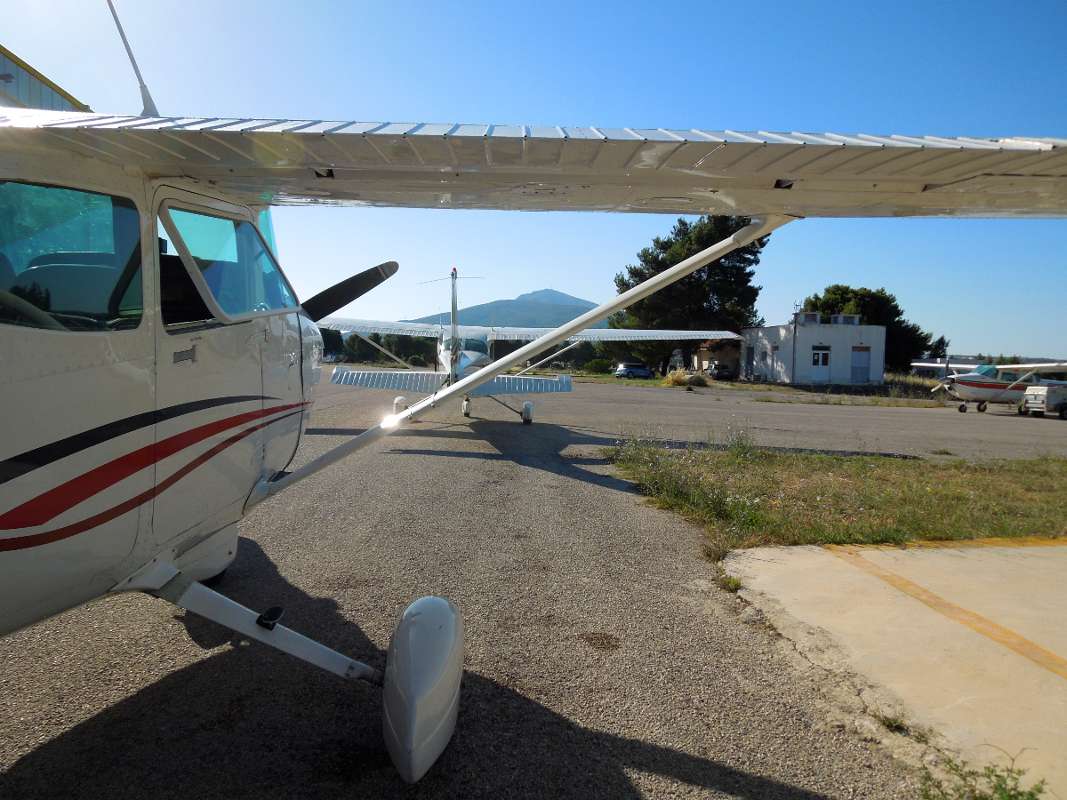 (On the ground at Tatoi AFB)

This time round, the Cessna will be carrying 4 male Greeks, 20kg (44lbs) of gear and the typical full (40gal) load of fuel. Hmmm…this does not look good on the performance charts, especially with an OAT at 30°C (86°F). On second thought, we do not really need all this gear now, do we? Fotis, a good friend, and a very experienced pilot told me the other day that “the definition of a Cessna is the plane you fill up with people and baggage until you need to push the doors to shut and it still flies,” but I’m not willing to take any chances. A camera and a bottle of water will suffice.
I must say, just adding two more people makes the C-172 feel heavy, even on the ground. RWY03 is in use, which is good news and bad news. Good news because it is already pointing where we’re going (so no need to follow the pattern before turning north) and bad news it is the uphill one and it already feels like the air is getting somewhat hotter…or is it just me?

Upon receiving the clearance for take-off, the throttle is thrust in gently from 1,000 rpm (and not idle, always trying to keep the engine soot-free) to full-throttle. Result? Not a great deal of acceleration taking place. At least Tatoi is generous in terms of runway length. This reminds me of my days as a new driver, flooring the accelerator pedal on my mum’s 1969 VW Beetle (that’s all my parents were willing to trust me with back then). That 1.2 lt engine at 34-36 bhp produced the same amount of “whoomp” as the D2J now. The movement of the IAS needle comes in as a pleasant surprise and by this point we are really getting going…45, 50…come oooonnn!…55, 60…you can really feel the pressure on the controls now…nose picking up…and we’re airborne and climbing at 70 kts.

Pilots who have done a few circuits around Tatoi know that there is a short and narrow dirt-road (unpaved if you prefer) right in the middle of the forest that starts half a mile down the end of 03. This road is supposedly the best option for an emergency landing after take-off. Under these conditions, with the Cessna desperately trying to overcome the forces of physics, my only hope would be to live to tell. However, the instruments are all green, we are gradually picking up altitude and slowly move on to Marathon lake, an artificial reservoir that provides the city of Athens with fresh water, located just 7 nm west of the Marathon battlefield (no, Marathon was not a sports event…well, definitely not for the invading Persians). 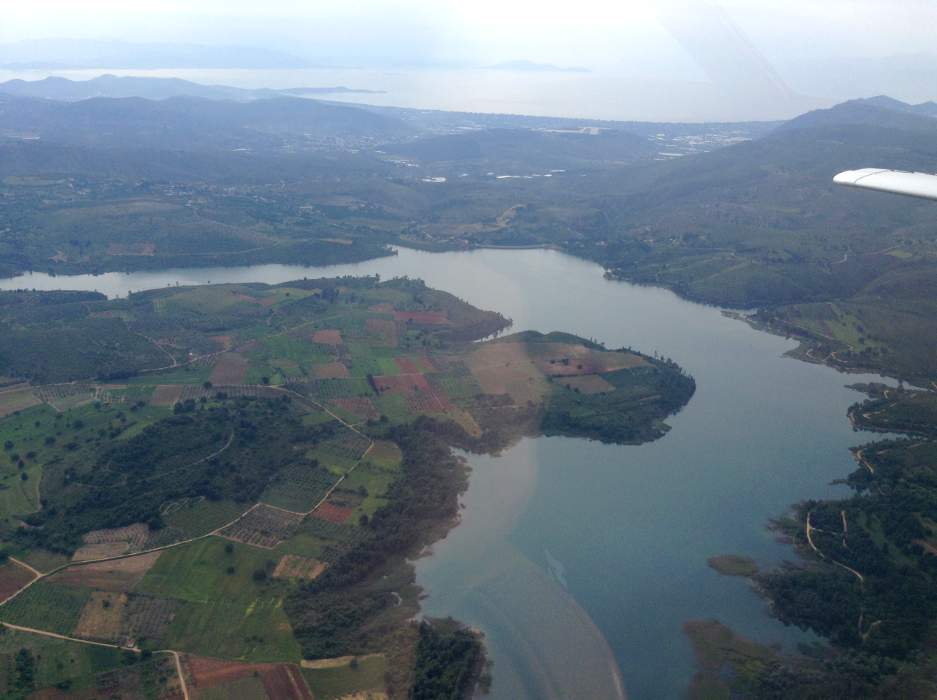 (Marathon Lake, with the battlefield of Marathon visible in the far background, next to the beaches.)

This brings us also to the border of Tatoi controlled airspace and we switch our radio over to Tanagra tower. These Hellenic Air Force controllers are always friendly and highly professional (like all controllers), but for some reason, you feel extra-safe. Regardless of whether it is a man or a woman, you hear a calm, steady voice, capable of routinely dealing with all eventualities. Of course, Tanagra is also home to the HAF 114 Fighter Wing and “nest” of our Mirage 2000/2000-5. Air superiority is the name of their game, as many NATO pilots will tell you from their encounter with their Greek counterparts during Tactical Leadership Programs.

We are already 10 minutes in the air and are now reaching the cruising altitude of 3,500 ft. Trimming the elevator for zero VSI gives us a high angle of attack, in order to produce enough lift. At least high for what I’m used to. It just feels weird, especially looking at the guys in the rear seats, who seem to be sitting 1-2 inches lower than normal.

On a 309° heading, we are already flying over Evoikos Gulf (the sea between the Greek mainland and the island of Evia), approaching the city of Halkida (or Halkis), named after the daughter of Asopos according to the mythology, but more likely due to the involvement of the ancient inhabitants with mining copper (halkos). On the left-hand side there are shipyards and a cement factory. 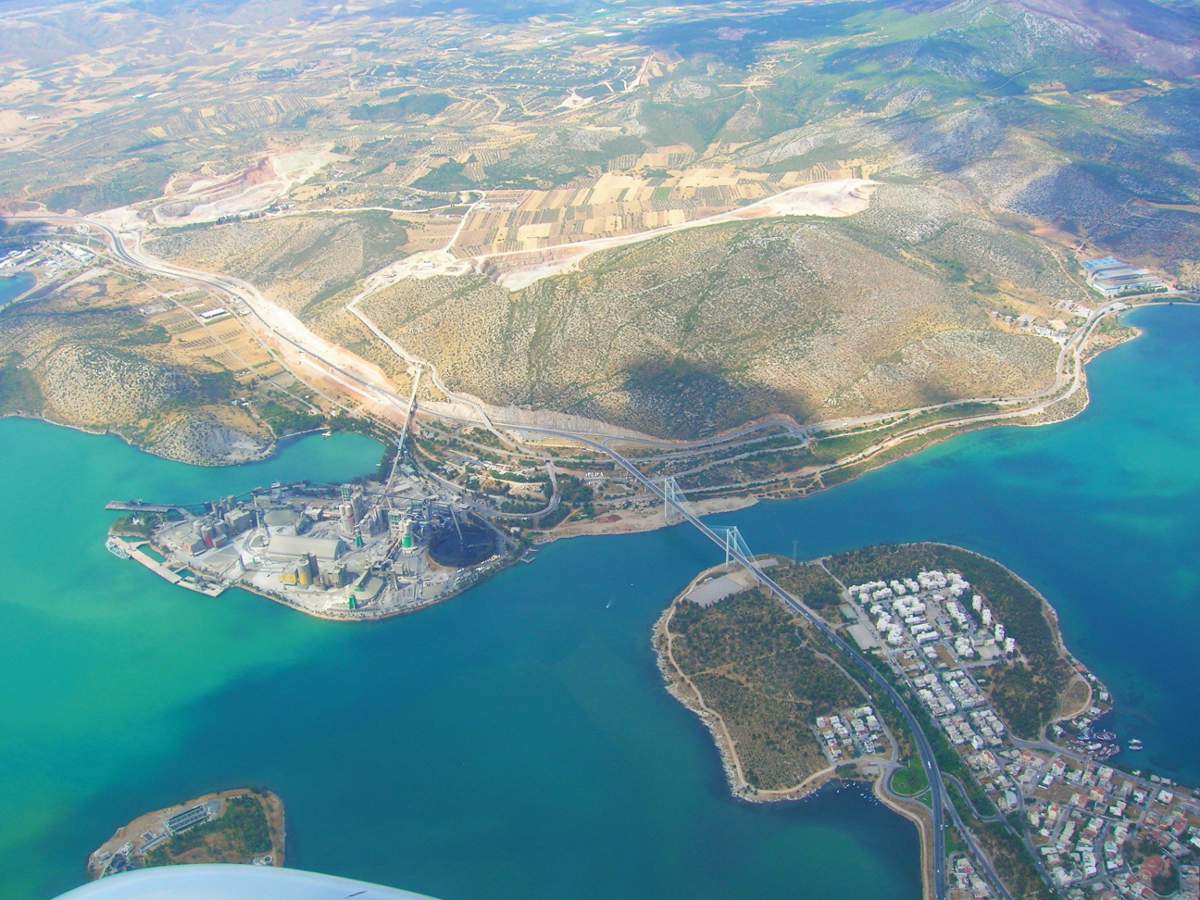 They are nothing nice to look at (unless you are the “arty” type), but they are very characteristic landmarks and helpful for navigation. Halkida is also known for the tide of the sea, which was first recorded in the ancient times.

Passing Halkida, our next waypoint is Loutra (Baths) Edipsou (LOUTRA AIDHIPSOU on aviation charts). To get there, you need to keep 312° on your HSI for 35 nm. To your west you can see Lake Yliki, another (remote) Athens water reservoir. 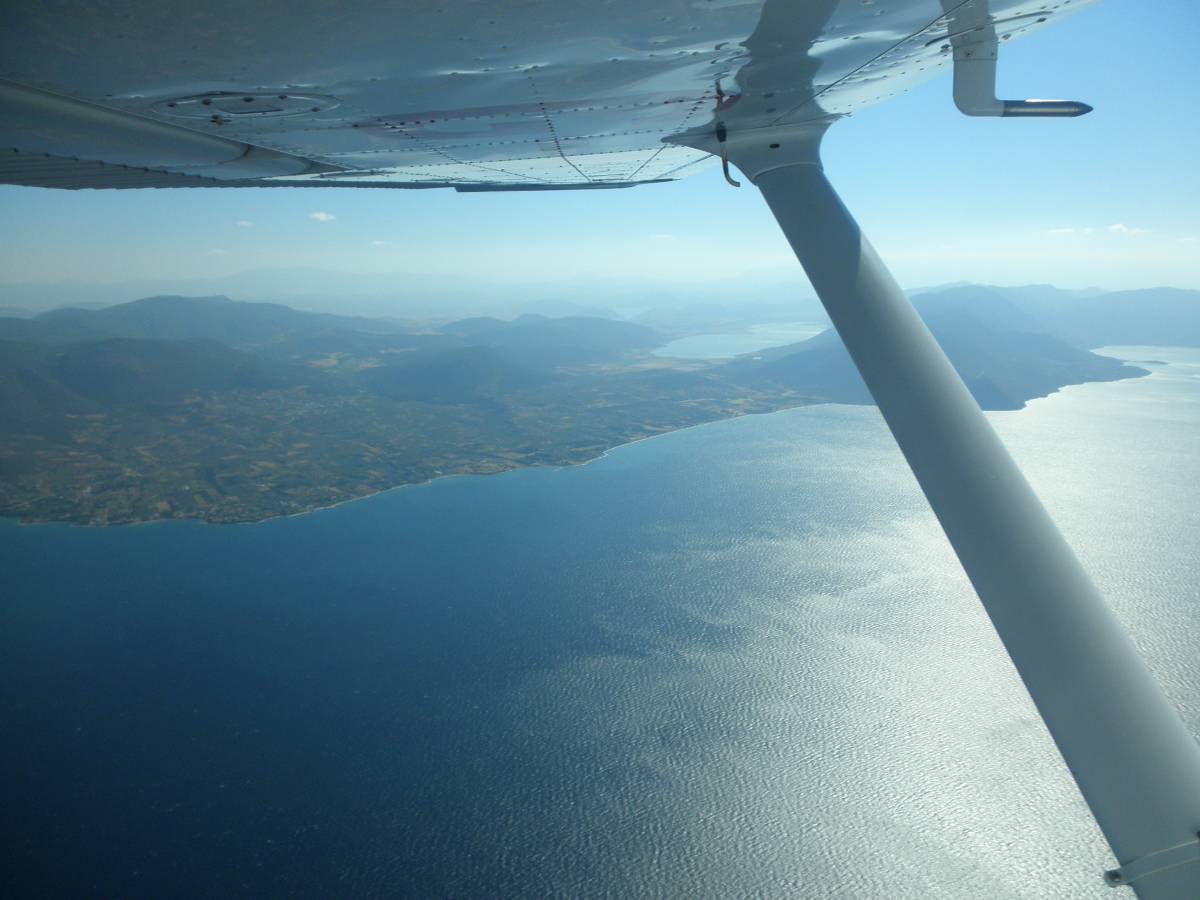 (The Greek mainland to the left and Lake Yliki.)

To your east, you admire the west coast of Evia. 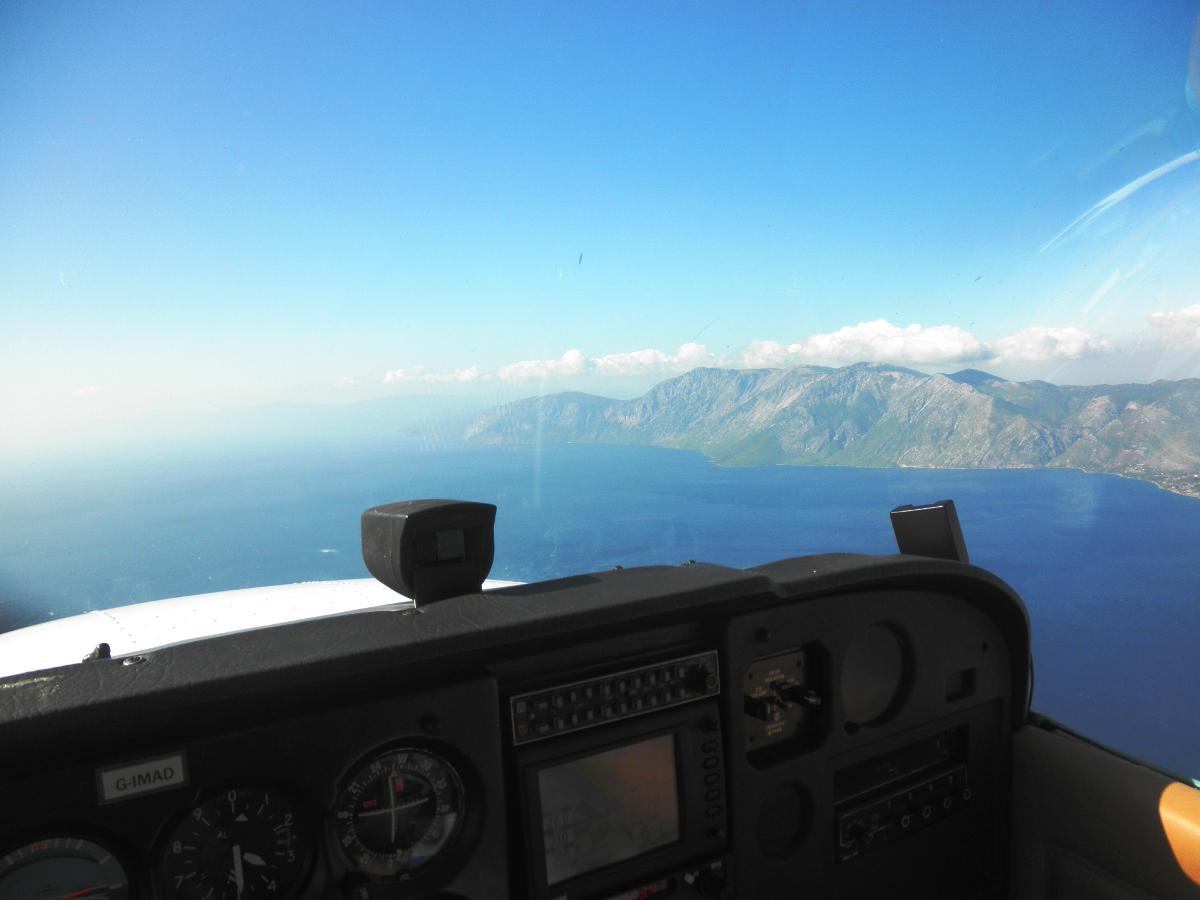 (The island of Evia to the right and Mount Kantili.)

Passing Mount Kantili (meaning vigil light…don’t ask!) you find yourself flying over a twisty road, which accurately follows the coastline and passes through the sea-towns of Limni (nice fish taverns) and Rovies (old olive trees, nice guesthouses), to finally reach Edipsos, which is known for the iconic Thermae Sylla Spa, built in 1896 on the source of warm water pouring out from the depths of the earth. 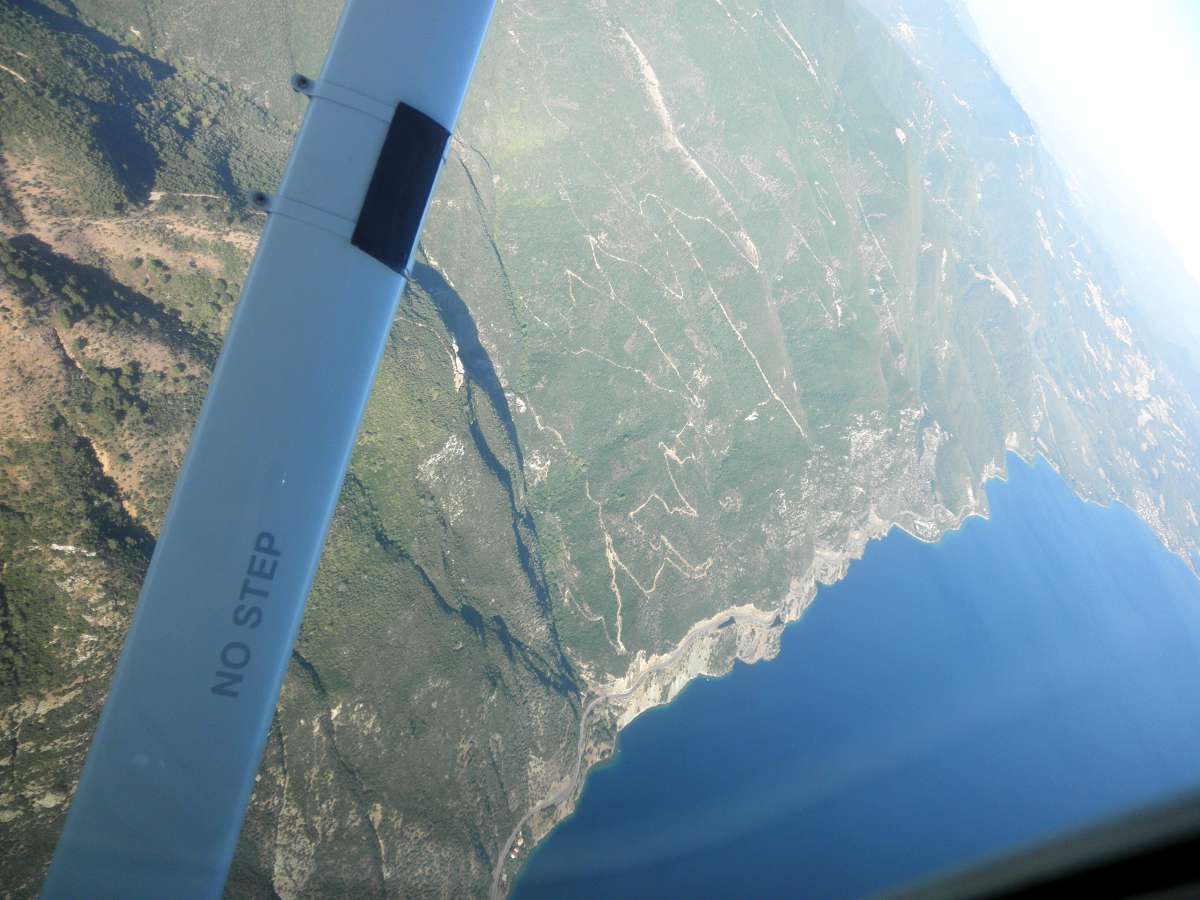 (The twisty road from Limni to Loutra Edipsou.)

This is literally on the coast and you can just lay on one of those rocks on the beach, your legs floating in cool sea-water and the rest of your body under a constant stream of warm water that ends up in the sea. It really is quite unique and more pleasurable in the spring or autumn, because of the temperature difference. What I have always found fascinating is that on exactly the same latitude, 28nm to the west, there is another group of warm water spa sources called Thermopylae, meaning “Hot Gates.” Historians will tell you it is a location of monumental importance for the western civilization.

It is time to turn right for 005° and enjoy the splendid view of Pagasitikos Gulf. I think this is one of the most interesting features of the Greek landscape. Had it not been for half a mile of land, the eastern tip of the gulf would have been an island. Had it not been for 3 miles of water, the gulf would have been a lake, with a surface about 6-7 times that of the largest natural lake in Greece. The coastline is complicated and if that wasn’t enough, there are tons of little islets for extra confusion. Most of the time you complain for lack of reference points, now there’s just too many! On our heading, we will find Trikeri, a small village on top of a hill, 1 nm from the sea, in almost all directions. It is not coincidental that there is a chapel of Saint Nikolaos, protector of the seamen, in the village. 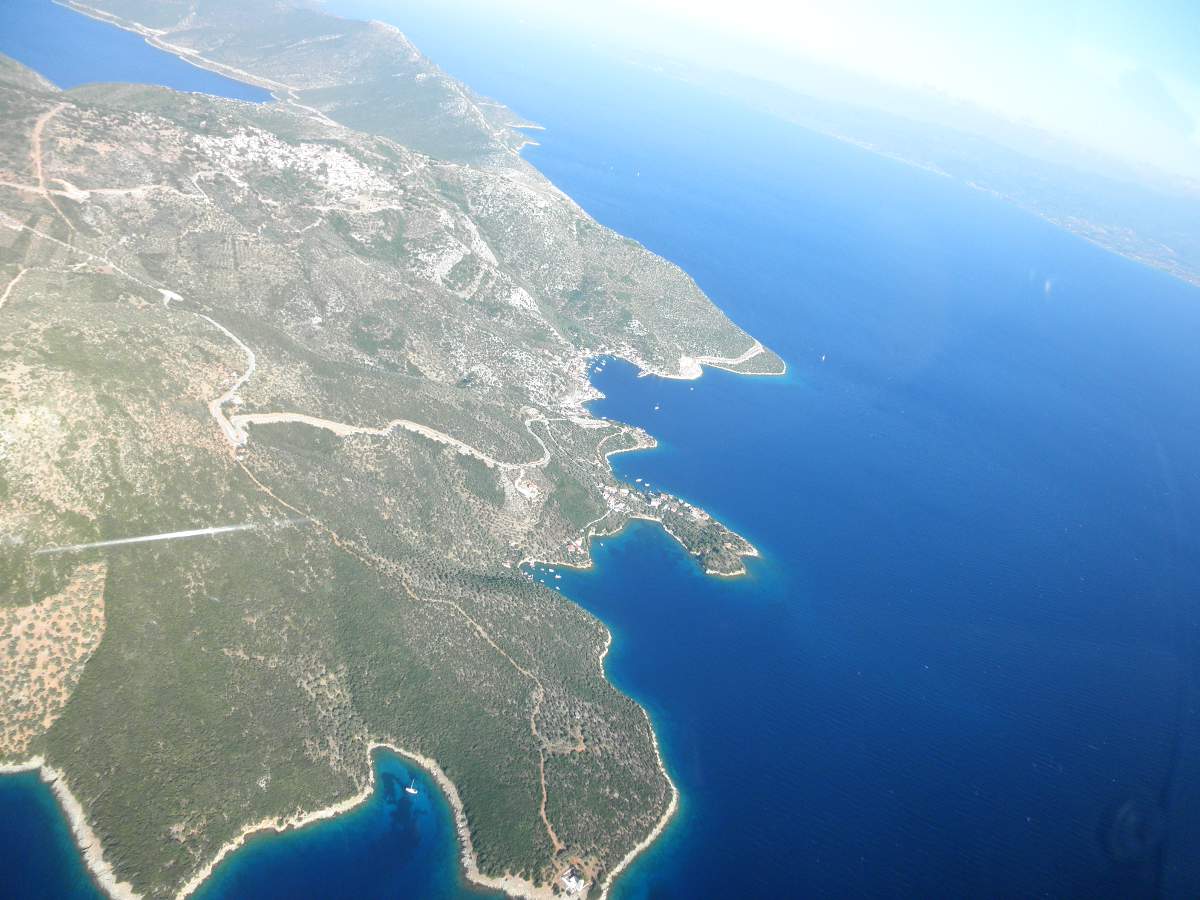 (Trikeri is the village on top of the hill on the top left corner.)

From this point, you can just follow the coastline of the eastern “hook-like” leg of the gulf. In this anti-clockwise route, you will have in view the splendor of Mount Pelion. During spring or summer, everything is green and the contrast with the blue Aegean water is fascinating. During winter, Pelion is often covered in snow and you can check the wind by looking at the smoke coming out of the chimneys of old stone houses. Maybe too often, this smoke is the result of fat dripping off homemade spicy sausages and juicy steaks on red-hot fir tree charcoal. The peak of Mount Pelion is at 5,329 ft and 3 nm to its east lays Zagora, one of the most scenic villages, not only of Mount Pelion but Greece itself, which is our last VFR point before we land. 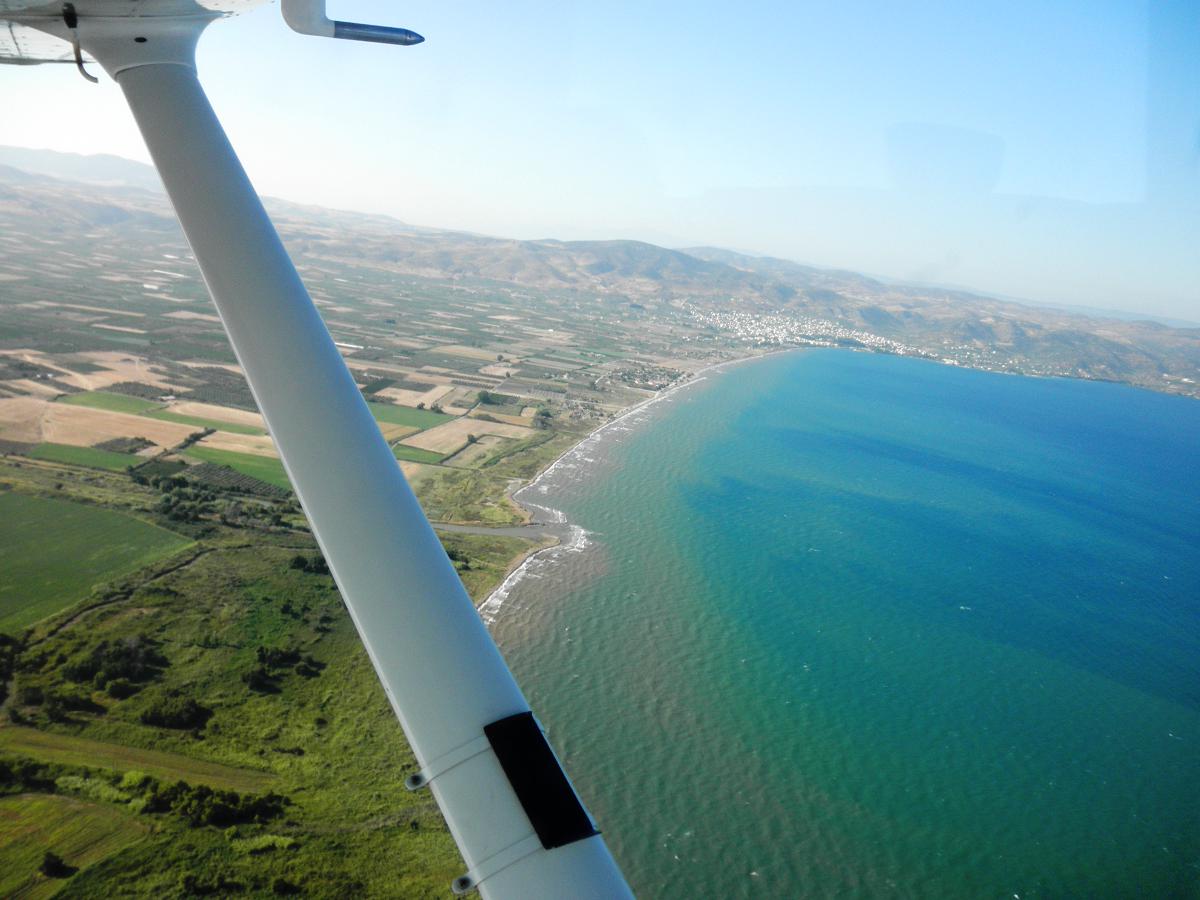 (In the pattern around LGBL.)

Turning south on a 185° course, you can see the city of Volos to your right (west) and as you approach the tiny islet of Pythou, you are already 12 nm east of the Volos Airport (LGBL), located in the fields between the towns of Nea Anchialos and Almyros. Nea Anchialos AFB is also where 111 Fighter Wing resides and has been for years the only home of the HAF F-16 Fighting Falcons (before new Blocks equipped squadrons throughout Greece). It always feels quite special to land on RWY26, looking out towards the military apron where the Falcons are parked, always ready to defend the Greek skies.

The Volos airport has new facilities, a new terminal and there are about a dozen international flights to LGBL. After landing and sorting out the paperwork at the airport, we get out, rent a car and start driving up the mountain, to relax and enjoy the view from a different angle. Tonight we are staying at the village of St. George, location of Arhontiko Ioannidi, a mansion built in 1888 by a wealthy trader upon his return home from Egypt. After its restoration, it is now one of those places you cannot forget. You walk in and you enter a 130-year old time capsule. You wake up and admire the ceiling decorations, thinking of all the hard work those ex-pat Egyptian artisans had put in to keep Ioannidis (their patron) happy. There is a legend of a hidden treasure in the surrounding garden and it is not the only myth in the area. 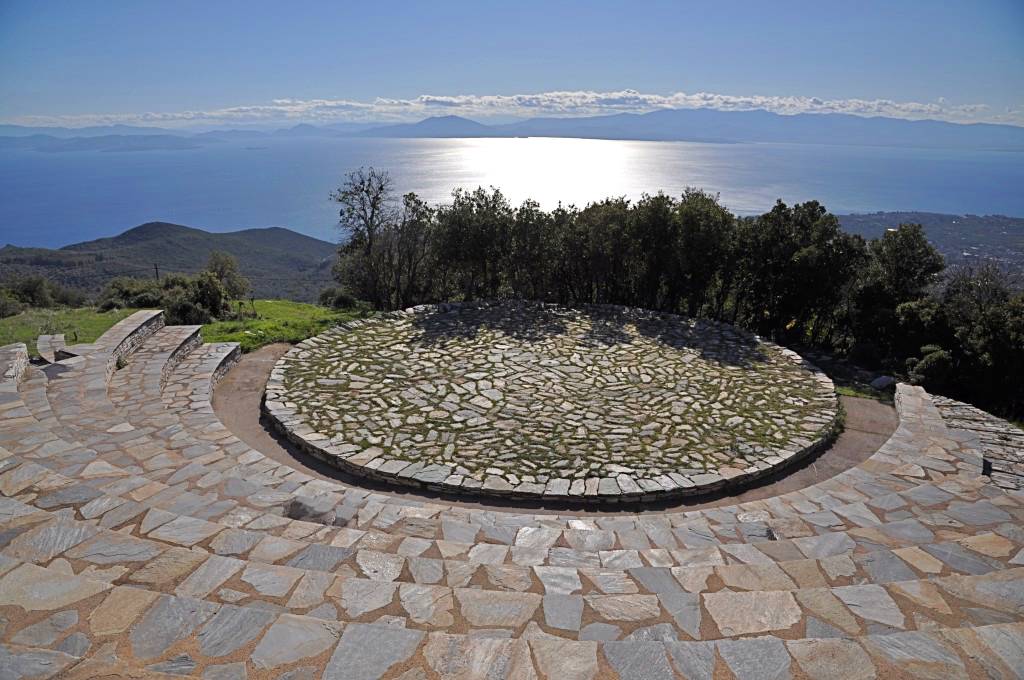 (You don’t have to fly to get a great view from St. George.)

As we head out to St. George, we see a sign to the village of Iolcos, home of Jason of the Argonauts. Jason, like Ioannidis and so many ambitious Greeks of the past and present, left home in search of the “Golden Fleece,” or in other words, a better life. With images of Pelion “ex altis” still fresh in my mind, with a blazing sun making everything shine bright and the moist flora of the slopes turning the air crisp and fragrant, I can’t help feeling “the gold” has been here all along.

Map of the Flight Route from Tatoi AFB to Volos Airport