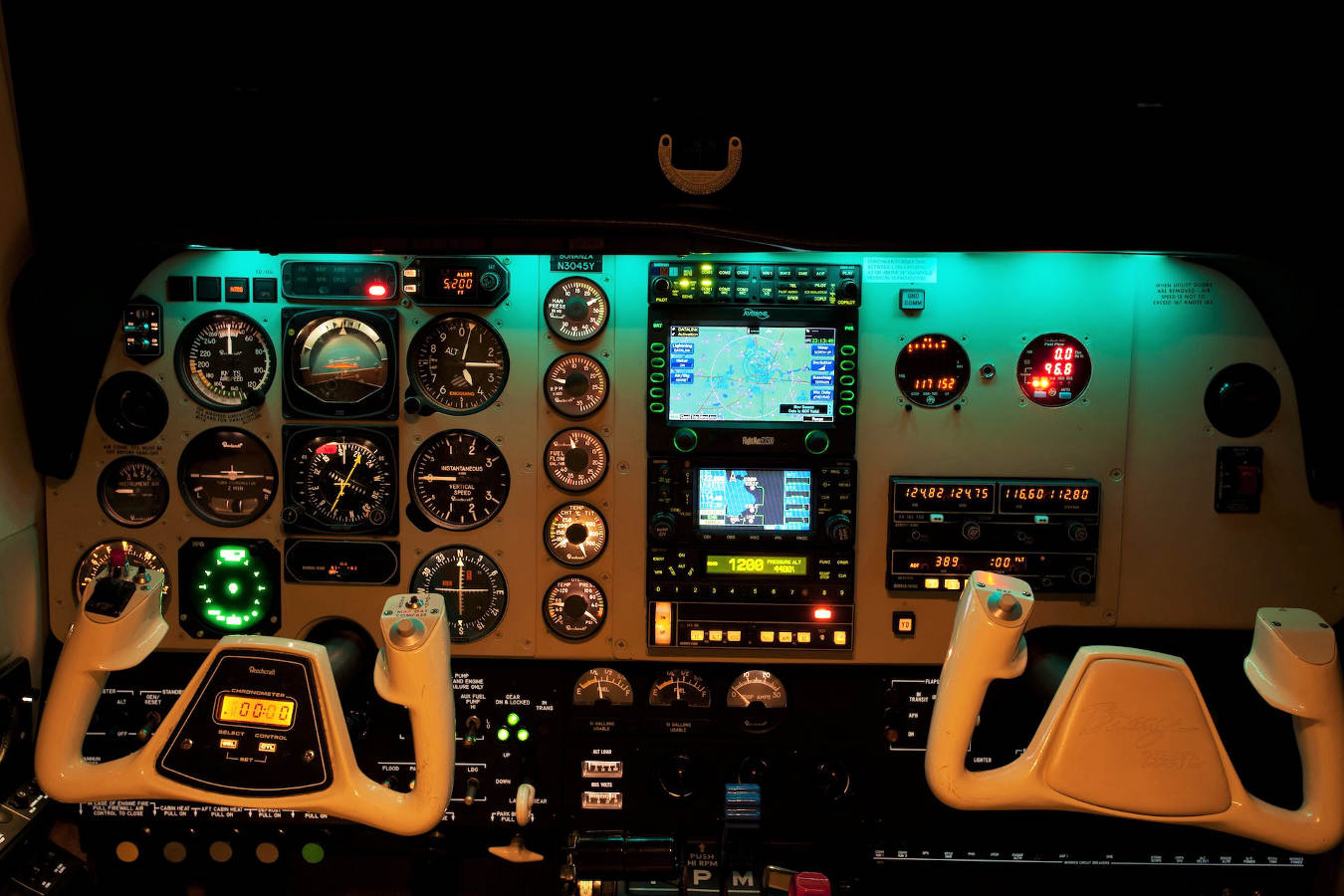 Northrop estimates that more than 72,000 USAF pilots have trained in the Northrop T-38 Talon since its inception

You may recognize it from its resemblance to the fictional MiG-28 from Top Gun, or maybe you’ve seen pictures & video of astronauts zooming around in it to train for their space missions. It’s also the fighter trainer for the U.S. Air Force, and this is where I had my introduction to the Northrop T-38 Talon just prior to starting my training in the F-15E.

History of the Northrop T-38 Talon

The T-38 was introduced in 1961 to serve the same primary purpose it performs in the U.S. Air Force today – as a fighter jet trainer. Its lineage comes from the Northrop F-5, designed in the 1950s as a supersonic, lightweight fighter aircraft. The minimal design and small yet powerful engines made it cheap to produce, maintain, and export to ally nations.

While the F-5 was being produced for export, the U.S. Air Force recognized its capabilities and ordered the F-5C, which would fly thousands of combat missions in Vietnam. Meanwhile, the T-38 designated airframe was replacing the subsonic T-33 jet trainer.

The T-38 uses two lightweight General Electric J85 turbojet engines, with afterburners, mounted on the centerline of the aircraft. These small engines have a thrust-to-weight ratio nearly twice that of the larger F-4’s engines and can propel the T-38 to 30,000 feet in one minute. The small wings with a span of only 25 feet and sleek fuselage minimize its drag and increase its maneuverability, earning it the nickname “white rocket”. It’s capable of speeds up to Mach 1.6, a service ceiling of 40,000 feet, and loading of seven Gs.

According to Northrop’s website, almost 1,200 Talons were produced between 1961 and 1972, on time and under budget, with over 500 of those still in service today. The aircraft all have an average of 15,000 flight hours and steadily increasing thanks to airframe upgrades. Northrop estimates that more than 72,000 U.S. Air Force pilots have trained in the aircraft since its inception. Many other air forces throughout the world also train in the T-38.

Utilization of the Northrop T-38 Talon 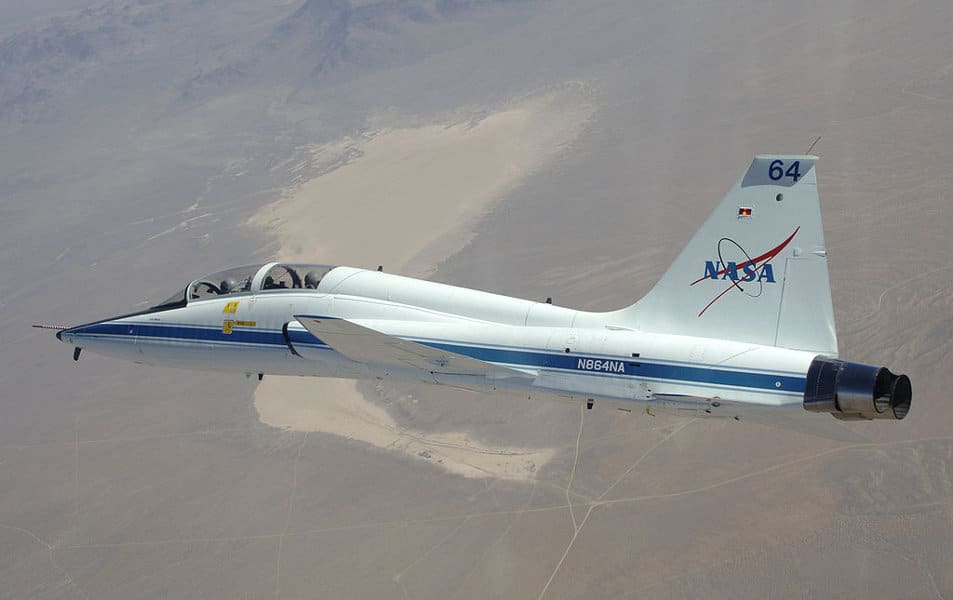 The T-38 hasn’t only been used as a U.S. Air Force trainer. Long before the space shuttle came into service, NASA astronauts were training in the T-38 to see what it would look like to land a spacecraft on long runways from high altitudes. Astronauts fly the T-38 to maintain their flight currency. Pilots of larger, expensive aircraft like the B-2 bomber also fly the T-38 for that purpose.

The T-38 is also a popular chase plane for use in experimental aircraft programs, both for the U.S. Air Force and NASA, and is also used as a platform itself for experimental weapons and avionics systems. NASA is currently photographing sonic shockwaves produced by transonic T-38s to develop aircraft with “quieter sonic booms”. 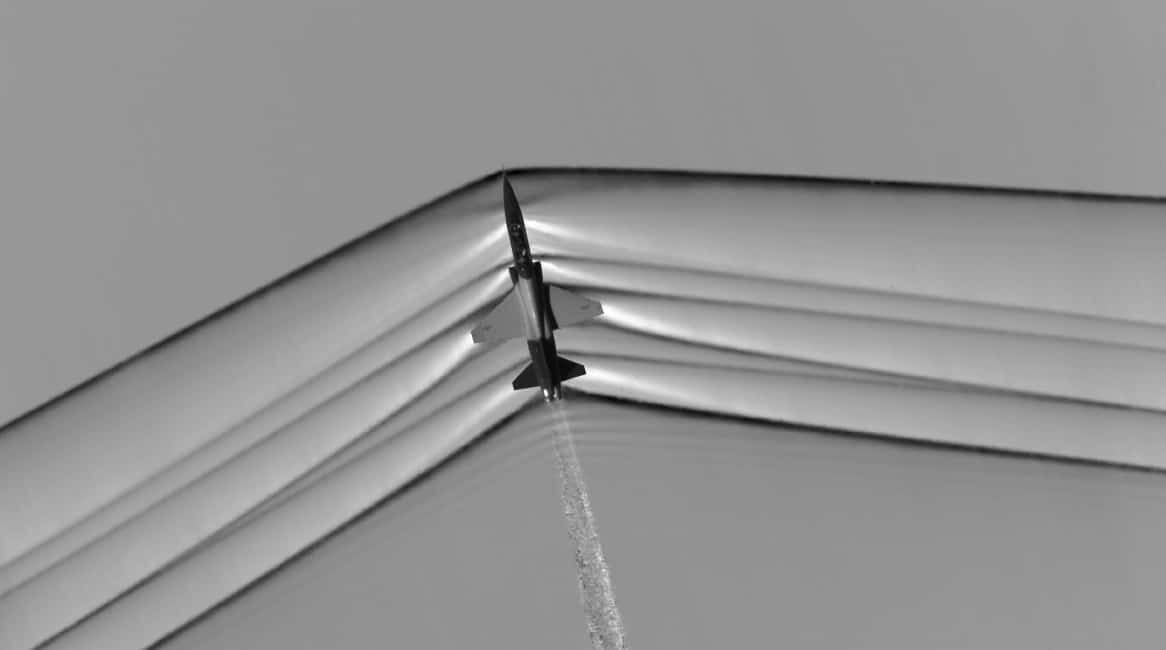 Aggressor squadrons also used the T-38A to fly as the “bad guys”, mimicking Soviet aircraft during training in the Cold War (now reference the movie Top Gun). These T-38s were replaced by the similar F-5 in 1976.

The U.S. Air Force aerial demonstration team, the Thunderbirds, also used the T-38 as their demonstration aircraft from 1974-1982. The Thunderbirds had been using the large, fuel-hungry F-4 Phantom up through 1973, when the OPEC oil embargo started. The high fuel prices grounded the F-4s for most of the season. As a result, the Thunderbirds switched their platform to the T-38A – five T-38s use the same amount of fuel as a single F-4.

An accident in 1982 killing four demonstration pilots ended the era of the T-38 and saw the beginning of the current F-16 era. 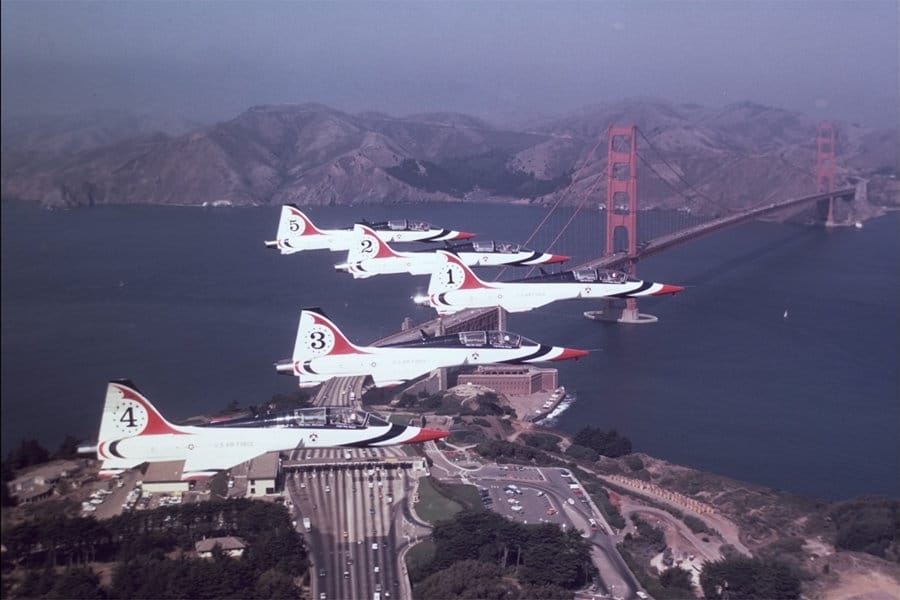 The T-38A is the original, basic supersonic trainer. Some of these T-38As were converted to the AT-38B, “AT” designating it as an attack trainer. This variant was equipped with a gunsight and centerline station to carry a practice bomb dispenser and rocket pods. The AT-38B was used as a “transition aircraft” for pilots between Undergraduate Pilot Training and training in their primary weapon system. Giving them an introduction to aerial combat and ground attack in the T-38 greatly reduced the costs of training them with these skills in their major airframe.

Simultaneous with the Pacer Classic program is a wing upgrade program. Part of what makes the T-38 so light is the structure of the wings – they’re comprised of a lightweight honeycomb structure covered by an aluminum skin. The wings are prone to fatigue, and the fleet has mostly received entirely new wings made of a more advanced aluminum. This too will extend the service life of Talons past 2020.

To keep up with the technology of the operational fleet, most T-38As and AT-38Bs were upgraded to the T-38C as part of the Avionics Upgrade Program started in 2001. This program introduced glass cockpits, electronic bomb scoring, a head’s up display, GPS, and other avionics improvements. 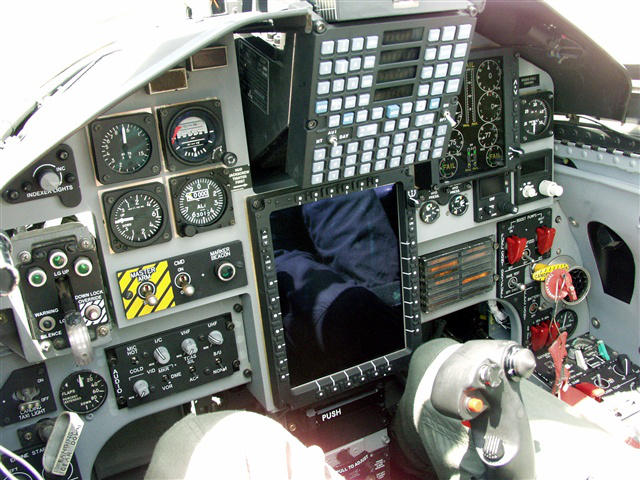 Simultaneous with other upgrades, T-38C engines have also been modified as part of the Propulsion Modernization Program, started the same year as the avionics upgrades. The PMP improves reliability of the J85 engine and increases thrust at low altitude with injector modifications.

With Pacer Classic III, at least 150 Talons will be in service through 2029. Beyond that, there is currently really no need to replace the T-38 though the Air Force has introduced the T-X program to field a replacement. Budgetary restraints have been delaying the T-X though there are already a few competitors.

No matter how long the Northrop T-38 Talon remains in service (so far 54 years), it’s just one of those “cool looking”, memorable aircraft whose legacy will go on indefinitely.