Upon examination, NTSB investigators found that wiring in an area of PA-31T aircraft "showed evidence of electrical arcing" and that the sections of hydraulic lines that ran through the area "were consumed by in-flight fire."
Anders Clark, January 10, 2017
6.31K 0
Home » Aviation Articles » News » UPDATE: FAA Issues AD Regarding Piper Cheyenne Wiring
70
SHARES
ShareTweet

Within the NTSB’s requested 30-day time frame, the FAA has responded to their safety recommendation and issued an airworthiness directive (AD) regarding a wiring problem in certain Piper Cheyenne aircraft models.

According to the agency, the AD applies to the following models:

The AD requires thorough and regularly repeated visual inspections of the wiring below the main circuit breaker panel, in order to verify proper clearance and check for any signs of damage. In addition, it calls for rerouting or replacing wires and/or parts as necessary to maintain compliance. The AD was prompted by a fatal accident where thermal damage was discovered in the area of the main circuit breaker panel, and according to the agency, they settled on issuing the AD after evaluating all the relevant information and determining that “the unsafe condition described previously is likely to exist or develop in other products of the same type design.”

Cost Estimates From the FAA

The agency says that they believe the AD affects 335 airplanes registered in the US, and offers the following cost estimate for the necessary inspection:

They also offer the following replacement parts estimate if the inspection finds it necessary:

We estimate the following costs to do any necessary replacements that would be required based on the results of the inspection. We have no way of determining the number of aircraft that might need these replacements:

The FAA also adds that they have no way of knowing the number of affected aircraft that may need replacement parts.

For those interested in reading the details of the AD, you can do so here. In addition, the FAA welcomes comments on the AD, which they will be collecting until March 24, 2017. To comment, head over to this webpage here.

On Monday, the NTSB issued an “urgent safety recommendation” to the FAA, advising them of an unsafe wiring problem on Piper PA-31T series aircraft that may lead to arcing and may cause fires.

According to the agency, the Piper PA-31T safety recommendation comes after preliminary findings from their ongoing investigation of a July 29, 2016, in-flight breakup of PA-31T medical transport in California. In their investigation, they found “evidence of thermal damage near the airplane’s main electrical bus circuit breaker panel” while noting that this enclosed space also includes hydraulic lines running directly below the panel. Upon further examination, investigators found that wiring in this area “showed evidence of electrical arcing” and that the sections of hydraulic lines that ran through the area “were consumed by in-flight fire.”

The agency says that evidence gathered up to this point indicates that the in-flight fire originated in this shared area where the electrical wires and hydraulic lines may have been in contact. 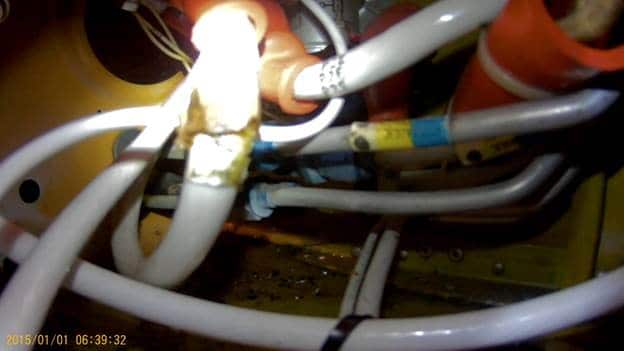 (In this photo, courtesy of the NTSB and taken by Mike Bauer, an exemplar PA-31T aircraft shows the white electrical lines that in close proximity to the metal hydraulic lines.)

The NTSB says that currently, maintenance procedures only call for a general visual inspection of the floor mounted circuit breaker panel and the surrounding area in question. They feel that this is not adequate because the location and confined nature of the space may allow the electrical wires and hydraulic lines to be in contact without being detected. Using a borescope and camera, NTSB and FAA investigators carried out an examination of this area on six additional PA-31T aircraft, noting that in every case, the electrical wires and hydraulic lines were in direct contact.

The NTSB believes that it’s necessary for PA-31T owners and operators to both identify and repair damaged wires in the floor below the main circuit breaker panel and also ensure that there is proper clearance between the electrical wires and hydraulic lines. And though the FAA put out an SAIB (special airworthiness information bulletin) on December 16, 2016, regarding this issue, the NTSB feels that further action is merited. Specifically, they think the FAA should issue an emergency airworthiness directive, requiring “mandatory action and a shorter timeline for addressing the issue” than was outlined in the SAIB.

According to the NTSB, in this and the case of other urgent safety recommendations, they are issued before the completion of an investigation when the agency feels that their ongoing investigation is showing that “an imminent threat to life and safety exists.” In the text of the letter the NTSB sent to the FAA (which you can read here), they ask that the FAA respond regarding the actions the FAA plans to take within 30 days.

Featured Image: D Ramey Logan, CC3, Note: This is not an image of the aircraft involved in the accident.