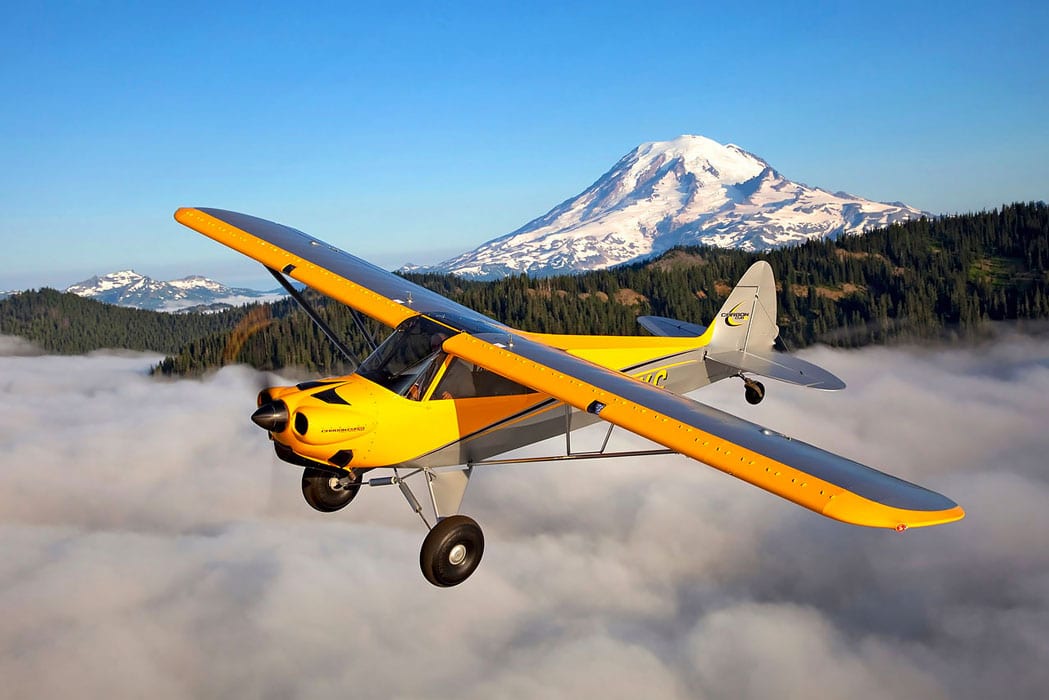 Diving into emergency landings and the engine out procedure in the Sierra Nevada Mountains.

Last week, I was tasked with memorizing the emergency in-flight engine out procedure. I discovered today that I did not do as well as I thought when my instructor, Dave, surprised me by pulling out the carb heat and throttle somewhere to the north of the airfield.

Even though I knew he wouldn’t let us crash, as we started descending, I found myself doing my best imitation of a deer in headlights. ‘Okay okay okay,’ I thought frantically. ‘Why can’t I even remember the first thing on the checklist??’

Then it hit me: fly the plane.

I pitched for level flight and trimmed to achieve best glide speed- 65kts in the Skyhawk I was flying. I found myself wanting to jump ahead in the checklist, so Dave had to remind me, “None of that matters if you don’t find a place to land.”

I scanned the snowy, mountainous terrain. We were directly over Stampede Reservoir, which at this time of the year is a large, but shallow, half-frozen lake. Not a great place to land.

I pointed to the west of Stampede at an area that looked like it could be a field but was probably another partially frozen pond covered in snow. “Could we land there?”

“I don’t know, could you?” Dave responded in a way that totally means ‘no.’

I whipped my head around looking for another place to land. “How much time do you have?” Dave asked in a way that means ‘not much.’

“Uh… not enough?” I responded anxiously. I pointed at a ski slope out in front of us. “Do you think that’s wide enough to land on without tearing our wings off?”

“I don’t think we’d get the chance to find out,” Dave responded. “How high are you?”

I looked out the side window and guesstimated, “Probably about 500 feet?” I’d blanked on the fact that this fancy glass panel C-172 definitely had an altimeter and I knew the field elevation. Luckily, I guesstimated correctly- my first success of the lesson.

I found myself repeatedly doing the thing I know not to do in an engine-out situation: needlessly turning. With each turn and no power, I was losing precious altitude. “Where are you thinking about landing?” Dave asked, noticing I was floundering.

“What about that nice wide field right behind us?”

I looked out the window and felt my face get hot. My tunnel vision completely obscured the perfect emergency landing area I’d just flown over. As I turned around one last time to put us over the snow and away from the trees and frozen pond, I ran through what Dave calls the Sacred Seven:

By the time I finished rushing through that, it was too late to ask my passengers to push their seats back and fasten their seatbelts: by Dave’s estimation, we’d be toast. Or in this case, popsicles.

Back up we go. Carb heat cold, throttle in, let’s do it again!

My CFI Shows Me How to Survive an Emergency Engine Out

I’d forgotten the trim wheel was rolled all the way to the stop (nose-high side) and so when I put the throttle to the firewall, the little Skyhawk became a rocket and we shot straight up, losing airspeed like nobody’s business. I frantically scrolled it up and we climbed at a more reasonable pace up to 8,500 feet, approximately 2,500 feet  AGL.

This time, Dave ran through the emergency engine out procedure with me shadowing the controls and observing. He talked it through so calmly I became more confident in my ability to not die the second time around. He brought us down so nicely (and low) over the snow, I thought he might actually land! Not to mention he was able to run through the entire checklist and put the flaps in and everything.

I began glider school based on the belief that learning to fly without power would make me a better powered-pilot.  I base out of Truckee, California, and there happens to be a rather renowned glider school at the airport.  They operate from May to October and are a premier location in the world to fly gliders or “Soar” largely due to the incredible winds created by the mountains. [Click to read more…]

Surviving My Second Mock Emergency Landing with the Engine Out Procedure

Back up we went. This time, I looked for a landing place while adjusting the pitch and trim for best glide instead of passively watching the trim wheel and altimeter and assuming I’d find a place to put us down. I decided to land on the snowy field near to the spot Dave chose last time, which was very close to us. I flew a long downwind leg while running through the Sacred Seven, pretended to call the Truckee-Tahoe Airport CTAF (“Truckee Traffic mayday mayday this is Skyhawk 68F engine-out, landing 9 miles north, please send help! Truckee”), pretended to squawk 7700 on the transponder, told Dave to scoot back, buckle up, open the door, and protect his face because “We’re in for a bumpy landing!”, flipped on the flaps, and brought us down low over the snow.

I pushed in the carb heat and throttle and retracted the flaps incrementally once we hit 60kts. We climbed back up, all the way to 9,200 before I realized I left the trim tab at “insanely nose high.” Dave asked, “What altitude are you supposed to be at, again?” and I sheepishly tried to put forward pressure on the yoke before Dave yanked the throttle out again. “Pitch for airspeed, power for altitude. You gotta remember that.”

We did one more mock-landing which went fairly well, and then Dave had me take us into an ascending 360 before heading back to the airport to run through the pattern a couple of times. It’s becoming very clear to me that I need some work on standard rate turns, which is a nice way of saying I hate them. They just seem like a waste of time, and trying to watch the white bar line up with the little notch mark on the fancy moving LED display on the glass panel is like trying to find Waldo in a crowd.

Anyway, we headed back toward the airport, I gave the five mile out call (which went… okay), and we turned onto the extended right base for runway 20. I brought us down for my smoothest landing ever (seriously- I wasn’t on the center line but DAMN that felt good), and we took off again. The pattern for runway 20 is pretty strange, like most of the patterns at Truckee. It is right pattern entry (fly overhead the sewage treatment plant on an extended right base), and departure calls for a left 270, fly overhead the field to the sewage treatment plant, and then continue on course. After getting to the other side of the creek, I started my 270-degree standard rate turn to the left, flew alongside the perpendicular runway (runway 29), and made another turn to enter right base for runway 20. It’s this big wonky figure 8 and you have to do it every time for touch-and-goes on runway 20. It’s kind of fun, but mostly a hassle.

Wind Gets Me Down

We went back around and as we turned final and flew in, we were flying a little low and slow. As we approached the end of the runway, all of a sudden our lift disappeared and we sunk like a rock. Dave grabbed the controls and punched the power, and took us in for this landing.

“We haven’t talked about this yet, so it’s not your fault you didn’t know,” Dave said as we touched down, “But you may have noticed the drop at the end of runway 20.”

“On days like today, when there’s a good headwind coming down runway 20, that drop creates a downdraft that can easily pull light planes like ours down. I’ve seen a ton of crashes at the runway over the years…” He proceeded to point out different places planes have crashed as we rolled back onto the taxiway to do another lap (we ran out of runway with the whole downdraft fiasco).

The next lap around went well, and Dave took the controls on the last one to help me visualize the figure 8 pattern without focusing on everything else. I mostly noticed how gorgeous the mountains looked now that snow has started to melt a bit, revealing the deep blues and purples of the shadows contrasted against the remaining white.

Finishing Up: Studying the Engine-Out Procedure and the Pre-Solo Test

After we taxied back to Sierra Aero and parked, Dave and I walked back to the office and chatted while he filled out my logbook. I jotted down my homework, and he told me I’m a good student! “You’re fun to fly with, and you pay attention.” It felt nice to get that little gold sticker of appreciation from such an awesome instructor.

For my flight lesson tomorrow, Dave wants me to get the airport information for Nervino, a small one-runway non-towered airport somewhere north of here. “I need you to be able to fly and enter the pattern here and there if I decide to take a nap.” I laughed and he quickly clarified that he was not going to take a nap, but “you know what I mean.” I did indeed! He again reminded me to practice for the pre-solo test, and I felt a little bubble of excitement rise into my throat. I’m at 10.6 hours, and it seems like this solo thing is going to happen a lot sooner than I thought!