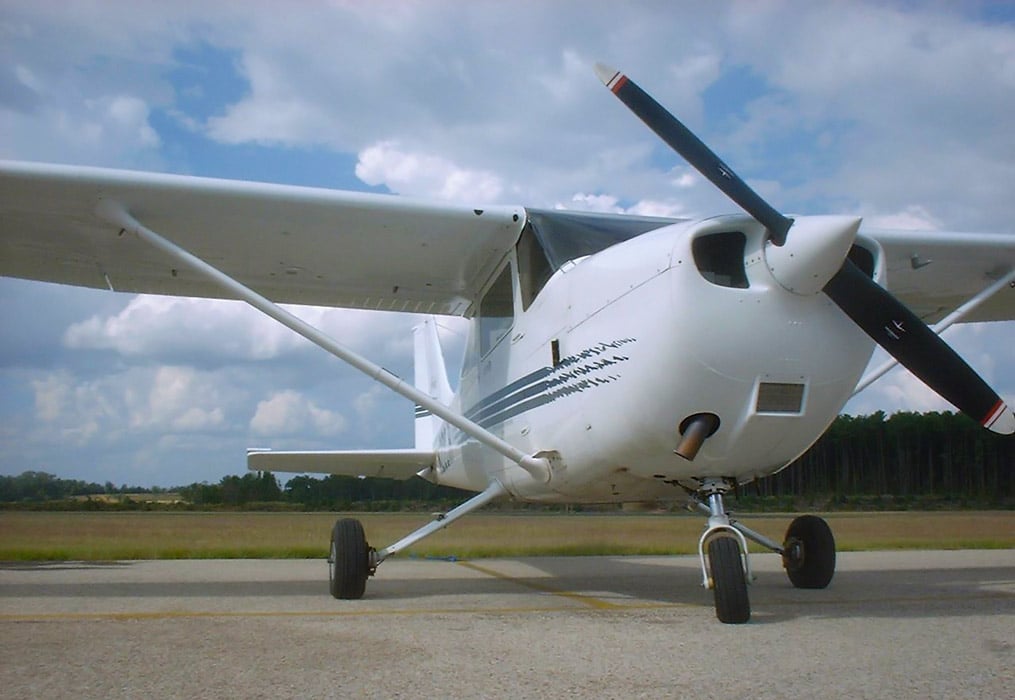 Cessna 180 Skywagon: The Pickup Truck of the Air

By Crista Worthy with Jim Davies

If you are a fan of the larger Cessna taildraggers—the 180 and 185—you know it gets harder to find a good one each year because they are not made anymore. Well, if you want to know where they’re all hanging out, just go up to Anchorage, Alaska. Hop onboard a floatplane and as you climb up above Lake Hood Float Plane Base, look down. You’ll see row upon row of Skywagons parked right there, waiting to fulfill their missions of hauling people and cargo in and out of otherwise inaccessible outposts. It reminded me of the first time I stepped into a major trading post in Gallup, New Mexico, and saw more turquoise than I thought existed in the entire world.

There is another place that harbors an abundance of Skywagons, and that’s in Idaho, America’s backcountry Mecca, where I live. Most of these airplanes, however, are safely tucked away in hangars when not in use and thus out of view. More of my friends fly a Cessna 180 Skywagon than any other airplane. Although the Cessna 185 (both aircraft are referred to as the Skywagon) has a higher useful load, if you don’t need to haul around a ton of passengers and cargo, the 180 will get you into even tighter spaces, due to its lighter weight, especially after you’ve modified it, like most of my friends up here have done with their airplanes.

The Cessna 180 Skywagon that belongs to my friend Jim Davies, past president of the Idaho Aviation Association, is a perfect example. Like everyone else I know here with a 180, he has removed the back seats and replaced them with fold-up bush seats since he normally flies alone or with just one passenger, usually his wife Marsha or his friend Hank.

I don’t come from a flying family. Originally, I wanted to be a garbage man so I could hang on the back of the truck, but later dreamt of being a pilot. I got my private pilot license in 1967 as part of the Air Force ROTC program. Flying fighters for 27 years and heavies for 16 gave me a lot of diversified experience, but I always managed to fit in some GA, light airplane flying. I was very active in the Shaw AFB Aero Club where I earned my CFI/CFII/MEI. When I moved to Idaho, I could not resist the backcountry. I took some formal training, which I think is vital, and got involved with the Idaho Aviation Association, and the Idaho Aviation Foundation. I am still active today and my 1955, slightly modified, Cessna 180 has been the ideal airplane for my adventures.

To me, the Cessna 180 is an excellent all-purpose machine that does almost everything well, and it has now become known as the “pickup truck of the air.” The 180 can’t carry as much as its big brother, the 185, but it is lighter on the controls, making it a pleasure to fly.

My current airplane is actually my second C-180, but there were 25 years between the two. I bought it recognizing there were a few things that needed to be done to it, but had no idea how that snowball would grow. Through the years, I have upgraded the instrument panel with a six-pack of flight instruments, electronic engine instruments and a Garmin 430W and Garmin 496. I keep it IFR certified. I replaced the original interior with a Selkirk kit, installed B.A.S. shoulder harnesses, and fold up Atlee Dodge bush seats in the back. I had heavy-duty landing gear legs installed along with the Pponk gear mod and 6 bolt wheels. I also added an extended baggage area with a barrier net behind the front seats. This was all done legally, by the way, but I did do most of the work.

On the performance side, I installed Micro VGs, and replaced the engine with a Pponk O470-50, rated at about 275 HP. I also opened up the cowl in front of the oil cooler for obvious reasons. I kept the 2-blade prop, but went with the longer 86 inch. I like the look better than the 3-blade and, besides, it is easier to hang wet towels on it. My flying buddy, Wayne Thiel, has an identical airplane but with a 3-blade prop. I find the ride in his airplane is a little quieter and smoother, but I am not changing.

With the Pponk engine mod, I can cruise at about 145 KTS at 8–10,000 feet and burn about 13 GPH. If I pull it back to the old J model cruise speeds, it will only burn 10–11 GPH—so choose your poison. While I don’t do much off-airport flying, some of the airstrips I frequent are not much better than a meadow or dirt road. The airplane handles the backcountry environment impressively. I now use 8.50 X 6 tires, but it does fine with 8.00 X 6s as well. The VGs enhance my comfort level down in canyons and on short-strip approaches by increasing the aileron authority at slower speeds. Additionally, I can’t prove it, but the VGs on the rudder seem to help significantly in crosswinds. While there is also a modest reduction in stall speeds, the aileron authority is what I notice most.

I think it is worth mentioning that none of these mods result in an airplane that can go anywhere, anytime. The laws of aerodynamics still apply, so I am very cognizant of runway length/slope and condition, as well as density altitude and winds. Because of those factors, I never promise to be somewhere at a particular time, and I don’t commit to landing at a given airstrip until I get there and check it out. I do my summer backcountry flying before noon and evaluate what my proficiency is on that day for the conditions that exist before I commit to a given strip. As a general rule of thumb, I avoid the backcountry if winds at 9,000 feet are greater than 20 knots and I will take off with up to 15 knots of tailwind rather than takeoff uphill. I will go into an 800-foot long, level strip if I’m feeling good, but usually think of 1,000 feet long as a minimum. Runway slope changes all that, of course.

If I could change anything about the airplane, it would be to have someone do the work and bear the expense of approving a max gross weight increase afforded by the VGs, as they have done with other models. (Or find some other way to increase the useful load.) There are times when I would like to have more fuel than the current 55 gallons useable, but that would necessitate the useful load increase so I could still carry my camping gear, or whatever else I am hauling. While I do keep my instrument currency and like to take trips, my focus is on takeoff /climb performance, and backcountry operations, not cruise speed.

The 180 is a fantastic airplane that gives me hours and hours of pleasure, but it is a high performance taildragger and deserves respect. It will bounce if you are not on speed and profile for landing. It will swap ends, as many have demonstrated, and in the wind, it needs to be “flown all the way to the chocks.” When loading, it is hard to get the airplane out of CG aft, but you can easily over-gross the older ones.

The Cessna 180 Skywagon is both a challenge and a reward. I feel privileged to own and fly one.

Changes to the Cessna 180 Skywagon Through the Years

After World War II, production of recreation-purposed single-engine aircraft in the United States shifted into high gear, as thousands of veterans and other increasingly upward-mobile Americans began to purchase airplanes. The modern history of Cessna taildraggers began with the production of the Cessna 120 and 140 in 1946, right after the war. These were only two-seat aircraft, so Cessna followed them up with the Cessna 170, introduced in 1948 as a four-seat airplane equipped with a 145-HP Continental C-145-2 engine.

In the quest for more power and utility, Cessna began work on a larger aircraft, and introduced the Cessna 180 Skywagon in 1953. Powered by a 225-HP Continental O-470-A, the airplane gained immense popularity after 1964, the year Geraldine Mock became the first woman to fly around the world. She made her flight in a 1953 Cessna 180 christened the Spirit of Columbus and memorialized in her book, Three-Eight Charlie. For years, the airplane hung suspended over production lines at the Pawnee Cessna plant in Wichita, Kansas. It now hangs in display at the National Air and Space Museum.

By 1956, horsepower was increased to 230 via the Continental O-470-K engine. Over subsequent years, horsepower remained the same, although the O-470-L engine was substituted beginning in 1959, and max gross weight slowly increased from 2,550 pounds to 2,800 pounds.

Over 6,000 Cessna 180s were built between 1953 and 1981, the year production ended. The Cessna 185 more powerful and has a higher useful load, but many backcountry operators find that the 180 is the “Goldilocks” airplane, not too small, and not too large—hence its enduring popularity.

Mods are many and include, aside from those mentioned above by Jim on his airplane, amphibious or straight floats and an enormous belly cargo pod with a 300-pound carrying capacity.

Important safety mods include B.A.S. inertial reel shoulder harnesses, available through their website. They also sell tail cone lift handles that make it easier to move the 180 around on the ground without damaging the tail.

Aerostop seat locks prevent your seat from rolling back at the most inopportune moment, ie, when you add power for takeoff, available through Aircraft Spruce.

Kenmore Air Harbor can provide a gross weight increase up to 3,190 pounds on Cessna 180s year 1964 or newer with the 185-style vertical fin and rudder. Wing-X wingtip extensions shorten takeoff rolls and are also popular, available through this link.

For those who hate having to reach down while pulling up or letting down the “Johnson Bar” flap handle just before or after landing and takeoff), EZ Flap makes an extension so you can keep your eyes outside.

Auxiliary tanks, improved fuel systems, and better fuel caps can be had through Flint Aero, O&N, and Monarch Premium Caps, or just ask your mechanic.

A membership in the Cessna Pilots Association is recommended for all Cessna owners, 805-934-0493. The Cessna 180/185 Club holds fly-outs almost every weekend, spring through fall, and is a great way to meet other Skywagon owners. 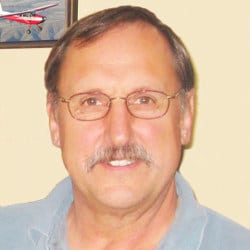 Jim flew RF-4s and F4Gs as well as the C131 and T-39 Saberliner in the Air Force before a 16-year career with Fed Ex where he flew the Boeing 727, DC10 and Airbus. For Jim, though, nothing beats flying his red Cessna 180 deep into the backcountry of Idaho.