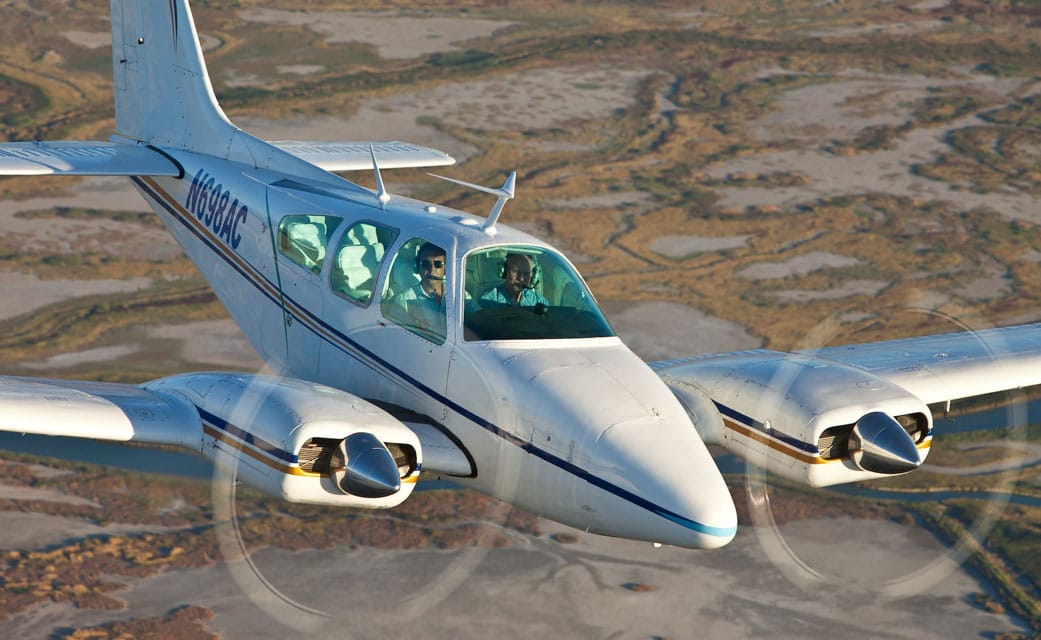 Aviation Safety: The Right Mindset and Attitude Are As Important As Skill

A private pilot looks at ways you can work to avoid a mid-air collision.

On a hot, hazy August afternoon in 1996, we were droning along above Arizona’s Painted Desert at 10,500 MSL, headed due south. Two kids slept in the back of the Cessna 182. The ground and sky seemed to merge into a uniform beige; the radio was silent. I could almost have dozed off myself. Then, a dot appeared straight ahead—was it a new speck of dust on the windshield? In the blink of an eye, the dot transformed into a beige aircraft coming right at us.

Instinctively, I lurched the yoke to the right, but at the same moment, the other pilot wrenched his aircraft to his left, still on a collision course. With both hands, I jerked my yoke all the way left and stomped on the left rudder, dumping the un-belted kids screaming onto the floor. Belly-to-belly, the King Air flashed by us within 50 feet and just like that we became survivors of an extremely close near mid-air collision.

That was the last time I ever voluntarily flew VFR without ATC flight following.

The truth is that a mid-air collision is rare. The other truth is that they usually occur in the busy airspace near airports and their traffic patterns. The “Big Sky” theory holds true most of the time. But as our experience shows, most of the time isn’t good enough. How can you avoid ending your flying career—and life— in this sad way?

Unless you’re in IMC, you simply must always keep an eye out for other aircraft. Be aware that in hazy conditions, all objects, including traffic, will appear to be farther away than they actually are. Some people find that yellow sunglass lenses help vision in smoggy or hazy conditions. Both the King Air pilot and I had probably succumbed to empty-field myopia, where the eye, with nothing much to focus on, relaxes to an easy focal distance of around 30 feet—useless for spotting traffic before it becomes an emergency.

There’s a right way to scan for traffic. First, take a moment to look at something on the ground and wake up your eyes. From your initial training, you should recall the best way to scan is to move your eyes about 10°, stop, focus, and then move another 10°, and so forth, instead of panning across your entire field of vision, because your eyes focus better when they are not moving. Don’t forget about your six o’clock either—most of the time, a mid-air collision occurs when one aircraft overtakes another. Be aware of your aircraft’s blind spots.

If you see a target that’s not moving, it’s likely traveling directly toward or away from you; turn until you can see it move. VFR hemispherical cruising altitudes are supposed to keep opposing traffic separated by 1,000 ft., but if you’re flying due north or south (as in our case), someone may be flying almost opposite your heading, be legal, and be at your same altitude. Remember that with increasing use of GPS, more pilots are navigating more accurately, increasing the potential for collisions near navaids like intersections or VORs, or along airways, so be extra vigilant in these areas. You could even consider offsetting slightly when flying along an airway.

Use flight following! Workload allowing, ATC should be happy to give you VFR flight following, and they’ll often call out your traffic long before you could ever see it. Don’t think you’re bothering them. Most controllers say they’d much rather know who you are and what you’re flying, even if it’s a little more “work” for them. Another bonus: in case of emergency, you’re already in radio contact and don’t need to fiddle around trying to find the frequency. Just don’t become complacent with your traffic scans, because ATC is not required to call out traffic for you. Legally, “see and avoid” is 100% the PIC’s responsibility in VFR.

Redouble your traffic-spotting efforts near an airport. Listen attentively to the radio and form a mental picture of other traffic. Don’t blast a straight-in landing when there’s a traffic pattern, and if you’re IFR, announcing your position as “crossing Dixie intersection at 2,500” is useless to VFR pilots who may be unfamiliar with such terminology. “5 miles northeast of the field at 2,500” is something everyone can understand. Remember, even if there’s a tower, in Class D or C airspace, you’re still responsible for your own separation when VFR.

These days, there are many types of traffic-spotting equipment available. The FAA has encouraged people to become compliant with the upcoming ADS-B requirements by offering free traffic-identification technology (TIS-B) to pilots who equip now. However, you’ll only get the full benefit by equipping your aircraft to broadcast your position “out” as well as “in”.

Just last week, FreeFlight Systems introduced an ADS-B Out unit that’s fully compliant with the FAA’s 2020 NextGen mandate for less than $2,000. This unit includes a TSO’d ADS-B Out transmitter, built-in WAAS GPS receiver, ADS-B and GPS antennas, installation kit and control head. Your only extra cost will be the installation.

However, the company says it will only build and sell 10,000 units at this extra-low price of $1,995, and will release a list of participating dealers in April and start shipping the products in June. The avionics maker is offering the product as part of the company’s “Equip-It 2020 Program,” a program providing complete, rule-compliant ADS-B systems for light general aviation aircraft for less than $2,000. The deadline is Jan. 1, 2020, and it’s not likely to be extended.

Here’s the part that can help you avoid a mid-air collision: FreeFlight Systems also offers the RANGR Lite FDL-978-XVRL, a rule-compliant unit that adds an ADS-B In receiver and Wi-Fi capability for displaying subscription-free weather and traffic data on a tablet. That product retails for $3,695.

Bottom line: buy an “extra set of eyes” if you like, use ATC’s radar when you can, but never let down your guard. Ask your passengers for help as well—no target should be considered too small. With a closure rate of hundreds of miles per hour, it’s amazing how fast that target can fill up the view!