Al Wilson, born 1 December 1895, was a true barnstormer.  He spent his life taking part in stunts that would make a grown man quake in his boots.  Born in Harrodsburg, Kentucky, Wilson was passionate about aviation from an early age.  Wilson’s family moved to Southern California when he was young, where he continued dreaming about learning to fly.  He got his first taste of airplanes when he started at Schiller Aviation School, working as a maintenance assistant.  He also began taking piloting lessons here.  Eventually, he began teaching others how to fly, and landed at the American Aircraft Company as their chief instructor.

Next, he moved on to Mercury Aviation Company where he served as a manager.  The company was founded by one of his students, Cecil B. DeMille (yes, THAT Cecil B. Demille).  Wilson started performing stunts, including wing-walking and soon became very skilled at it.  He left Mercury and pursued a career in stuntwork and as a barnstormer.

Wilson worked together with other legendary stuntmen like Frank Clarke and Wally Timm, frequenting air shows and working for movie companies like Universal.  Eventually, his stunt roles led him into acting.  His first role was the serial ‘The Eagle’s Talons’.  He continued acting and producing his own movies until 1927, when he returned primarily to stunt work.  In 1930, he worked on the famous Howard Hughes movie Hell’s Angels.  While filming, he was involved in a terrible accident which claimed the life of a mechanic.  After this, Wilson left behind the world of stunt work in movies.

One day, after returning to his barnstorming ways, Wilson was flying over southern California. He accidentally stepped off a wing into the air, without a parachute. A pilot named Frank Clarke was flying below and behind and flew down toward the falling Wilson. Wilson crashed head-first into Clarke’s Jenny biplane and stuck in the upper wing panel.  Clarke landed the plane and Wilson emerged unscathed, to continue his barnstorming career another day!

This career, however, came to an end a short time later.  In 1932, during the National Air Races in Cleveland, Wilson crashed his aircraft and passed away a few days later from his injuries. 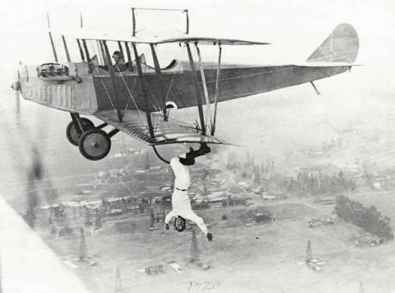