Variations of the Robinson R44 Helicopter

The first Robinson R44 helicopter to be produced was the Astro, certified by the FAA in 1992. This helicopter was in many ways just a larger R22 – and that shouldn’t be surprising as it was developed from the R22. It has a 260 hp carbureted Lycoming O-540 six-cylinder engine and flight controls that are directly linked via pulleys and push-pull rods like the R22.

The engine, like in the R22, is derated to 205 hp for continuous operation. This is partly due to transmission design limits, but also to expand the life of the engine to 2,200 hours or 12 years between overhauls. This leads to a dramatic reduction in operating costs.

The Astro could be a bit tiresome to fly, thanks to the direct flight control linkages that transmitted a lot of shake and feedback resistance to the pilot. Robinson introduced the successor to the Astro, the Raven, in 2000. The main difference between the Astro and the Raven is the hydraulically assisted flight controls. A small reservoir above the engine feeds fluid to hydraulic servos, making time on the controls not just less tiring, but also smoother. It was like adding power steering to the R44.

The introduction of the Raven was a great move for Robinson and sales soared. Who doesn’t love power steering? It was still limited in performance, however. At max gross it could only hover at around 6,000’ (specified at 6,400’ but that’s with a new engine and clean blades). And that’s in ground-effect. Out of ground effect, its hover ceiling drops to less than 4,000’.

These inadequacies were addressed a couple years later when Robinson introduced the Raven II in 2002. The Raven II was now equipped with a fuel-injected, rather than carbureted, Lycoming IO-540 six-cylinder. Max takeoff power was increased from 225 hp to 245 hp, and the hover ceiling at max gross increased from a published 6,400’ to 8,950’. Out of ground effect, the hover ceiling almost doubled from 4,000’ to 7,500’. Slightly wider blades were also responsible for the increased performance.

Both the Raven I and Raven II can be equipped with floats instead of skids; these models are known as the Clipper I and Clipper II, respectively. Fixed floats are a great option for continuous operations over water, and some operators don’t just continuously fly over the water but also make their normal day-to-day operations from the water. The sacrifice in performance is a fifty-pound increase to basic weight and a ten-knot reduction in airspeed.

For those who aren’t operating over water all the time but still want the peace of mind to be able to make a safe water landing in the event of an engine failure, the Clipper II is also available with pop-out floats instead of fixed floats. A small lever on the pilot’s collective will immediately inflate floats that are neatly folded up and tucked away on the skids – from a distance you don’t even know they’re there. These pop-out floats don’t impose any speed restrictions but they do add about sixty pounds to the basic weight.

And finally, Robinson just last year introduced the R44 Cadet. The Cadet is to be more primarily used as a training & utility helicopter. It also features the Lycoming O-540 engine but is derated to 185 hp continuous operation. The Cadet has a cargo area where the two rear seats used to be in previous models.

Who Flies the Robinson R44 Helicopter?

The Robinson R44 Helicopter, unlike the R22 but like many other turbine helicopters, is used for a variety of roles. It can be fitted with an external camera mount for a very cheap option for aerial photography. Even without the mount, the R44 still makes a capable, stable platform for photography with the doors removed. The windows can’t be opened so the entire door must be removed.

The R44 also makes a great tour bird. The visibility is outstanding for all passengers. Because there is no bulkhead separating the front passengers from the rear passengers, the rear passengers will also get the view out of the gigantic, unobstructed bubble window up front. Low operating costs make the tours more practical for both operators and customers. One of the things I’ve heard most often from tour passengers is how smooth the ride is. I’d like to take credit for some of that but the R44 is indeed a smooth machine to fly.

If I had to pick between flying the R44 and the R22 as a trainer, I’d without a doubt pick the R44. Of course, that does increase the cost of the helicopter flight training but it’s a much better option for those who have the financial means. The main reason is for safety – the R44 has much heavier blades than the R22, so it’s a little more forgiving during actual or simulated engine failures. Pilots have a few more seconds to react before the rotor RPM drop becomes unrecoverable. The R44 also handles much better in turbulence from both the natural environment and while hovering near buildings. Where the R22 gets thrown around and is difficult to control in these situations, the R44 just bullies its way through it. And finally, the extra power available and larger cockpit makes it a better (sometimes the only) option for larger and/or heavier students. This increase in power also makes it a better IFR trainer than the R22, which can barely handle the added weight from an IFR instrument stack.

Low operating costs and ease of maintenance also make the R44 a practical option for law enforcement and military use. The police versions are fitted with a gyro-stabilized infrared camera underneath the cockpit, a searchlight, loudspeakers, and a variety of additional communications gear.

Everyone transitioning into the Robinson R44 Helicopter needs to do some portion of their training without hydraulics. Flipping the little hydraulic switch on the cyclic and removing power to the pump really gives pilots some appreciation for the Raven versus the Astro!

The design of the R44 makes preflight and starting procedures very easy. Sometimes you’ll get a finicky engine that requires a little finesse with the mixture and throttle combination during start, but you’ll quickly learn the peculiarities of each helicopter. Once the engine is up to speed, only a few checks are required before you can pick up to a hover and be on your way. 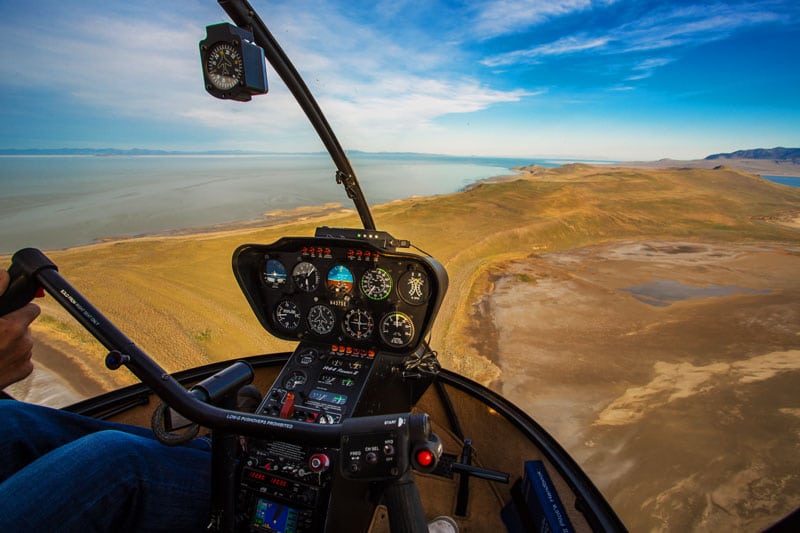 The visibility out of the front is outstanding, and the two seats up front have plenty of room, especially forward. Flight controls can be quickly added & removed in the left seat. The rear seat passengers will enjoy the visibility of the front seats, but it’s slightly more cramped back there. Tall passengers will find their knees folded up against the front seats. The R44 has a surprisingly quiet cabin given the thin construction.

One common complaint amongst R44 pilots is the fuel gauges. There’s no totalizer, only an analog needle indicating quantity for each tank. Even Robinson tells pilots not to trust the gauge, but fly the fuel burn and keep an eye on your watch. This is great except for two things – that only works when you start with full tanks, and the fuel burn isn’t published in the pilot’s operating handbook. I always used 15 gph, which is maybe just slightly conservative, but it makes the math easy and guarantees that even a fuel-hungry engine won’t consume more than you think. Robinson only recently started offering a glass cockpit in R44s.

The Raven II is particularly powerful at altitude. At density altitudes above 10,000’ you can still get a climb rate of nearly 1,000 fpm with a lightly loaded helicopter. However, with all four seats filled, you better be cautious and smooth on the controls when hovering.

Those transitioning from the R22 will be amazed at how “easy” engine failures are in the R44. Okay, I shouldn’t say that engine failures are easy, but when compared to the R22, the R44 is cake. The beast just seems to glide forever and without the touchy RPM fluctuations that the R22 has.

Summing Up the Robinson R44 Helicopter

The R44 is probably the top piston helicopter out there. This makes it the best choice for operators looking for a helicopter that can fill many roles, such as training, tours, and aerial photography. Acquisition and operating costs are low, and maintenance is very simple. There is no need to track life-limited parts because there is no such thing in the R44. The whole thing goes in for overhaul at 2,200 hours or 12 years, and that’s the only record-keeping there is (assuming all major components make it to this mark; they usually do).

This ease of operation and maintenance is the reason that, in 2015, the Robinson R44 helicopter was the world’s top-selling helicopter.