The Lockheed XC-35 and the Evolution of the Pressurized Cabin

The concept of a pressurized cabin existed in the aviation imagination as early as the 1910s.
Carly Courtney, January 6, 2017
7.18K 0
Home » Aviation Articles » History of General Aviation » The Lockheed XC-35 and the Evolution of the Pressurized Cabin
8
SHARES
ShareTweet

In 1937, the Lockheed XC-35 arrived, featuring both a pressurized cockpit and passenger cabin.

As early as the 1700’s, scientists were hypothesizing that the air around them was not just empty space, but filled with a fluid-like substance with volume and mass. Two centuries and many scientific advances later, Léon Teisserenc de Bort, a French meteorologist, and aerologist, discovered the existence of atmospheric layers (Well, two of them anyway. Teisserenc discovered and named the stratosphere and the troposphere.).

In 1934, Wiley Post (the first successful solo circumnavigator) created and demonstrated the first pressurized suit. The full-pressure suit allowed him to fly at altitudes as high as 40,000 feet comfortably. However, forcing pilots and airline passengers to wear bulky suits to travel home for the holidays simply wouldn’t fly, and so the search for an alternative solution to the dangers of “thin air” continued.

The concept of a pressurized cabin has existed in the aviation imagination as early as the 1910s when early aviators started making improvements to their aircraft designs that would allow them to climb ever higher into the sky. Within just two years, between 1910 and 1912, the world altitude record for fixed-wing aircraft spiked from 4,603’ in a Wright biplane to a then-unprecedented 18,405 feet by Roland Garros in a Blériot monoplane.

You Won’t Get Far without Your FARs!

As most pilots learn sooner rather than later, supplemental oxygen is required over 12,500’ if you fly there for over 30 minutes; above 14,000’, pilots are required to use oxygen at all times, and over 15,000’, each occupant must be provided supplemental oxygen (FAR 91.211), all for good reason. Hypoxia, or oxygen deprivation, can occur so gradually that you may be disabled by it before you even notice its effects, leading to confusion, clumsiness, drowsiness, a whole bevy of physiological problems, and eventually a loss of vision, then consciousness, and ultimately death.

Therefore, as the aspirations of hopeful aviators’ skyrocketed along with their new altitude records, supplemental oxygen, and pressurized cabins became a necessity. 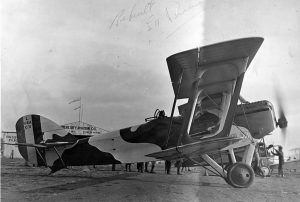 Military and commercial planes first began experimenting with high-altitude flight by way of enclosed, oxygen-enriched cockpits in 1920 with the Lepère United States Army Combat-11 (LUSAC-11).  This two-seat fighter aircraft was designed in France by Georges Lepère, but built in the United States for experimental purposes, and would go on to set many altitude records, as well as inspire aircraft manufacturers to improve upon the altitude-resistant cockpit concept.

In 1921, Glenn Curtiss, aviation pioneer, and manufacturer extraordinaire, was contracted to design 4,000 modified British Airco DH.9A airplanes for the war effort, which, when manufactured in the US would be reclassified as USD-9A, or “Ninak.” Only nine were built before the war ended and the contract was canceled, but one of those would go on to pave the path for the Lockheed XC-35 to make history. That one Ninak was further modified to include a pressurized, enclosed cockpit, and would be taken on the world’s first high-altitude pressurized flight, piloted by test pilot Lt. Harold Harris.

However, it wouldn’t be until 1937 that the United States would create a type of aircraft that not only featured a pressurized cockpit but a pressurized passenger cabin and crew area as well: The Lockheed XC-35.

In 1935, the United States Army Air Corps (the spiritual predecessor of the US Air Force) contacted Lockheed Aircraft Corporation to request an experimental aircraft capable of extended flights (over two hours) above 25,000’, with a ten-hour flight endurance, for a grand total of $112,197. Today, that would buy you less than half of a used ’75 Cessna Citation! Yikes. 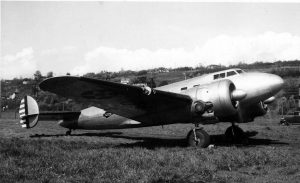 Two structure engineers at the Air Corps Engineering Division at Wright Field, Major Carl Greene, and John Younger, were the brains responsible for the birth of the pressurized cabin. To begin their journey to a pressurized cabin, the men, and their teams modified a Lockheed Model 10 Electra, a twin-engine all metal military monoplane which would soon after gain fame as Amelia Earhart’s plane flown on her attempted ‘round-the-world expedition in 1937. The Electra was fitted with a circular cross-section fuselage that could withstand up to 10psi of atmospheric pressure, small, thick windows that wouldn’t blow out dealing with high-pressure differentials, and two turbo supercharged Pratt & Whitney XR-1340-43 engines with 550 horsepower each.

Creation of the “Supercharged Cabin,” As the Army Called It

The fuselage was separated into two sections; a forward pressurized compartment that could hold two pilots, a flight engineer, and even a couple of passengers, and an aft compartment (not pressurized) that provided additional accommodation at lower altitudes.

The cabin pressurization system created by Major Green and Younger paved the way for the system most airliners still use today. The cabin was pressurized using air rerouted from the engine’s turbo supercharger, which was then pushed through a compressor outlet, controlled manually in-flight by the onboard engineer. All this provided the flight crew and passengers with a cabin altitude of about 12,000 feet, which was outstanding for the time, but nowhere near as comfortable as, for example, a Boeing 787 Dreamliner, which has a reported cabin altitude of 6,000 feet. Passengers flying out from Denver, Colorado probably don’t even notice a difference!

The One and Only Lockheed XC-35

After these extensive modifications (read: rebuilding the whole dang thing), the Electra was transformed into the XC-35, the only one of its kind. After flight-testing at the Lockheed plant in Burbank, CA, the plane was delivered to Wright Field in Ohio to complete its first performance flight. 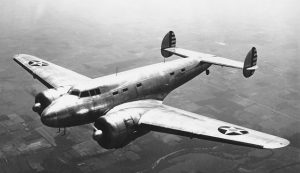 The Lockheed XC-35 in flight

On August 5th, 1937, Army Corps pilots took the Lockheed XC-35 for a spin, exhibiting its many outstanding capabilities to reporters and military officials alike. Without the use of supplemental oxygen masks or suits of any kind, the pilots achieved a maximum speed of 350 mph, while maintaining an average altitude on their 220-mile flight of 20,000 feet.

The Lockheed XC-35 met and exceeded each expectation placed in front of it, earning the Army Air Corps the Collier Trophy, an annual aviation award administered by the US National Aeronautic Association, earned by those who have made “the greatest achievement in aeronautics or astronautics in America, with respect to improving the performance, efficiency, and safety of air or space vehicles, the value of which has been thoroughly demonstrated by actual use during the preceding year.”

Moving From Military to Civilian Transport 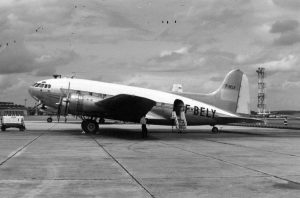 With this award and the confidence to go with it, the Army Air Corps allowed the XC-35 to become the executive transport of Louis Johnson, the assistant secretary of war at the time, and future Secretary of Defense. Soon after, pressurized aircraft entered the realm of commercial aviation when Pan Am Airways ordered two Boeing 307 Stratoliners for its fleet, making the Stratoliner the first pressurized commercial transport.

Nowadays, the Lockheed XC-35 is hidden away in the Smithsonian, and most airline passengers only think about pressurized cabins when they complain about the smell of stale air. As astrophysicist, cosmologist, author, et al. Neil DeGrasse Tyson once said, “When the flight attendants say, ‘The cabin is pressurized for your comfort,’ they mean, ‘So you don’t die from oxygen deprivation.’” So, the next time you’re contemplating those small, round double-paned windows covered with fingerprints and some unidentifiable slime, able to withhold up to 5,000 lbs of pressure, take a deep breath and consider how far pressurized cabins have come!