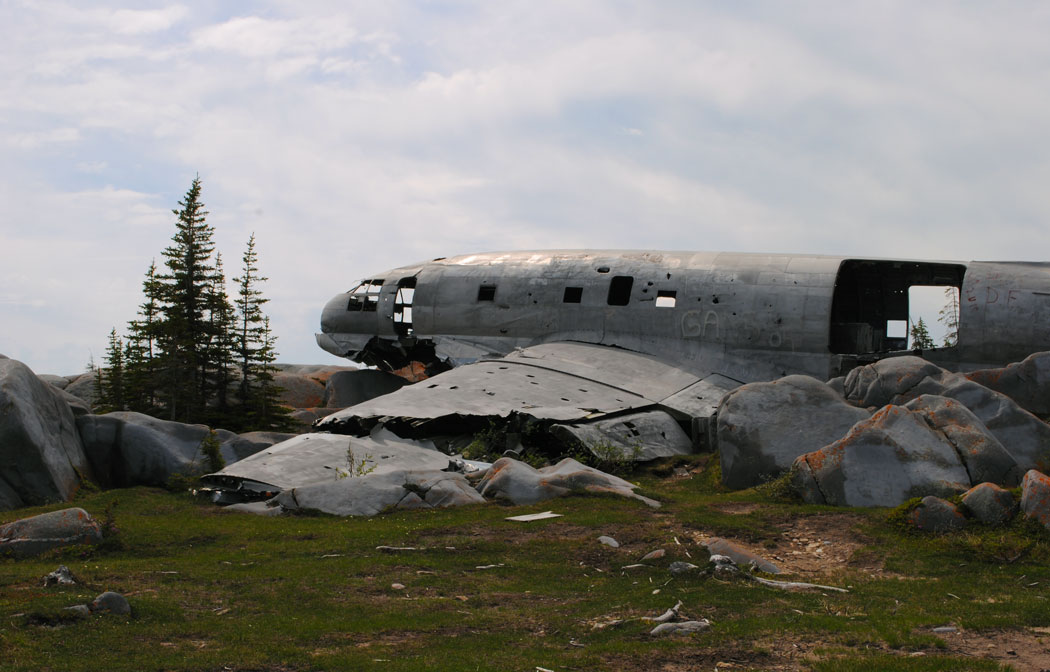 The World of Aviation Archaeology and Searching For Aircraft Wrecks

Lieutenant Colonel William Rankin served as a pilot with the US Marine Corps and was a World War II and Korean War veteran.  But he is best remembered as being the only known person in the world to survive falling into and all the way through a cumulonimbus storm cloud to the ground.  He literally fell through a thunderstorm and lived.  Which, as far as being remembered for something, that ranks pretty high on the awesome scale. Rankin documented this amazing feat of survival in a book called The Man Who Rode Thunder.  Sadly, the book is out of print, and the few rare copies still in circulation generally carry a hefty price tag.

The thunder riding incident happened on 26 July 1959.  Rankin and wingman Herbert Nolan were flying a pair of F-8 Crusaders from the Naval Air Station at South Weymouth, Massachusetts to the Marine Corps Air Station in Beaufort, South Carolina.  To keep above some nasty looking storm clouds that peaked somewhere around 45,000 feet (13,716 m), Rankin and Nolan had climbed to 47,000 feet (14,326 m) and were cruising at a brisk Mach 0.82 (roughly 624 mph).  Shortly before they were set to start descending, Rankin heard what he described as a loud bump and rumble from the engine.  (This is quite possibly one of the worst scenarios possible to start hearing dire engine noises.)

The engine abruptly stopped, and warning lights began flashing.  Rankin transmitted a brief message to Nolan “Power failure.  May have to eject.” and then pulled the lever to deploy auxiliary power for the aircraft.  The lever broke off in his hand.  As the unpowered aircraft began to heavily nose down, Rankin considered his options.  He knew that his extreme altitude presented several problems such as frigid temperatures, severe decompression, and almost non-existent levels of oxygen.  Even worse, Rankin wasn’t wearing a pressure suit.  Finally, at 6:00 PM, after assessing the aircraft as unrecoverable, Rankin pulled the twin ejection handles and shot into the atmosphere.  At 47,000 feet.  Into air that was currently -58 °F (-50 °C).  And because that wasn’t a crappy enough set of circumstances, Rankin was served up a nice, fresh slice of ‘insult to injury’ when the glove on his left hand was ripped off during ejection.  Rankin suffered instant discomfort as the decompression caused his abdomen to swell painfully and blood to leak from his eyes, nose, ears and mouth.  As he plummeted through the air, he was able to breath thanks to an emergency oxygen supply.

After roughly 10 seconds, he hit the top of the thunderstorm.  The severe cold, made worse by turbulent winds, added frostbite to Rankin’s growing list of problems, particularly on his bare left hand.  Rankin’s parachute was equipped with a built in barometer and was set to automatically deploy when it reached an altitude considered safe for breathing.  And though Rankin could manually pull the rip cord to deploy his parachute, he was familiar enough with the circumstances to resist that urge.  It was cold, and his oxygen was limited, and if the parachute was deployed while he was too high, it could prolong his descent to the point where he could die from asphyxiation or hypothermia.  Given normal circumstances, Rankin could expect to reach a breathable altitude of 10,000 feet in roughly three to four minutes.  At which point his parachute would deploy, and he would descend at a more moderate speed the rest of the way down.

However, as you may have noticed, a sizable and raging thunderstorm was currently smashing those normal circumstances into tiny, tiny pieces.

As William Rankin fell through the upper reaches of the thunderstorm, his visibility was reduced to near zero.  Rankin fell for what seemed to him a long time.  Long enough that he began to worry that the barometric sensor and automatic switch on his parachute had been damaged.  Finally, he felt an upward tug on his harness as the parachute deployed.  Though he couldn’t see the parachute above him, Rankin tugged on the risers and was satisfied that it had deployed and inflated properly.

Unfortunately, Rankin was nowhere near 10,000 feet.  Strong updrafts within the thunderstorm had greatly slowed his descent, and the chaotic storm conditions had prematurely triggered the barometric sensor and automatic switch.  And with the parachute now deployed, Rankin was even more susceptible to the updrafts.  He was caught and dragged thousands of feet back up into the sky, before once again falling.  This sequence repeated over and over, so many times that Rankin lost cost.  Eventually, he also lost his lunch. “At one point, I got seasick and heaved,” he recalls.

Alarmingly, Rankin was not alone in this up and down cycle.  Hailstones began forming alongside him, and he was soon being pelted with shards and balls of ice.  And though that was bad enough, Rankin worried the ice would eventually get big enough to start shredding his parachute.  Incredibly, Rankin also had to deal with one further problem.  The air around him became so saturated with water that he frequently had to hold his breath and carefully choose when he attempted to breathe in air to avoid breathing in mouthfuls of water and succumbing to the suddenly very real possibility of drowning in the sky.

As Rankin danced on the razor’s edge, carefully balancing all these concerns, lightning flashed all about.  Rankin described seeing blue blades several feet thick arcing around him, followed instantly by concussive blasts of thunder he felt rather than heard. At one point in the midst of all this chaos, a lightning bolt lit up Rankin’s parachute with brilliant light, causing him to momentarily believe he’d died.

Finally, mercifully, the violence of the storm started to die down, the updrafts finally released Rankin from their grasp, and he started to descend.  Temperatures became noticeably warmer as Rankin left the thunderstorm behind, descending into a much gentler summer rainstorm. Rankin was alive, his parachute was intact and he was descending toward the forests of the North Carolina backcountry.  As he prepared to land, the storm couldn’t resist one final poke, and the wind kicked up, flinging him into a stand of trees.  His parachute became tangled up in the branches, and Rankin’s momentum carried him headfirst into the trunk of a tree.  Thankfully, his flight helmet absorbed most of the blow, saving him from serious injury.  Rankin extracted himself from the tree, and when he checked his wristwatch, it read 6:40.  He had just survived a brutalizing 40-minute fall through a raging thunderstorm from nearly 9 miles in the air.

Rankin set out to locate help, and eventually found his way to a backcountry road.  After a series of unsuccessful attempts to flag down passing vehicles, one finally stopped and gave Rankin a ride to a store in the nearby town of Ahoskie, North Carolina.  From here, Rankin called an ambulance and was ferried to the hospital where he was treated for frostbite, decompression, and generally getting the stuffing beat out of him.  His injuries were surprisingly minor considering he’d just gone ten rounds with a thunderstorm, and he recovered nicely over the course of some weeks.

William Rankin eventually returned to duty, wrote The Man Who Rode Thunder, and lived another five decades.  He died on 6 July 2009, just 20 days shy of what would have been the fiftieth anniversary of his amazing fall.  Though other people, such as para-glider Ewa Wisierska, have survived their own dangerous encounters with storms, Lieutenant Colonel William Rankin remains the only person in history to survive falling through one.