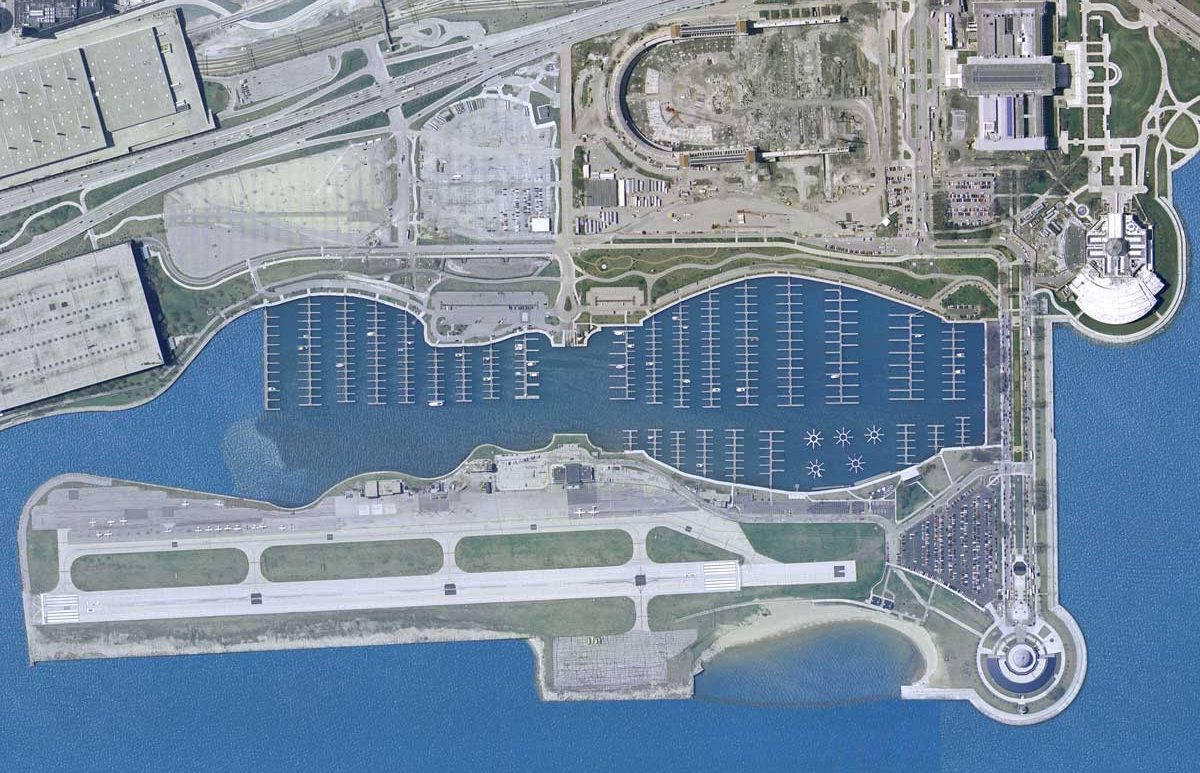 Looking Back: The Ravaging of Meigs Field

The Legacy of the Rutan Brothers

Nearly a century after the Wright Brothers made aviation history (or should I say, started it?), another team of brothers continues to make contributions just as significant as their predecessors. Between Dick Rutan and Burt Rutan, they’ve won Silver Stars, Collier Trophies, Presidential Citizens Medals, and made both the first non-stop, unrefueled airplane voyage around the world and the first private aircraft to go into space.

Things being as they are between brothers, older brother Dick often wouldn’t let Burt play with their model airplane toys. Burt wouldn’t let this stop him from playing with airplanes, so he designed and built his own toy aircraft. This foreshadowed nearly the rest of the course of their lives.

Both Burt and Dick were very active in model airplane clubs, and Burt’s designs often won many model airplane competitions. When the brothers were old enough they moved up to bigger aircraft. They took flying lessons as teenagers and received their pilot’s licenses. Dick actually earned both his driver’s license and pilot’s license on the day he turned 16.

Getting Serious in Aviation

Dick Rutan joined the Air Force Aviation Cadet Program when he was 19 and earned a Bachelor of Science degree through American Technological University while serving in the Air Force. Dick was commissioned as an officer and went on to serve in Vietnam. 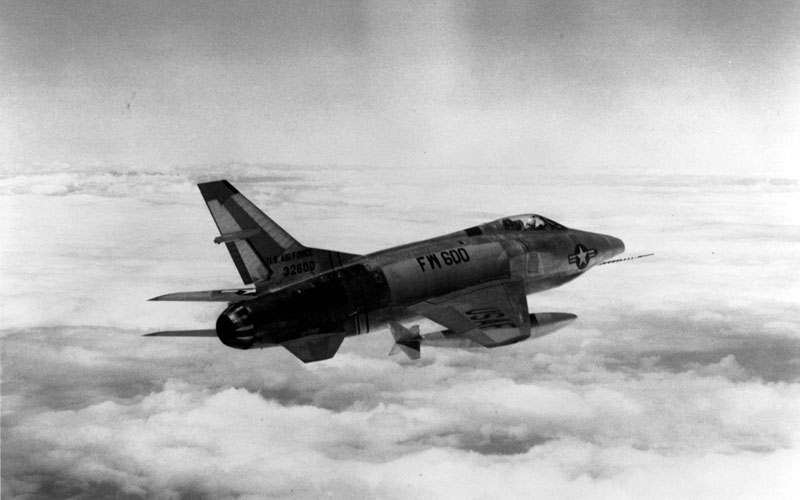 Dick’s flying skills made him a pick for the Air Force’s secretive MISTYs, where he flew the F-100 Super Sabre ahead of strike packages and marked targets with white phosphorous rockets for the strike aircraft to hit. He flew a total of 325 missions in Vietnam with 105 of those missions with MISTY. Most pilots didn’t survive this long, and Dick’s number was up on his 325th mission in 1968. He was shot down, ejected over enemy territory, and evaded capture until he was picked up by friendly forces. He returned to the United States and his missions in Vietnam earned him the Silver Star, five Distinguished Flying Crosses, 16 Air Medals, and a Purple Heart. Dick Rutan retired from the Air Force a lieutenant colonel in 1978.

While Dick was flying in Vietnam, Burt Rutan entered California State Polytechnic University and earned a degree in aeronautical engineering in 1965, graduating near the top of his class. His first job out of college was rather serious, working as a civilian flight test project engineer with the U.S. Air Force at Edwards Air Force Base. Among the many projects he worked on, he was charged with saving the F-4 Phantom. This costly aircraft had a tendency to enter mostly unrecoverable flat spins. Burt designed a way to stabilize the aircraft and a way to recover it should it enter a flat spin. Burt worked as a flight test engineer for eight years, until 1972. In 1974, Burt founded the Rutan Aircraft Factory.

Burt’s aircraft manufacturing business was doing well. He mostly designed and produced home-built kits for experimental aircraft enthusiasts, building on designs he started while in college. The VariViggen was his first aircraft design and featured a canard configuration that would become a signature feature in many of his aircraft designs. Dick joined the company after retiring from the Air Force, taking over as Production Manager and Chief Test Pilot.

Dick had the dream of completing aviation’s last big milestone – a circumnavigation of the globe, non-stop and unrefueled. The brothers were having lunch with fellow pilot Jeana Yeager (no relation to sound barrier shattering Chuck) in October 1981 when they conceived of the design and quickly sketched it on a napkin. It went from napkin to reality within a few years.

This aircraft, Voyager, made its maiden flight on June 22, 1984. It was constructed using mostly funds from private donors and under the name Voyager Aircraft, Inc. Voyager was huge, with a wingspan of 115 feet. But it was light – the structural weight was only 939 pounds, owing to construction of graphite, fiberglass, and Kevlar. Loaded with its engines and fuel, however, it tipped the scales at 9,965 pounds – ten times its structural weight. Voyager had two aircraft engines – a “tractor” Continental O-240 in the front to assist with takeoff and climbout, and a “pusher” Continental IOL-200 engine in the back as its main cruising engine.

Dick Rutan and Jeana Yeager were ready to make the historic attempt after two years of flight testing. They took off from Edwards Air Force Base on the morning of December 14, 1986. The takeoff wasn’t pretty; they ended up using 14,200 of the runway’s 15,000 feet, and the heavy wings bowed down and struck the runway, sheering off the winglets. Burt Rutan made the decision that the aircraft could still complete its mission and they continued.

Dick and Jeana had planned on flying in three-hour shifts, but the control forces were so strong when the aircraft was heavy that Dick ended up flying for nearly the first three days. The cockpit wasn’t much bigger than a telephone booth and there wasn’t much room for movement or getting into a comfortable sleeping position. It would be a long, stressful journey.

The two pilots had a few unexpected surprises that put the success of the mission in doubt and added even more stress. Poor weather forced them to make unplanned changes to their flight path, including a 600-mile detour around a typhoon. They also had to detour around Libya, which denied them clearance following the recent military Operation El Dorado Canyon. These changes really ate into their already tight fuel allowance.

Towards the end of the flight, one of the fuel pumps failed. Redundancy was built in and another pump picked up the duties. As it was, Voyager made it back to Edwards with only fifteen gallons of fuel remaining. They landed in front of over 55,000 spectators and news stations broadcasting live all over the world. The flight lasted almost exactly 9 days (216 hours) and covered 26,366 miles. They shattered the previous distance record of 12,532 miles flown by a B-52 crew in 1962. In addition to the circumnavigation and distance records, they also set an endurance record.

President Ronald Reagan awarded both Dick Rutan, Burt Rutan and Jeana Yeager the Presidential Citizens Medal of Honor, only awarded 16 times in history up to that point. The flight also won the 1986 Collier Trophy, the Louis Bleriot Award, and the De la Vaulx Medal.

Voyager now hangs from the rafters of the Smithsonian Air and Space Museum, alongside the Wright Flyer, the Spirit of St. Louis, and the Bell X-1. The late Steve Fossett is the only other adventurer to repeat this feat (and in another one of Burt Rutan’s aircraft, the GlobalFlyer).

Burt Rutan started another company, Scaled Composites, in 1982 with the purpose of designing research aircraft. Scaled Composites is best known for SpaceShipOne, the first civilian aircraft to make it into suborbital flight and Ansari X-Prize winner. SpaceShipOne was developed with funding mostly from Microsoft cofounder Paul Allen and won the $10 million prize just six months before the deadline.

This was a major milestone in the advancement of civilian space travel, and Burt Rutan won the National Academy of Sciences Award in Aeronautical Engineering for the design. The team also became the winners of the 2004 Collier Trophy. Virgin Galactic licensed the design for space tourism and testing continues today. Sadly, one of the test ships, SpaceShipTwo, broke up during a 2014 test flight, killing the copilot and severely injuring the pilot.

Scaled Composites has designed and produced many other innovative aircraft, and even designed the rigid sail for the yacht that won the 1988 America’s Cup sailing race.

Dick Rutan continued to pursue many other adventures in aviation and earned his balloon license in 1995. In 1998 he attempted the first round-the-world flight in a balloon, but this flight only lasted three hours before a helium cell burst. The crew bailed out from an altitude of 6,000 and the capsule hit the ground in Texas, exploding into a large fireball. This would be the third time Dick bailed out of an aircraft. The accident didn’t stop his pursuit and he vowed to try again, but terminated his attempt when another team beat him to the record.

In 2001 Dick started flight-testing of a rocket-powered version of Burt’s Long-EZ design, called the EZ-Rocket. He had already set a record in a Long-EZ by flying 3,965 miles from Anchorage, Alaska to Grand Turk in Turks & Caicos. In December 2005, flying the EZ-Rocket, he set the record for the longest distance by a ground-launched rocket. This flight has been affectionately called the “longest shortest flight”, as it only took him 8.6 miles from the Mojave Spaceport to California City Airport. No matter, the flight was an important advance in the future of rocket-powered aircraft and won him many prestigious aviation awards.

The flight of the Voyager is up there with the achievement of the Wright Brothers, the launch of Yuri Gagarin, and Armstrong’s first steps on the moon. It was an incredible achievement when you really think about what it took to complete. They proved that aircraft could be built lighter and flown longer. Not to mention the physiological challenges of such a long and stressful flight.

Dick Rutan and Jeana Yeager were #33 of Flying magazine’s 51 Heroes of Aviation for the Voyager flight, and Burt Rutan is #18 on the same list for his designs.

Burt recently retired from Scaled Composites to his home in Idaho. He has six aircraft on display in the National Air and Space Museum, the most recently added being SpaceShipOne.

Dick continues to fly and occasionally speaks at lectures, recounting his Air Force days, record-setting flights, and the time in 2000 he was stranded at the North Pole (he was a passenger on a sightseeing aircraft that broke through the ice). Dick was inducted into the National Aviation Hall of Fame in 2002.