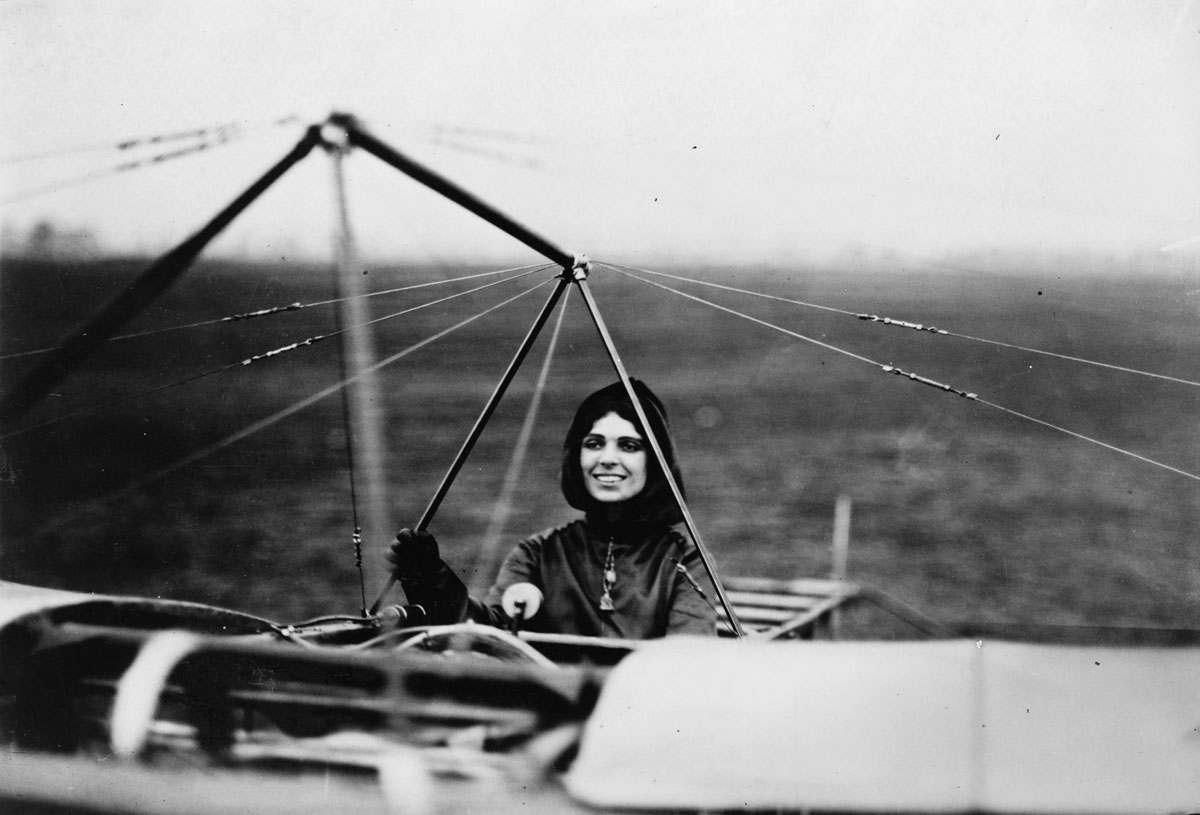 Could We Save the Only Remaining Stinson A Trimotor Aircraft?

In the summer of 1968, three companions and myself abruptly left our jobs in Glacier National Park in Montana to “seek fame and fortune in Alaska,” the lure of a devastating fire season too much for adventurous young men to ignore.

Upon employment from the BLM office in Fairbanks, our first mission was to land on Lake Minchumina to begin our firefighting experience. The first morning, the breathtaking view of Mt. McKinley was soon replaced by back-breaking work culminating with getting burned out of our first fire after four or five days. Helicopters picked us up as our tents and personal belongings were burning several feet away. Chainsaws were not part of our equipment as it was too difficult to supply us with gasoline, so a palaski (axe on one side, grub hoe on the other) and a sharpening stone comprised our weaponry.

A BLM official came around the camp looking for a crew to volunteer to supposedly save the only remaining example of an old airplane called a Stinson A Trimotor for the Smithsonian Institute. The aircraft was in the path of a massive fire. Figuring that things couldn’t get much worse for us and the promise of a few more dollars on our next check (not to mention being completely naive to the power of Mother Nature), our crew immediately raised our hands.

The next day, August 11, a helicopter set our crew of sixteen men down near the Stinson Trimotor somewhere near the Toklat and Kantishna Rivers to prepare for the oncoming fire. We figured we had about 24 hours to dig a fire line down to permafrost, cut the existing trees down, drag them to the outside of the fire line, and back-burn the fuel before the fire hit. We worked feverishly to prepare for the onslaught, resting only when we dropped from exhaustion. I marveled at the very reason for our task, as the Stinson Trimotor, partially dismantled, was the most incredible aircraft I had ever seen. The interior appeared to be in excellent condition and with a little imagination, it was easy to imagine what a splendid machine it was in its prime.

We thought we were pretty well prepared as the fire reached an old CAT a mile or two away that we were told had broken down trying to get the Stinson out sometime before. With a great explosion of the fuel drums, we knew our time was near. As the front hit us, the incredible heat, smoke, and wind generated by Z-83 (the BLM fire designation) defied comprehension and lies in my memory as the most vivid reminder of my insignificance in the grand plan of things. As an 18-year old boy, the next few days would transform me into a man with a little greater appreciation for life.

The only thing we could do with the fire was to constantly walk around the fire line and put out any spot fires that may have jumped. The smoke was so intense that the only way one could breathe was to drop to the ground, put your face on the tundra, and breathe the air pockets. Visibility was nil and the heat incredible. Thank God for Visine! We ran out of food on about the third day, drinking water was nearly gone, and our radio to the outside broke down. We were later told that BLM headquarters had pretty much given us up for lost and were contemplating notifying next of kin. Needless to say, we survived, but it certainly was no picnic. I recall having a rousing game of poker inside the Stinson A, although just being alive was the biggest jackpot we could think of at the time. 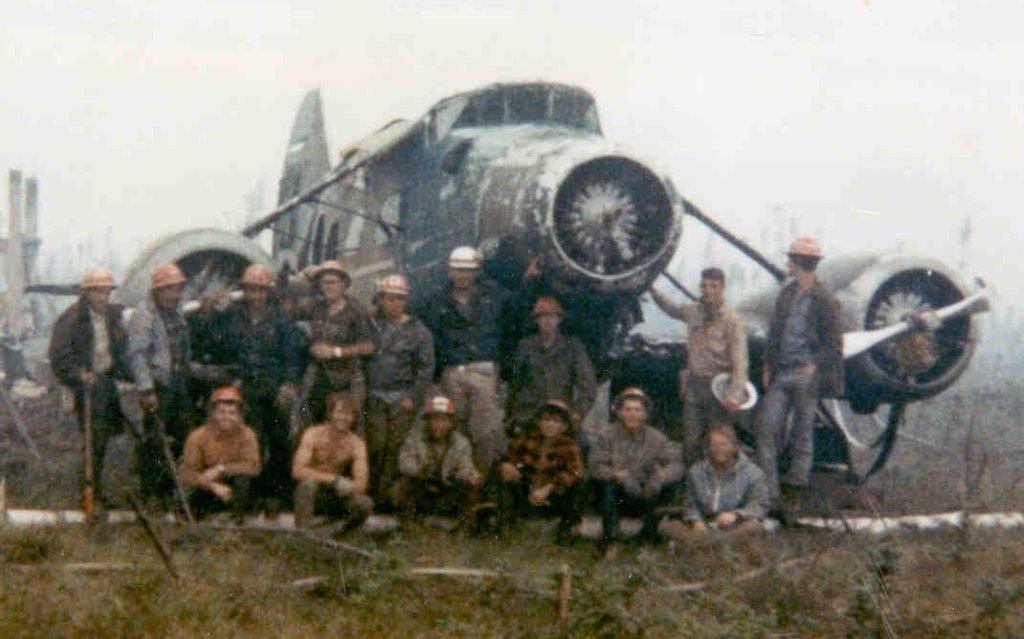 As the 100,000 acre Stage 5 fire (inferno) finally blew past us, we realized what had happened and the symbol the Stinson Trimotor played in the fragile mortality of sixteen men. We made a small cardboard plaque out of a K-Ration box and put our names and events that had occurred with the desire that if the plane ever made it out of the tundra, our small contribution might be remembered.

A snapshot was taken on the fourth day, August 14, by one of the guys who sent me a small print later that fall. The most vivid picture, however, resides only in my mind as the helicopter raised up to take us home. The two acres or so within the fire line was resplendent green, and as far as you could see in every direction was starkly black. And the Stinson Trimotor sitting in the center of the green circle, looking so proud and incredibly alive, remains as one of the most significant and indelible images of my life.

So much for ancient history…

A writer friend of mine finally tracked down the Stinson Trimotor in 1992 and re-kindled my interest after nearly 25 years of wondering what had ever happened to it.

I found that in 1964 J.D. “Red” Berry acquired rights to the plane that had crash-landed in 1947 and spent the next eight years getting it out of the tundra. Berry wrote a very interesting and entertaining book called “Stinson Tri Motor Recovery.” The aircraft was then purchased by Eugene Coppock in 1970, who spent from 1972 until 1979 rebuilding the Trimotor and finally flew it for the first time in July of 1979. The Alaska Aviation Heritage Museum purchased the Trimotor in 1988 and considered it the jewel of their impressive collection. Greg Herrick, a private collector, then purchased and had the aircraft restored in 1998 (click here for an article detailing that restoration) and it is currently housed in Minnesota. The plaque we made was never found and I have never been in contact with any of the other fire crew members.

I have slowly been gathering information not only on NC15165 but also on the other 30 Stinson A (low-wing) Trimotors that were produced. Every piece of information helps, such as articles, pictures, kits, specs, and advertising. I have put together a pretty good collection of information that I would gladly share with anyone that has an interest. (My email is available by clicking on the icon in the author bio below.) I’d also greatly appreciate any information on how to pursue any possible research sources. 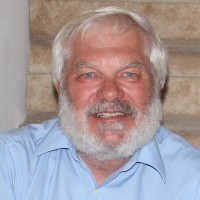 Doug Lutz
View More Posts
Doug Lutz, 66 years old, has had a remarkable lifetime of fascinating careers. From owning a saloon in Montana; flying in helicopters and blowing up dynamite in the oil and gas exploration industry; working in numerous toxic hell-holes in the hazardous waste business, being a bank president in Colorado and New Mexico and finally as a civil servant at the Albuquerque International Sunport. He shares a wonderful historic home in Albuquerque, New Mexico (that houses one of the finest collections of exotic animals in the world) with his talented artist/teacher wife, Carol, two sons, Cody and Colter, both in college, and a pair of standard poodles.