Scott Crossfield: An Incredible Fusion of Pilot and Engineer

NAPALM BATS: the fascinating and bizarre story behind the military’s attempt to create a Bat Bomb!

For almost as long as we’ve had organized militaries, animals have been a significant part of them. Horses revolutionized combat; Hannibal used Elephants to conquer the Alps and deal devastating blows to Rome; carrier pigeons and other birds have provided cheap and effective ways to relay messages during times of war; and in modern times, bomb-sniffing dogs are put to great use to help keep us safe.  Throughout history, many animals were also trained to attack along with their masters, such as warhorses, hounds, and Hannibal’s elephants.  And examples abound of even more crazy attempts at creating animal soldiers, such as training dolphins to set underwater mines.  Thankfully, for most animals, technology has advanced to the point where we no longer need to rely on them for combat.  But truly one of our more bizarre attempts to weaponize animals has to be the bat bomb.

Yes, you read that right: a bat bomb.  Now, to be clear, this was not a bomb shaped like a bat or one that used ‘bat’ as part of its name.  No, this was a bomb that used actual bats to deploy napalm.  Sounds outlandish, but it’s true.  This top secret weapon spent a long time in development and research and was close to actually being deployed before the plug was pulled.  Interestingly, testing done at the time indicates that this had incredible destructive potential, and could have been one of the US Military’s most dangerous weapons.

So how did the bat bomb come about? Lytle S. Adams, a Pennsylvanian dentist and inventor, observed that most Japanese structures were extremely susceptible to incendiary devices, due to widespread use of paper, bamboo and other highly flammable building materials.  His idea was to create bomb casings that would house hundreds of bats, attach small incendiary devices to those bats, load them into the casings, and then drop them over Japanese cities containing industrial and military targets at dawn.  The bomb casing would break apart at a fairly high altitude, releasing the bats, who would then spread over a wide area of the city.  By the time the sun was up, the bats would be roosting all across the city, at which point built in timers would trigger the incendiary devices, causing widespread fires, chaos, and damage.

Interesting idea.  So how did it make it into the hands of the US military?  Well, Adams was a personal friend of First Lady Eleanor Roosevelt, so she presented the idea directly to President Franklin D. Roosevelt.  President Roosevelt took the idea to the National Defense Research Committee, where it was reviewed by noted Zoologist Donald Griffin, who advised the President to approve the idea for research.

Four factors made this an attractive idea to the NDRC:

1. Bats occur in large numbers in the US, making it easy to find volunteers.  In New Mexico alone, four cave systems each house several million bats.

2. Bats can be induced to hibernate, and while hibernating, do not require food or maintenance.

3. Bats fly during the evening, and then find secluded, dark places to roost when it gets light, such as attics, eves and cubbyholes in buildings.

4. Bats can carry more than their body weight in flight, making them able to carry a decent size of incendiary device.

So, with the project approved and funded, the US military got to work.  By March 1943, they had settled on the Mexican free-tailed bat as their delivery method.  The bats would be cooled to induce hibernation, and then loaded into the 26 stacked trays in the bomb casing, each of which had compartments for 40 bats.  These bombs, dropped at roughly 5,000 feet (1,525 m) would fall to about 1,000 feet (305 m) before deploying a parachute and breaking open, exposing the trays of bats.  The US military figured 10 B-24 Bombers flying from Alaska, each loaded with 100 bat bombs, would be able to deliver just over a million bats to the industrial cities surrounding Osaka bay. Which would, in turn, create mass fires.  The last thing to figure out was how to create the incendiary devices that would be attached to the bats.  To handle this, they turned to an expert on all things incendiary: Louis Fieser.

Fieser, the inventor of military napalm, designed 0.6 ounce (17 g) and 1 ounce (28 g) kerosene incendiary micro-bombs.  The smaller bomb would produce a ten inch flame that would burn for about 4 minutes, and the larger one would produce a 12 inch flame that would burn for about six minutes.  These micro-bombs also came equipped with a time delay fuse, which used a solution of copper chloride to corrode a small wire that held back the firing pin.  Once the wire was corroded enough, it would break, release the firing pin, which would start the kerosene burning.  To attach these bombs to the bats, they used a surgical clip and piece of string.  In theory, once the bats were released from the bomb at 1,000 feet, and flew off into the city to find a proper hiding place, they would land somewhere, bite through the string and dislodge the surgical clip.  Once they were free of the micro-bomb, they would fly away, leaving the bomb to work its firey magic.  If the bat was unsuccessful in freeing itself from the bomb in time, well, you can’t make an omelette without cracking a few eggs.  Or in this case, frying a few bats.

So, with all the elements in place, the military began testing the bat bomb.  The first test was on May 21st, 1943 at Muroc Dry Lake, California, the future site of Edwards Air Force Base.  Roughly 3,500 bats had been captured from caves in New Mexico, and to start them hibernating, they were loaded into refrigerators.  These bats were then loaded into a dummy bomb and dropped from a B-25 Mitchell flying at 5,000 feet.  Most of the bats, however, did not wake up from their chilly nap, and rather than take flight, they simply crashed into the ground.  And while some bats did take flight, most of them were able to escape.  Between casualties and escapees, the military was going through bats quickly.  The testing was relocated to an Army auxiliary airfield near Carlsbad, New Mexico, probably at least in part due to much easier access to bats.

After a few more dry runs, the Army finally began attaching the real incendiary devices to the bats.  Things did not go well, however, as some bats escaped, and set fire to a nearby aircraft hangar, and a car belonging to an Army general. 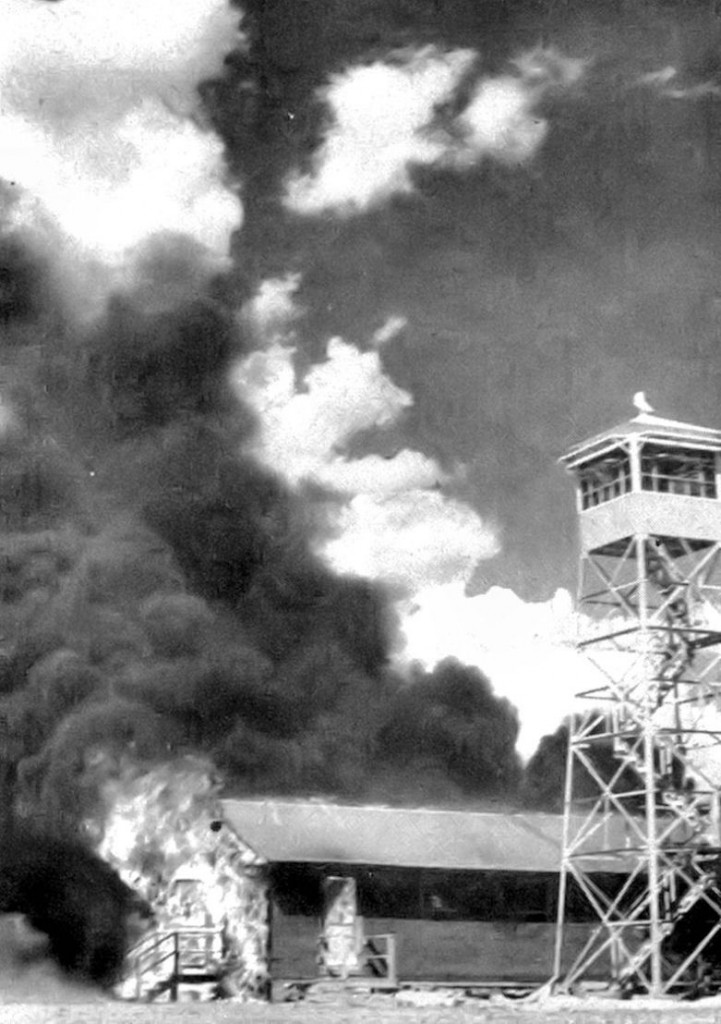 All in all, the Army went through about 6,000 bats before deciding this wasn’t a good idea.  But rather than eighty-six the project, in August 1943, the Army decided to pass it on to the Navy and Marine corps.

The Navy and Marine Corps take on the Bat Bomb

The Marine corp, unsatisfied with the Army’s lack of naming prowess, immediately renamed the endeavor to Project X-Ray and relocated the testing to the Marine Corps Air Station at El Centro, California.  By December of 1943, the Marines had managed to successfully launch the bats from altitude and start at least 30 fires.  According to notes, most of the fires burned out, but at least four would have been significant enough that if started in an urban area, they would have required professional firefighters to extinguish them.

Heartened by this progress, the Marines decided to put the bat bomb to the ultimate test.  They took Project X-Ray on the road and headed for the Dugway Proving Grounds in Utah, the location of the Japanese Village.  Built earlier in 1943, this mockup of a Japanese residential district had been used to successfully test other incendiary devices, including the deadly M-47 Bomb and M-69 Incendiary Cluster Bomb that were used in the firebombing raids on Tokyo during World War 2.

Those present at the Dugway test were very optimistic.  The chief of incendiary testing at Dugway noted: “A reasonable number of destructive fires can be started in spite of the extremely small size of the units. The main advantage of the units would seem to be their placement within the enemy structures without the knowledge of the householder or fire watchers, thus allowing the fire to establish itself before being discovered.” The chief chemist’s report stated that based on weight, Project X-Ray was a more efficient incendiary device than any other tested: “Expressed in another way, the regular bombs would give probably 167 to 400 fires per bomb load where X-Ray would give 3,625 to 4,748 fires.”  And finally, the observer on hand from the NDRC stated simply: “It was concluded that X-Ray is an effective weapon.”

Additional testing and experimentation on the bat bomb was planned for August 1944, and the Marines believed they could have the bomb ready to deploy against the Japanese by mid-1945.  However, upon hearing that Project X-Ray was going to take at least another year, Admiral Ernest J. King, Chief of Naval Operations, kiboshed the whole venture.  It’s thought that this kiboshing was due at least in part to the rapid advancement of nuclear weapons testing, which overtook the more casual timeline of the bat bomb.  By the end of Project X-Ray, an estimated $2 million dollars had been spent on the bat bomb.

Adams, after the end of the war, maintained that bat bombs would have been as effective as nuclear bombs,  and is quoted as having said: “Think of thousands of fires breaking out simultaneously over a circle of forty miles in diameter for every bomb dropped. Japan could have been devastated, yet with small loss of life.”

Whether or not he was correct in that assertion, Project X-Ray was never picked up again and remains a strange sidenote in Military experiments to weaponize animals, much to the delight of bats everywhere.